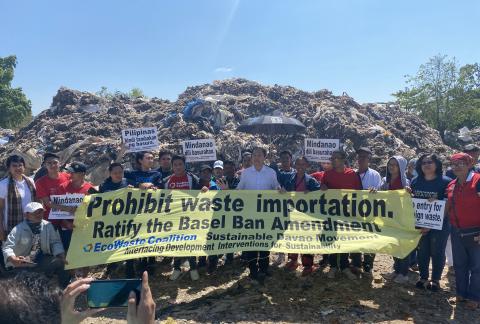 Quezon City, PhIlippines After sitting in Northern Mindanao for two years, the final batch of 80 container vans of contaminated plastic waste from South Korea are set to sail home this week amid the continuing COVID-19 outbreak.

Deceptively declared as “plastic synthetic flakes,” the contaminated plastic waste materials, which arrived in July and October 2018 at the ports in Villanueva and Tagoloan, Misamis Oriental, were found by the authorities to contain unsorted plastic materials, used dextrose tubes, soiled diapers, discarded electronics and household garbage in violation of national laws and the Basel Convention on the Control of Transboundary Movements of Hazardous Wastes and their Disposal.

“The completion of the complicated re-exportation procedures in the middle of the COVID-19 crisis that continues to disrupt and claim people’s lives is a big win in our people's pursuit of environmental justice and the rule of law during these most difficult times,” declared Aileen Lucero, National Coordinator, EcoWaste Coalition.

“As the entry of foreign waste will likely persist unless corrective regulations are put in place, we call upon President Rodrigo Roa Duterte to implement his abhorrence against waste dumping through an order banning the importation of all wastes, including plastics intended for so-called recycling,” Lucero emphasized, noting that the Department of Environment and Natural Resources (DENR) has yet to revoke a policy allowing the importation of waste, including “recyclable materials containing hazardous substances.”

Dr. Joe DiGangi, Senior Science and Technical Adviser of the International Pollutants Elimination Network (IPEN), said that “the return of illegally exported South Korean waste demonstrates that regulatory enforcement can and must continue during the pandemic. Now the challenge for both countries is to ratify the Basel Convention Ban Amendment so that this sad history is not repeated."

DiGangi noted that the COVID-19 pandemic has resulted in a massive increase in plastic waste that may be hazardous and is not recycled including personal protective equipment (PPE) and other healthcare waste, as well as other single-use plastic bags, food take-out containers and many others. "Countries should protect themselves from the possibility of adding to their waste crisis by doing two things. In the short term, countries should move quickly to ratify the Basel Convention Ban Amendment, which prohibits developed countries from exporting hazardous wastes to developing countries. In the mid-term, countries should enact a ban on the importation of all wastes," he said.

Greenpeace Country Director Lea Guerrero likewise pointed out that “the ratification of the Basel Convention Ban Amendment and the enactment of a total ban on waste imports is crucial, especially at a time when the nation grapples with recovery from a global pandemic that has led to the proliferation of medical and household waste.”

“Lack of prohibitions on waste imports and poor enforcement of existing regulations leave the country open to future incidents of illegal waste trade, which often results in recipient countries shouldering the health and environmental costs of foreign waste,” she added.

“As parties to the Basel Convention, we appeal to the governments of the Philippines and South Korea to ratify the Ban Amendment to prevent environmental injustice and to safeguard public health and the environment from the negative effects of the global trade in hazardous wastes and other wastes,” she said.

The ratification of the Basel Convention Ban Amendment and the imposition of a national ban on all waste imports, especially electronic, plastic and other hazardous and toxic wastes, are absolutely necessary to actively prevent the recurrence of waste dumping and trafficking in the Philippines, the groups said.