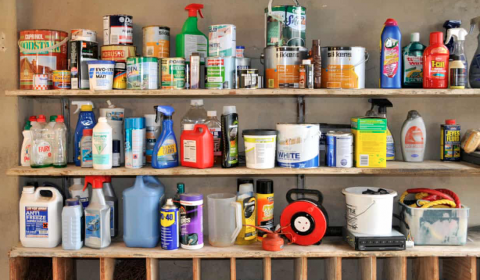 Environment and health groups have fiercely criticised proposals to relax the regulation of chemicals and pesticides in Australia, saying they are “totally at odds” with public health and safety expectations.

A “first principles” review by a panel of experts has recommended to the agriculture minister, David Littleproud, that many household chemicals and pesticides should be exempt from scrutiny by authorities, and that approvals for agricultural chemicals should be fast-tracked if they have been licensed by similar authorities overseas.

The National Toxics Network and Public Health Association Australia said the draft report was a recipe for further deregulation that puts consumers at risk and undermines trust.

The NTN said the panel’s mandate prioritised costs to industry over the environment, and raised questions over the industry links of its chair, Ken Matthews.

Matthews was until very recently the chair of the Agricultural Biotechnology Council of Australia, whose members include the biggest producers, importers and users of pesticides, including CropLife Australia, AusBiotech and the National Farmers’ Federation.

Matthews said he had resigned as chairman of Abca, a position he held since 2015, and the agriculture department had concluded there was no conflict.

He acknowledged environmental groups were “cranky” about his draft report, but said the industry was not pleased either.

Protecting health, safety and the environment

“Overall, the tenor of the recommendations is totally at odds with the public’s growing expectation that a regulator should act to protect our health, safety and the environment from the impacts of Agvet chemicals,” she said.

“The recommendations seek to place rapid access to Agvet chemicals above the protection of health and safety. The inquiry panel has largely relied on industry stakeholder opinions to form its recommendations rather than referring to the scientific evidence to inform the best response to systemic problems and improve the regulator.”

The NTN said Australia already had a very lax system of control of agricultural chemicals, and this would put it further out of step with the EU, the US and Canada.

For example most common neonicotinoids have been banned in the EU because of their impact on bee populations. They have recently been restricted in the US and Canada but are still permitted in Australia. The Australian Pesticides and Veterinary Medicines Authority has said there is no scientific evidence of declining bee populations in Australia but initiated a review in 2019. Paraquat, a herbicide used for weed control since 1961, has been banned in 30 countries and is on a restricted list in the US. In Australia it has been under review for 20 years by the authority and is still sold for commercial use.

One of the panel’s most controversial suggestions is to exempt consumer products from the new regulatory regime on the grounds that most are well tested around the world in agricultural settings before reaching supermarket shelves. Other chemicals such as pool chemicals would also be removed from regulation.

The environmental health committee of the Australian health protection committee, representing health departments around the country, said it strongly disagreed with this proposal and there was significant risk of harm should misapplication of consumer chemicals occur.

“Health agencies around the world have experienced ongoing public demand for increased regulation of the pesticide industry and of pesticides used in and around the home and in public areas,” it said in its submission.

The panel also proposed significant changes to how agricultural chemicals should be regulated. As well as speeding up approvals of chemicals licensed overseas, the panel proposed a form of co-regulation, where data and responsibility would be shared between the regulator and the industry.

Matt Landos, a veterinarian and adjunct professor at the University of Sydney, whose specialty is aquatic species, said the panel was prepared to use overseas approvals to gain registration but was not proposing to use foreign bans on pesticides to withdraw them in Australia.

The panel argued that far too many resources were devoted to registering chemicals and not enough to monitoring residues in the environment or in food.

Matthews said the approach devoted resources to the areas of greatest risk.

“We think Australia has an internationally respected registration system but we don’t think the monitoring and compliance system is up to scratch,” he said.

But there is immense scepticism the resources would be forthcoming for proper surveillance of pesticide residues. Landos said his work with fisheries in the Great Barrier Reef had revealed this was a major problem, yet the panel was recommending only $600,000 a year be dedicated to monitoring.

Matthews denied the proposals were primarily aimed at cutting costs for the industry, although the report estimated it could save at least $160m over 10 years.

The other major change proposed is to remove “use regulation” from the states and make it the responsibility of the commonwealth.

The NTN said this type of regulation was better handled on a local level rather than from Armidale, where the authority was relocated by the former minister, Barnaby Joyce. This led to a loss of senior scientific staff.

Immig and other environmental groups have complained to Littleproud about Matthews’ role.

“Matthew’s position as chair of ABCA was not declared to participants in this review,” Immig said in her letter to Littleproud. “It is also not included in his biographical details in the information provided with reference to this inquiry panel on the government’s website.”

Matthews is a former secretary of the agriculture department and a former chair of the National Water Commission.

CropLife, one of ACBA’s key members, represents 19 companies that sell 85% of crop protection chemicals and and 95% of crop biotechnology products used by Australian farmers. They include most of the biggest pesticide producers and importers, including Nufarm, Bayer, Syngenta, Nutrien, and Sumitomo Chemicals.

CropLife is sceptical about the panel’s proposals, saying the government failed to implement other changes suggested to address the problems caused by APVMA’s move to Armidale.

“On first reading there appear to be many good recommendations and suggested initiatives, however others look to be nothing more than increased layers of bureaucracy that will not go anywhere to addressing the core inefficiencies of the framework,” it said.

CropLife does not support the proposal to remove home and garden and non-urban land management pesticides from the scope of the APVMA, saying it was “unlikely to improve or maintain the trust of the wider community in this matter”.

But it does agree that regulatory effort should be focused on “products of higher regulatory concern”.

A final report is due in May and will need to be discussed by state and federal governments.