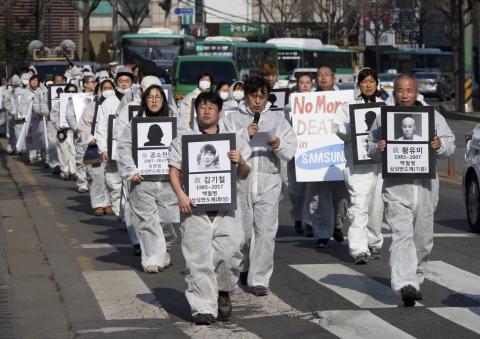 (San Jose, CA, USA) An International Day of Action Against Samsung to protest health, labor and human rights violations by the electronics giant will take place on May Day in Asia, Europe and the United States. The actions, in solidarity with Samsung factory workers everywhere, include delivery of several petitions with over 200,000 signatures calling on Samsung to protect their hundreds of thousands of electronics factory workers around the world.  Demands for transparency come on the heels of a Samsung lawsuit against the South Korean government which seeks to prevent public disclosure of hazardous chemicals monitoring information.

Samsung is receiving increased international pressure to address labor, health, and human rights violations and its refusal to name the dangerous chemicals workers are exposed to in its factories. Samsung, says organizers, is the tip of the iceberg of an industry that must become transparent about chemical use and accountable to health, safety and human rights of workers. In March, three UN Human Rights Experts expressed concern about reports of threats against factory workers and civil society organizations who reported on unhealthy working conditions at Samsung Vietnam factories.

“Hundreds of thousands around the world call on Samsung to protect its workers from toxic exposures and to stop harassing those who speak out,” say event organizers. The international actions and petition demand that Samsung publicly withdraw threats against workers and civil society groups, disclose all chemicals used in its factories, desist from efforts to suppress information, use safer alternatives, and guarantee workers’ right to organize independent trade unions.

Right to know protections are a key demand. “Workers and consumers have a right to know to know what chemicals are used in the production of electronics,” say the petition authors in their demand that Samsung stop suppressing information. In S. Korea, the company recently launched legal action against the government to prevent public disclosure of the chemicals used in its plants. This violates workers' rights to information and undermines compensation for sickened workers.

Coordinators of the day of action say electronics production is chemically intensive with many hazardous chemicals resulting in contamination that has sickened many workers. The South Korean occupational health advocacy group, SHARPS, has documented over 300 cases of cancer and other serious illnesses in electronics industry workers, many of them suffered by workers from Samsung factories. At least one hundred and eighteen Samsung factory workers in South Korea have died due to occupational illnesses since 2007. The South Korean government and courts have connected a growing number of cases of serious occupational illnesses to work in Samsung factories.

The May Day events in cities across Asia, Europe, and USA will include delivery of petitions to Samsung and bring visibility to workers who have become sick working at Samsung plants. The petitions demand that Samsung must withdraw legal actions in South Korea and Vietnam that would suppress chemical monitoring and workers’ abilities to speak about their working conditions. Samsung has actively opposed trade unions for decades. Korean prosecutors raided the company in April and recovered more than 6000 internal documents detailing the company’s anti-trade union strategies and activities. The petitions and actions call on the industry giant to honor workers’ right to free association and participation in unions and for Samsung to support independent health and safety committees in all of its factories.

The groups also demand that Samsung withdraw threats against organizations that have revealed violations. Samsung Vietnam, for example, where more than half of the world’s new Galaxy phones are produced, levelled threats against researchers and workers involved in a revealing report. Concerns over Samsung factory working conditions emerged from a report by the Hanoi-based Research Center for Gender, Family, and Environment in Development (CGFED) and IPEN about the working conditions of Vietnamese Samsung factories. Workers reported high noise levels, joint problems from standing long hours, fainting and dizziness, and miscarriages that are “common”. Instead of actions to support worker health, Samsung launched a disinformation and suppression campaign against their workers and CGFED for speaking out.

Under the UN Guiding Principles on Business and Human Rights, point out the health and labor advocates, the company is required to comply with national laws, provide a safe and healthy working environment, allow workers to form independent trade unions, and allow for freedom of expression.

Editors and journalists interested in covering the events, in interviews and photos and footage of the events, please contact: Ted Smith, ICRT, tsmith@igc.org; 1(408)242-6707.