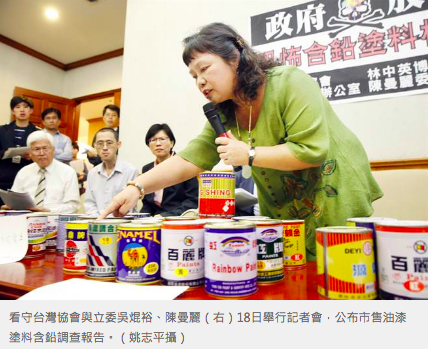 (Taipei City, Taiwan) More than sixty percent of paints analyzed in a new study on total lead in solvent-based decorative paints contained high lead levels, and at least one paint from all eight brands analyzed contained exceedingly high lead levels. The findings are included in a report released today by Taiwan Watch Institute and IPEN. Moreover, most paint can labels failed to carry consumer information about lead content.

“The health impacts of lead exposure on young children’s brains are lifelong, irreversible and untreatable,” said Xavier Sun, Researcher, Taiwan Watch Institute. “We are limiting our children and our nation’s future intellectual development even though safe and effective alternatives are already in use and widely available in Taiwan. We must reduce this critical source of lead exposure to young children.”

“Continued use of lead paint is a primary source of childhood lead exposure,” said Dr. Sara Brosché, IPEN’s Global Lead Paint Elimination Campaign Manager. “Children – especially those under 6 years of age – ingest or inhale lead through exposure to dust or soil contaminated with lead-based paint and normal hand-to-mouth behavior. Lead is also introduced into the gastrointestinal tract when children chew on objects such as toys, household furniture or other articles painted with lead paint. We must enact government regulations on the use of lead in paint in order to minimize childhood lead exposure and safeguard their health. But paint companies do not need to wait for regulation; they can and should act now.”

Although volatile organic compounds (VOCs) and formaldehyde levels in paints are regulated in Taiwan, there is no regulation prohibiting or limiting the use of lead in paints, according to the Bureau of Standards, Metrology & Inspection, Ministry of Economic Affairs.

Most highly industrial countries adopted laws or regulations to control the lead content of decorative paints—the paints used on the interiors and exteriors of homes, schools, and other child-occupied facilities—beginning in the 1970s and 1980s.  The strictest standard, 90 parts per million (ppm) total lead content in decorative paint, is common in many countries, including the Philippines, Nepal and the United States of America. Several other countries, including Singapore and Sri Lanka, have a 600 ppm total lead standard.

In August and September, 2015, Taiwan Watch Institute purchased a total of 47 cans of solvent-based, enamel decorative paints from various stores in Taipei City, Taiwan. The paints represented 8 different brands produced by seven manufacturers. Samples from these paints were analyzed by an accredited laboratory in the United States of America (USA) for total lead content.

Key findings from the report, Lead in Solvent-Based Paints for Home Use in Taiwan, include:

The paint industry in Taiwan has been growing steadily since the 1950s. According to a report released by the China Credit Information Service Company in March 2015, Yung Chi Paint & Varnish Manufacturing Company has the largest market share among all domestic paint companies. Two Rainbow paints, manufactured by Yung Chi had extremely high lead content.

A previous paint study conducted in Taiwan in 2009 reported results similar to the findings released today.

Founded in 1999, Taiwan Watch Institute (TWI) is an environmental protection group that focuses mainly on brown issues such as waste management, overproduction and overuse of plastics, and recycling mechanisms. TWI is campaigning against waste incineration, plastic microbeads and polyvinyl chloride (PVC) plastic. It monitors and analyzes public policies and lobbies the legislative Yuan (Parliament) with the aim of protecting the environment and achieving sustainability. TWI collaborates with environmental organizations in Taiwan and overseas to promote common issues and concerns.

IPEN is an international NGO network comprised of 700 organizations in 116 countries that work to reduce and eliminate hazardous, toxic substances internationally and within their own countries. (www.ipen.org)