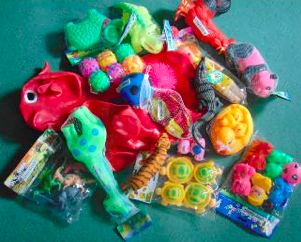 (Gotebörg, Sweden) High levels of toxic substances have been found in over 60% of children’s toys tested in a recent analysis of toxic heavy metals and chemicals in toys on the market in Nepal. The study, released on the anniversary of the passage of Nepal’s 2017 regulatory standard on toxic substances in children’s products, a law that industry lobbyists are currently working to weaken, underscores the need for greater enforcement of the strong regulation. The study was conducted by CEPHED, a Nepalese public interest NGO, and IPEN, a global network of public interest health and environment NGOs.

The analysis found high levels of dangerous contaminants in 62% of 52 toys sampled, including heavy metals such as lead, cadmium, chromium, barium, zinc and bromine, as well as several phthalates in all toys in a small discrete sample. All toy samples were purchased in Nepal, and they were manufactured in China, India and Thailand. These toxic metals and chemical contaminants are known to damage the nervous system and reproductive system, cause lung and kidney diseases, affect the immune system and reduce intellectual capacity, and have been associated with permanent brain damage and cancer. Young children are likely to put toys in their mouths and thus ingest chemicals during a period of rapid neurological development, making children under 5 especially vulnerable to the impacts of toxic exposures. No toy studied contained warning labels to alert consumers of the presence of toxic substances in the toy.

Researchers found that 71% of samples contained at least one toxic metal and 62% contained toxic chemicals above the Nepalese legal standard. Only 38% of toys had a toxic chemical level below the national standard, in compliance with the law. Lead was found in 19% of the samples that were contaminated with at least one toxic metal, cadmium in 8%, chromium in 11%, zinc in 68%, barium in 14% and bromine in 16%.

All toy samples analyzed for the presence of phthalates contained several phthalates banned in many countries, including the US and EU, in concentrations thousands and hundreds-fold higher than the 0.01% limit set in the national standard in Nepal and the 0.1% limit in the US Consumer Product Safety Improvement Act. The researchers say the shockingly high levels of phthalates in 100% of the small sample of soft plastic children's toys indicates the need for the government to step up enforcement and to conduct monitoring studies to ensure that toy manufacturers and retailers are in compliance with the law.

The study was published on the first anniversary of Nepal’s 2017 mandatory Toy Standard, which set legal limits for 12 toxic substances in children’s toys, including heavy metals, bisphenol A (BPA) and phthalates.

In response to the passage of Nepal’s 2017 Toy Standard regulations last July, private sector lobbyists have been petitioning the Nepalese government to remove BPA and phthalates from the new law. These two classes of endocrine disrupting chemicals are associated with a host of illnesses, including cardiovascular disease, obesity, and infertility, and are linked to cancer.

In addition, the private sector is urging the government to change how it determines heavy metal levels in products. Chemical experts say that the regulatory method that measures total concentration limit of chemicals is rapid, easy, and less costly for developing countries. It is clear and unambiguous for both the private sector and consumers. However, the “extractable elements” approach, a change industry is advocating, is cumbersome and expensive, and relies on assumptions that do not prevent exposure, particularly in children. Children can be exposed to toxic metals from dust on the surface of products, or by chewing and sucking directly on them. This is a dangerous move, say chemical experts, that will complicate monitoring and enforcement of the Toy Standard. The assumption of the method, based on the “extractable elements” approach, is that exposure only occurs if a child swallows a portion of the product.

Addressing the current industry lobbying efforts to weaken the standards, Ram Charitra Sah, Executive Director and environmental scientist at CEPHED, commented, “The government of Nepal should not put industry interests over the interests of children and public health. Backtracking on the law to allow dangerous chemicals in toys would be a violation the fundamental right of children to health that is ensured by the Constitution of Nepal and the Convention on the Rights of the Child (CRC), to which Nepal has been a Party for over 25 years.”

“This study affirms that what is needed is enforcement of the new Toy Standard, not weakening of the law,” said Dr. Olga Speranskaya, IPEN Senior Advisor, referring to industry efforts to exclude BPA and phthalates, two classes of endocrine disrupting chemicals that are used to soften plastics and are often used in children’s toys. “The shockingly high levels of phthalates discovered in all samples tested indicate that there are toxic products sold as toys on the market that pose a serious threat to children’s health. Industry should be eliminating endocrine disruptors from toys to keep children safe from these harmful chemicals, rather than scheming about how to undermine important protections for children’s health.”

Chemical experts encourage Nepal to require full disclosure of information on chemicals contained in toys and other children’s products through labelling. “The lack of labelling undermines the right of consumers to know about product chemical safety,” said Ram Charitra Sah.

“Disclosing information on chemicals in products will prove Nepal’s compliance with the recommendations of the UN Environment’s Chemicals in Products Program, which was adopted by more than 100 governments, including the government of Nepal in 2015,” added Dr. Speranskaya.

IPEN is a global network of more than 500 health and environmental public interest organizations in over 100 countries, working to eliminate the world’s most harmful chemicals for a toxic-free future for all.

CEPHED is a Nepalese NGO working on raising public awareness and capacity on environmental and health issues.