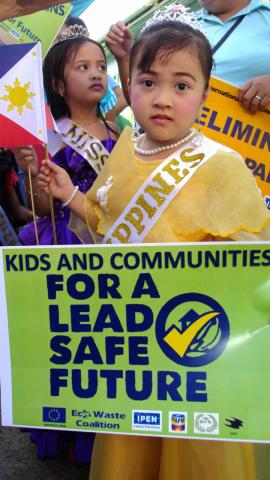 (Nairobi, Kenya) Worldwide, the annual costs of lead exposure are $977 billion international dollars, with developing countries bearing the great majority of costs, according to research and a new interactive map released today that shows country-by-country costs. Overall, the costs of lead exposure are 7 times the amount of funding provided to developing countries in development aid in 2014.[i]

Economic Costs of Childhood Lead Exposure in Low-and Middle-Income Countries was developed by New York University School of Medicine, Department of Pediatrics (NYU) and released today at the 2nd United Nations Environment Assembly meeting held in Nairobi, Kenya. The website can be accessed at: http://nyulmc.org/pediatricleadexposure. The map was created to help governments see the costs of lead exposure in their own countries; compare those costs with other countries; and compare costs with the amount of development assistance their country receives.

The website provides country-by-country data. Annual costs of lead exposure by region include:

According to the World Health Organization, "There is no known safe blood lead concentration.”[ii] When a young child is exposed to lead, the harm to her or his nervous system makes it more likely that the child will have difficulties in school and engage in impulsive and violent behavior. Lead exposure in young children is also linked to increased rates of hyperactivity, inattentiveness, failure to graduate from high school, conduct disorder, juvenile delinquency, drug use, and incarceration.

According to the NYU researchers: “One of the most important things we can do to decrease children's exposure to lead in LMICs (low- and middle-income countries) is to ensure lead is no longer used in household paint and other paints to which children may be exposed (such as paints on playground equipment).”[iii]

To prepare the interactive map, researchers assessed the neurodevelopmental impacts of lead, assessed as decrements (or reductions) in intelligence quotient (IQ) points caused by lead and how those reductions translated into decreases in lifetime earning potential, assessed as lost lifetime economic productivity (LEP) in each country examined.

IPEN is a network of non-governmental organizations working in more than 100 countries to reduce and eliminate the harm to human health and the environment from toxic chemicals and heavy metals. IPEN is a member of the Advisory Group of the Global Alliance to Eliminate Lead Paint (GAELP), which seeks the elimination of lead in paint by 2020.