Quezon City, Philippines As the authorities grapple with the repacking of over 5,000 tons of illegal waste cargoes stranded in Misamis Oriental for re-export to South Korea, environmental health and justice groups vow to keep up the pressure to prevent the recurrence of foreign waste dumping via the country’s seaports.

Emboldened by the impending entry into force of the Basel Ban Amendment on December 5, 2019, the EcoWaste Coalition and Greenpeace Southeast Asia-Philippines jointly urged the government to adopt two critical policy measures that will ensure the protection of the country’s people and the environment against the adverse impacts of foreign waste importation often in the guise of recycling.

The Basel Ban Amendment, adopted on September 22, 1995, will soon become an international law after Croatia’s ratification on September 6, 2019. It prohibits the export of hazardous wastes for all reasons, including recycling, from rich countries belonging to the Organization of Economic Cooperation and Development (OECD), European Union (EU) and Liechtenstein to developing countries. The Philippines has yet to ratify the said amendment to the Basel Convention.

"The advantage of ratifying the Basel Ban Amendment is that it prohibits hazardous waste imports outright if a country has ratified it," said Greenpeace campaigner Abigail Aguilar. "However, despite its imminent entry into force, the Philippines is still not exempted from receiving toxic waste from developed countries at it has not yet submitted its own instrument of ratification. We may, in fact, be at greater risk of being the world's dumping ground and destination of choice without this treaty to protect us. The Philippine government should therefore expedite the ratification of the Basel Ban Amendment. There should be no cause for delay."

“As the Basel Ban Amendment is limited only to hazardous waste shipments coming from rich countries, we deem it essential for the Philippines to impose a national ban on waste importation that will cover all wastes, including household and plastic wastes, from all countries,” said Aileen Lucero, National Coordinator, EcoWaste Coalition.

“Ratifying the Basel Ban Amendment and further prohibiting the export of all wastes to the Philippines will be our best legal protection against waste trafficking that has outraged the whole nation with the seizure of thousands of tons of illegal waste consignments from Canada, Hong Kong and South Korea,” she added.

As President Rodrigo Duterte has verbally ordered the ban on foreign waste imports last May 6, both the EcoWaste Coalition and Greenpeace see no justification for further delaying the country’s ratification of the 24-year old Basel Ban Amendment.

The groups also noted that a cost-benefit study commissioned by the Department of Environment and Natural Resources (DENR) has concluded that the Philippines has the capacity to ratify the Basel Ban Amendment based on net positive assessment.

According to international law experts, parties that are waste exporters can keep exporting if they do not ratify the Basel Ban Amendment --- but only to countries that have not ratified the amendment.

With the entry into force of the Basel Ban Amendment, Canada now cannot ship hazardous waste to China, Indonesia or Malaysia because they have ratified the amendment.

However, Canada can export hazardous waste to the Philippines, subject to prior informed consent, because neither country has ratified the amendment. Under Article 4.1 (c) of the Basel Convention, Canada cannot export to parties that do not consent.

“Together with our allies in the government, the environmental health and justice movement and the broader civil society, we vow to remain vigilant against global waste trade,” the groups asserted. 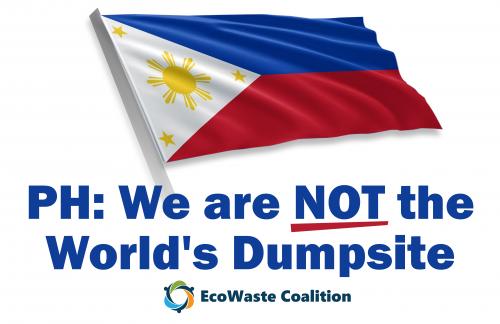