Removing the threat of EPPPs for Egyptian Vultures 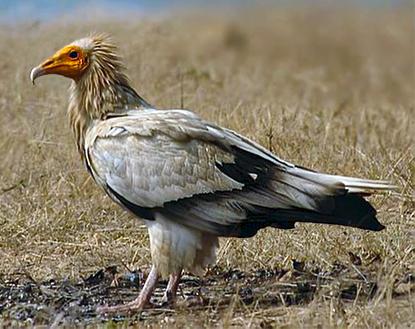 “Until a few years ago, Egyptian Vultures were sighted all over Tamil Nadu. Now, their population is in single digits,” says an alarmed S Bharathidasan. “We need special focus and concerted efforts to revive this species for which we first need to understand the factors responsible for its decline. Egyptian Vultures are different from other vultures,” he mentions.

At a recently concluded meeting of the Vulture Conservation Working Group - South India at Salim Ali Centre for Ornithology and Natural History at Anaikatti, near Coimbatore, the importance of establishing Vulture Safe Zones (VSZs) in Tamil Nadu was discussed. The concept of Vulture Safe Zones (VSZs) were developed in South Asia as an in-situ approach to remove the threat to Vultures from diclofenac, and other toxic NSAIDs used in veterinary practice and to ensure free from carcass poison. The VSZ, usually set up in a 100km radius, focusses on engaging local authorities and communities. They are motivated to ensure a safe zone for vulture by removing threats to its survival.

There are many reasons cited for the decline in Egyptian Vulture population, says Bharathidasan. “Besides carcass, this species also feeds on worms in cow dung, and other insects and bugs. The use of de-worming drugs in cattle and pesticide-laden insects could have also wreaked havoc on the diet of Egyptian vultures. He points out that vultures often congregate around tanneries looking for food. The use of chemicals laden with chromium, sodium and ammonium in tanneries might have also affected the population.”

In Tamil, the Egyptian vulture is referred to as Kodangi Kazhughu or Thotti Kazhugan. A town near Chengalpattu is named after this bird as Thirukazhukundrum or Thirukazhugu kundrum. “There are several authentic records that cite the flocking of Egyptian vultures to this hill temple for feeding and breeding. In the 1960s, Dr Salim Ali recorded two Egyptian Vultures feeding on the food placed by the temple priest at the hill temple. Author K Ratnam in his book Birds of Tamil Nadu, has also recorded the same,”explains Bharathidasan.

Bharathidasan recalls with elation his sighting of the bird at Thiruppuvanum near Madurai in 1994. “That was the last time I saw the bird in Tamil Nadu. Recently, I saw one at Ram Devarbetta Vulture Sanctuary in Karnataka. And, another one at a dump yard in Mysore. Maybe the availability of food, discarded silk worms in these places help them to survive in these places .”

He says that birders have recently recorded juveniles in some parts of Tamil Nadu. “Ganesan, Retired Field Director of Anaimalai Tiger Reserve, has confirmed the nesting of Egyptian Vulture near Hosur. A birder, Om Prakash, has spotted a juvenile in Sathyamangalam. Thirunaranan of Chennai has recorded it from Tuticorin and Ganeswar has recorded it in Salem. Simultaneously, there are other sightings also reported in, Kancheepuram and Tirunelveli, indicating good signs of revival in its population.”

Bharathidasan adds that renowned author Mr KK Neelakantan, in his book Keralathinde Pakshikal (Birds of Kerala), has written that the number of Egyptian vultures exceeded that of crows in Chennai in the 1950s! “Where and why have they disappeared ? It is a wake-up call to examine and take up the conservation of some of our common birds too.”