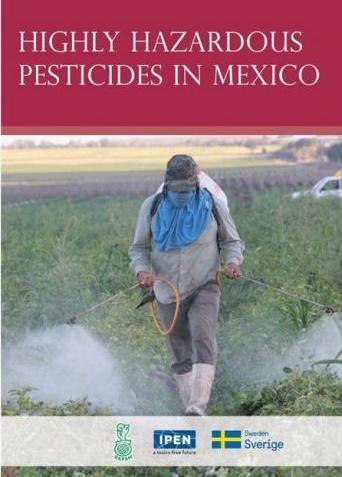 The report "Highly Hazardous Pesticides in Mexico," coordinated by The Pesticide Action Network in Mexico (RAPAM) is now available. In the foreword to the English edition, Hilal Elver, United Nations Special Rapporteur on the right to food, and Baskut Tuncak, United Nations Special Rapporteur on hazardous substances and wastes, say: "This book provides an excellent overview about the peril of the wide use of highly hazardous pesticides in Mexico, many banned in other countries.

They add: “It highlights the need for changes in the regulatory framework and the promotion of emerging agroecological alternatives from peasant communities, including organic farming. It is a very good source to convince other developing countries to phase out dangerous agro-chemicals, achieve healthy food and healthy environments, all the while protecting human rights in agrarian communities and the right to adequate food for all people."

The report highlights the fact that in Mexico, there are 140 active ingredients of pesticides that are authorized by the Federal Commission for the Protection of Health Risks (COFEPRIS) in thousands of commercial products that are banned in other countries, such as the insecticides parathion-methyl, carbofuran, and methamidophos. In addition, 183 active ingredients classified as dangerous by various international organizations in the Pesticide Action Network Highly Hazardous Pesticide (HHP) List for their short and long-term effects are authorized, including 43 pesticides that are probable causes of cancer in humans, such as herbicide glyphosate; and 35 hormonal disruptors such as insecticide chlorpyrifos-ethyl, authorized for agricultural, domestic, urban and livestock use. The use of these pesticides benefits transnational and national companies.

"A profound change in the neoliberal regulatory policy followed by governments in the last decades by health, environment and agriculture authorities in our country is necessary," said Fernando Bejarano, Director of RAPAM and coordinator of the report. He also pointed out, "it is necessary to put at the center of the policy on pesticides and pest control the human dignity of exposed workers, as well as communities and consumers, rather than the protection of the profits and merchandise of powerful companies."

The RAPAM specialist added, "it is necessary to develop a national program of prohibition and increasing reduction of highly hazardous pesticides and the promotion of agro-ecological alternatives, especially in crops where they are already tested, and are near vulnerable populations and sensitive ecosystems." Finally, he stressed, "The report details some short and long-term recommendations that authorities of the future government should consider, taking into account the evidence of the damages already caused and applying the precautionary principle in cases of controversy."

The English edition includes an extensive chapter that analyzes how this new normative category of highly hazardous pesticides emerges in the international arena and their situation in Mexico, written by Fernando Bejarano, Director of RAPAM.

It also contains a chapter on human rights and pesticides, written by lawyers Victoria Beltrán, consultant, and Maria Colin from Greenpeace Mexico. "In our country, there is a terrible management of these substances. Among the main problems are the absence of a definition of Highly Hazardous Pesticides, and policies that acknowledge the severe damages these pesticides cause; they must be withdrawn from the market.” stated Maria Colin, legal campaigner of Greenpeace Mexico. She said, “The excessive use, deficiencies in labeling, bad business practices, excessive confidentiality, lack of transparency, poor generation of data and statistics on the matter, lack of monitoring and surveillance, together with a perverse system of subsidies that support their continued use by farmers, constitute an attack on the human rights of the Mexican population. Because of these reasons, a new legal framework is urgently needed that has as its pillars the precautionary principle, as well as ‘the polluter pays’ and the substitution principle.”

"The economic, social, cultural and environmental rights, with its strong component of commitment and solidarity with humanity, tell us that all people are worthy of dignified living conditions, and thus, give legitimacy to the efforts that we undertake so as not to live in misery, in ignorance, or in unhealthy or contaminated environments,” said Victoria Beltran, lawyer and consultant. She added: “We believe that we should continue with the reflection on the topic of human rights and pesticides; with the understanding that states as guarantors have the duty to monitor the performance of state agents and also to make companies adjust their activities to a rights framework ."

The English edition also includes the translation of a chapter on insecticides and bees, written by a specialist, Remy Vandame, PhD in Ecology, from the Colegio de la Frontera Sur, Chiapas. In Mexico, there have been 82 authorized active ingredients of insecticides present in hundreds of commercial products that can cause the death of bees, including the neonicotinoid insecticides outdoor banned in Europe, such as imidacloprid, thiamethoxam, and clothianidin.

The English edition, with the prologue of the United Nations rapporteurs, as well as the complete edition in Spanish, can be downloaded free of charge

Download the Spanish version of this press release here.

The English edition was made possible thanks to IPEN and the Sweden Government, although the responsibility for the content is only of the authors.

RAPAM is a non-profit civil association that works to progressively eliminate chemical pesticides that affect human health and the environment. It promotes changes in public policies to promote agroecological control of pests, and the protection of the rights to healthy food, free of pesticides and transgenic, and a pollution-free environment.

IPEN is a global network of more than 500 health and environmental public interest organizations in over 100 countries, working to eliminate the world's most harmful chemicals through social movement and public policy action. The mission of IPEN is a toxic-free future for all. ipen.org