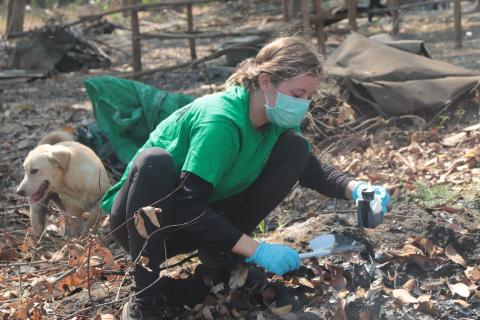 BANGKOK/PRAGUE – Recently published analysis confirmed that communities in the Chachoengsao province face severe food chain contamination with some of the world's most toxic chemicals caused by improper electronic waste processing. Samples of analyzed soil, sediments, and duck eggs, common food rich in nutrients, contained record levels of persistent organic pollutants (POPs) [1]. The dioxin level in duck eggs from a village near an e-waste recycling factory in Moo 9, Khao Hin Son is the 10th highest ever measured level in poultry eggs in Asia, and the 2nd highest level measured in eggs from Thailand.

The highest levels were observed in Nong Khok village, where contamination of the food chain, most likely caused by dismantling and incineration of e-waste, was confirmed by high levels of some POPs in free-range duck eggs. “The massive import of electronic waste together with its domestic production, constitute a serious source of pollution in Thailand. This is exacerbated by systemic problems in Thailand’s waste management system, such as poor regulation of transportation, leading to illegal dumping, and recycling factories that do not take environmental protection measures. This has led to ‘leakage’ of toxic waste into the environment, leaving toxic and long-term contaminants like POPs in the local environment, the local food chain, and perhaps eventually, the locals themselves,” stresses Penchom Saetang from EARTH Thailand.

Citizens in both sites of the project have complained of foul smell from e-waste recycling factories in the area. Both factories named in this report conduct burning and melting of metals from e-waste. In Thailand, there are many recycling operations, factories or workshops that burn residual wastes, including plastic, in processes that are lumped under the large category of “recycling”.

As Penchom has stated, poor regulations and unsystematic waste management are the key that unlock these potential pollutants to the environment. Another source of serious contamination nearby the examined localities are industrial sludges illegally dumped without proper environmental measures. In such sites, located in Nong Khok and Hat Nang Kaeo, high levels of short-chain chlorinated paraffins (SCCPs) [3] were found.

“Our research shows that pollution around the e-waste processing facilities is alarming. The results exceeded EU limits and were much higher than the reference samples from an organic farm in Thailand. The so-called recycling of e-waste is connected to many health, and environmental risks which cannot be that cannot be traded off for any potential economic benefits. The Thai government should ratify the Basel Convention Amendment  to quit some of the most harmful practices in waste management. Adoption of PRTR law proposed by the citizens‘ initiative could make releases of toxic chemicals more transparent if dioxin and other POPs will be reported,“ concludes Jindrich Petrlik from Arnika, Czech NGO, one of the study’s authors.

“Public participation through citizen science and EIA system enhancement” projects funded by the European Union (EU) and co-funded by the Ministry of Foreign Affairs of the Czech Republic within the Transition Promotion Program.

[1] Persistent Organic Pollutants (POP) represent a large group of chemicals that persist for a long time in the environment and bioaccumulate, mostly having the potential for long-range environmental transport. They also have adverse effects on human health or the environment. These man-made substances are banned under the Stockholm Convention and include PCBs, dioxins, brominated flame retardants, and PFAS.

[2] Polybrominated dibenzo-p-dioxins and dibenzofurans (PBDD/Fs) are the most relevant group of unintentionally produced POPs in the sampled sites with e-waste and/or plastic waste which may contain brominated flame retardants.

[3] Short-chain chlorinated paraffins (SCCPs) are additives in plastics that might also be expected in waste imported and/or produced in Thailand. They were often used to manufacture wires and cables. They are toxic to aquatic organisms at low levels, disrupt endocrine function, and are suspected of causing cancer in humans.