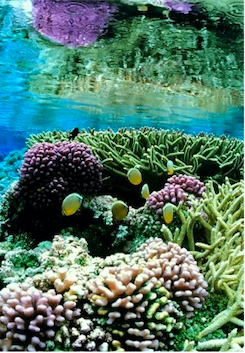 An article published in Science finds that the ocean is warming more quickly than previously estimated. The authors, from the Chinese Academy of Sciences, University of St. Thomas, UC Berkeley and the National Center for Atmospheric Research, model increasing ocean heat content (OHC), which is projected to accelerate. They explain that OHC captures approximately 93% of energy imbalances in the climate system, and these imbalances are attributed to human activities such as the burning of fossil fuels. The article underscores a “clear need” to improve ocean observation systems and work to slow the rate of climate change. Write-ups on Thomson Reuters and the New York Times are also available.

Erna Solberg, Prime Minister of Norway, writes in a post on the World Economic Forum (WEF) blog that “the ocean holds the key to sustainable development.” Noting that the ocean’s sustainable use has historically enabled Norway’s prosperity, Solberg outlines elements of her government’s ocean strategy. On the private sector perspective, she notes that “following green policies does not lead companies into red figures.” Key issues to address, she highlights, include climate change, marine litter and pollution, illegal, unreported and unregulated (IUU) fishing, and the loss of habitats and biodiversity. The WEF Annual Meeting is taking place from 22-25 January 2019, in Davos, Switzerland. Further coverage will be available on the SDG Knowledge Hub in the coming weeks.

Solberg also recently signed a memorandum of understanding with the Government of India to conduct an “India-Norway Ocean Dialogue,” enhance bilateral relations and work towards the SDGs. The translation of Indian Prime Minister Narenda Modi’s press statement on the subject is here, and a joint statement released by the Royal Norwegian Embassy in New Delhi is available here.

On multilateral means of addressing ocean challenges, a guest article on the SDG Knowledge Hub by Peter Thomson, Special Envoy of the UN Secretary-General for the Ocean, urges the World Trade Organization (WTO) to hold a special high-level session in 2019 towards the elimination of harmful fisheries subsidies. Noting that four of SDG 14’s ten targets are due for delivery in 2020, Thomson argues that this year is critical to ensuring the health and well-being of the ocean. He explains that the wording of SDG target 14.6, on prohibiting certain forms of fisheries subsidies, defers to ongoing negotiations in the WTO, and outlines several reasons for the removal of the subsidies in question.

An op-ed on Devex calls attention to invisible ocean pollutants, which the authors note as having contaminated even the deepest, most remote parts of the ocean. Written by staff from the National Toxics Network and IPEN (also known as the International Persistent Organic Pollution (POPs) Elimination Network), the article notes that up to 20 billion tons of waste, including a range of chemicals, are directly deposited into the ocean each year. The article also references IPEN’s Ocean Pollutants Guide released in October 2018. The guide serves as “an educational tool of” the IPEN Toxics-Free SDGs Campaign. It introduces and identifies: specific ocean pollutants; their impacts on ecosystems, marine life and the human food supply chain; and opportunities and challenges for addressing the issue, including through international frameworks and mechanisms such as the SDGs, the UN High-level Political Forum on Sustainable Development (HLPF) and UN Environment Assembly (UNEA), among others.

The World Ocean Initiative (WOI) of The Economist Group (publisher of The Economist) released a white paper examining ocean sustainability in the Indian Ocean Rim. The report highlights key ocean challenges for countries in the region, and explores how developing countries can tackle them even within a context of low incomes and environmental regulatory frameworks that have “yet to mature.” The report’s chapters delve into five main challenges: marine ecosystem degradation; plastics pollution; unsustainable fishing; extraction of non-renewable marine resources; and rising water salinity, particularly from desalination activities. The findings are supported by case studies from Indian Ocean Rim countries and regions, including Australia, India, Indonesia, Kenya, Seychelles, Somalia, Somaliland, Sri Lanka, Thailand, the United Arab Emirates and Zanzibar. Looking ahead, the sixth World Ocean Summit is being held from 5-7 March 2019, in Abu Dhabi, UAE on the theme, ‘building bridges.’ The meeting is organized by the WOI and hosted by the Government of UAE.

A discussion on ocean warming and thermal expansion would be incomplete without acknowledging one of the key drivers, as noted in the Science article on ocean heat content: rising greenhouse gas (GHG) emissions from human activities. A paper published in Energy discusses the role in heating and cooling in countries’ energy consumption and their decarbonization targets. With a focus on Switzerland, the authors assess heating supply and demand to determine the extent to which district heating networks (DHNs) and heat pumps can decarbonize the country’s heating system. Heating and cooling, the authors note, contributed to roughly half of EU countries’ final energy consumption in 2016. The paper’s abstract calls attention to Switzerland’s nationally determined contribution (NDC) under the Paris Agreement on climate change, outlining the emissions reductions necessary to achieving the country’s targets. NDC achievement, it underscores, necessitates tripling or quadrupling the number of DHNs in order to integrate existing ambient heat, thereby contributing to the decarbonizing of the Swiss system.

However, DHNs and other opportunities are not readily available in all sectors. Released in November 2018, a report by the Energy Transitions Commission (ETC) looks at “harder-to-abate sectors” such as heavy industry and heavy-duty transport, including cement, steel, plastics, trucking and aviation, which represent approximately a third of energy emissions today, an ETC press release notes. Despite the challenges, the full report, titled ‘Mission Possible,’ describes decarbonizing these sectors as “technically and economically feasible” and charts a path through robust policymaking, investment, technological innovations and consumption decisions. A summary of the report’s key messages is also available.

On the legal side, the Environmental Law Institute (ELI) released a book titled, ‘Legal Pathways to Deep Decarbonization in the United States: Summary & Key Recommendations.’ The volume distills information and recommendations from a lengthier, 35-chapter publication by the same title, which identifies over 1,000 legal options at federal, state and local level for enabling and accelerating decarbonization in the US. The full publication’s landing page notes that recommendations are presented regardless of current political feasibility. The recommendations range from cross-cutting approaches such as carbon pricing to sector-specific tactics, including those covered by the ‘Mission Possible’ report and Energy paper, such as the heavy-duty transportation industry and heating and cooling systems in buildings.

Returning to oceans, an article on Haaretz notes that “even if we decarbonize now,” the deep Pacific Ocean will continue to warm. The article references the Science study above and highlights differences between the Atlantic and Pacific circulation systems: whereas the deep Atlantic is warming, the depths of the Pacific are still undergoing a cooling trend from the “Little Ice Age” during the last millennium. Thus, the article explains, although the deep Pacific is providing a “brake” on global warming by absorbing today’s heat, it will be released later – even if society decarbonizes today.

While these deep ocean trends are unlikely to affect wildlife or marine biodiversity—on which the UN holds yearly discussions—warming at the surface presents a different picture, with a Guardian article pointing to rapid ocean warming as a having a major impact. Such warming, it emphasizes, caused the world’s largest extinction event ever 252 million years ago, which resulted in the die-off of up to 96% of all marine species and two thirds of terrestrial species.