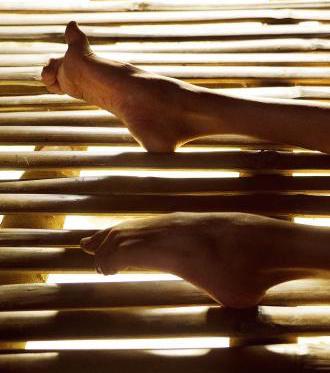 RAU-RAU, Indonesia—Off the main road and down a terraced hillside, there is a small house painted a bright aqua. Behind the tidy house a much smaller bamboo hut sits on a foundation of stacked stones, like a cage on a platform.

Inside the hut it is dark, except for thin bands of light that filter through gaps in the bamboo walls.

A small girl lies on a blanket on the floor. Her mother crouches at her side.

The girl's bone-thin legs convulse, drawing up then stretching out reflexively. Her feet are pointed and trembling. Her arms flail backwards. Her body contorts at odd angles. She moans as she moves.

The girl's name is Dita. This 12-foot-square bamboo hut is her world.

Dita is a victim of the "uncommon diseases," a name locals give to an assortment of neurological and physical abnormalities that afflict people in this part of Sulawesi where small-scale gold mining drives most of the economy and mercury contamination is rampant.

Dita's mother, Kustin, 43, tells the story. Dita was a normal little girl, running, talking, laughing and playing, until she was about 3 years old. Then she began to stumble and have trouble walking. She had seizures. Local doctors couldn't figure out what was wrong with Dita, and, her mother said, offered nothing to help her.

When Dita was 7 years old, her strange symptoms became suddenly much worse. She lost control of her arms and legs. Her limbs contorted and became rigid. Her hands and fingers curled shut. She stopped talking. And still no one, Kustin says, knew what was wrong with her daughter. She is 10 now and never leaves the hut.

And Dita is far from the only one affected this way.

Throughout Sulawesi, where gold is mined and mercury is used in the processing, babies are born with deformities, seemingly normal children stop talking and walking, and adults shake uncontrollably. Health officials have a name for the "uncommon diseases"––mercury intoxication.

The maladies and deformities, including the delayed onset of paralysis and neurological problems in young children, born seemingly normal, are classic symptoms of severe mercury poisoning.

BaliFokus, a nonprofit Indonesian NGO that researches environmental pollution, and the Medicuss Foundation, a group of Indonesian physicians who volunteer field time, conducted preliminary health assessments and environmental testing in three mercury hotspots between February and March 2015, including Rau-Rau in the province of Bombana where Dita lives. In Bombana, readings ranged from low normal to as high as 41,000 nanograms/m3 in one gold shop—more than 40 times the safe level established the World Health Organization and the U.S. Department of Health and Human Services. Readings above 10,000 nanogram/m3 are cause for immediate evacuation.

BaliFokus also found mercury in rice and fish and in water and soil at levels of 600 to 3,000 times higher than World Health Organization safe standards.

The joint report by BaliFokus and Medicuss Foundation recorded "several severe mercury intoxication suspects in adults and children" in the three hotspots surveyed.

Dita was one of the children examined. Her symptoms are classic for congenital Minamata disease, the syndrome named for Japanese city where clusters of children and adults were found suffering from severe deformities and neurological damage caused by chronic mercury poisoning.

On the day BaliFokus tested the air in Dita's bamboo hut, the mercury reading was a normal––below 25 nanograms per cubic meter. But six to seven years ago, Dita's mother and father were actively involved in burning gold amalgam in the backyard of their home, a process that released mercury vapors, according to Yuyun Ismawati, an environmental engineer and director of BaliFokus who supervised the survey.

"During the burning of the amalgam, the Hg vapor around the area could be in the range between 10,000 and up to 45,000 nanograms per cubic meter, Ismawati explained. "If there were two or three people burning, the levels could be doubled or tripled. Considering the bamboo walls, I think the mercury was well circulated inside the house for a number of years."

According to the United Nations Environmental Program, artisanal gold mining (also known as small-scale mining) is the single largest source of mercury emissions globally, releasing approximately 1,000 tons of mercury into the environment. In 2011, a BaliFokus report on mercury monitoring identified about 850 small-scale gold mining hotspots in Indonesia.

Small-scale miners use mercury to separate gold from the ore at different stages of the processing. Miners pan with mercury. And mercury is added to ore, which is tumbled in crude, rock-crushing machines known as ball mills. The mercury binds to the gold to create an amalgam, which is then heated in an open pit or a pan at very high temperatures with an acetylene torch. As it is burned, the mercury vaporizes, leaving behind a pure gold.

At every step of the process, mercury is released into the environment––spilled during panning into rivers and streams, released in clouds of dust from the ball mills, and vaporized into the air during burning.

Throughout Rau-Rau and other small villages nearby, the noise is constant. Backyard small-scale gold processing facilities are everywhere. There is a lot of gold being mined in Sulawesi and many—if not most—rural households augment their income by processing and smelting gold ore.

People live in huts above the grinding ball mills or, as in Dita's case, in homes where the mercury amalgam is burned. Air filled with mercury vapors and dust is the air they breathe.

Mercury spilled into waterways or returned to ground water in rain contaminates rice and fish, and this is the food they eat.

Mercury is a neurotoxin that accumulates in the body and causes serious damage to the brain, nervous system and many other organs, including the kidney, liver and heart. Mercury intoxication also is insidious and often takes years to manifest obvious symptoms, health experts say. Babies affected in utero may be born seemingly normal only to rapidly lose motor function and cognition as toddlers.

And once the symptoms do become apparent, especially in undeveloped areas lacking medical care, it is usually too late. It is also often difficult to directly prove mercury poisoning unless the affected individuals are still living in a contaminated area.

Such is the case with Dita. The burning in her backyard has stopped, and she is no longer breathing mercury vapors. But the damage has been done.

On this particular day, the temperature outside is hot and steamy. Inside the hut, air circulates weakly through holes cut for ventilation.

Kustin takes a wet cloth and gently wipes beads of sweat from her daughter’s forehead. At her mother's touch, Dita arches her tiny body, and Kustin gently rolls the girl on her side. Kustin talks to her daughter constantly, unsure what, if anything, she understands. But the sound of her voice seems to soothe Dita.

The mother has learned to read her child's cues. Back arching and shaking mean pain. The child's pain causes great pain for the mother and for now, there is no slaking it.

"Dita feels a lot of pain and she gets mad," Kustin says. "She's in pain, every day. All the time."

Postscript:
On 31 August, Dita suffered from seizures from early in the morning until 5 pm. Afterwards, we received very sad news from the BaliFokus field team that Dita passed away. She was 10 years old.