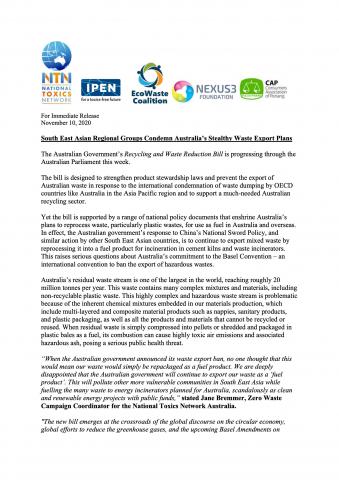 The Australian Government’s Recycling and Waste Reduction Bill is progressing through the Australian Parliament this week.

The bill is designed to strengthen product stewardship laws and prevent the export of Australian waste in response to the international condemnation of waste dumping by OECD countries like Australia in the Asia Pacific region and to support a much-needed Australian recycling sector.

Yet the bill is supported by a range of national policy documents that enshrine Australia’s plans to reprocess waste, particularly plastic wastes, for use as fuel in Australia and overseas. In effect, the Australian government’s response to China’s National Sword Policy, and similar action by other South East Asian countries, is to continue to export mixed waste by reprocessing it into a fuel product for incineration in cement kilns and waste incinerators. This raises serious questions about Australia’s commitment to the Basel Convention – an international convention to ban the export of hazardous wastes.

Australia’s residual waste stream is one of the largest in the world, reaching roughly 20 million tonnes per year. This waste contains many complex mixtures and materials, including non-recyclable plastic waste. This highly complex and hazardous waste stream is problematic because of the inherent chemical mixtures embedded in our materials production, which include multi-layered and composite material products such as nappies, sanitary products, and plastic packaging, as well as all the products and materials that cannot be recycled or reused. When residual waste is simply compressed into pellets or shredded and packaged in plastic bales as a fuel, its combustion can cause highly toxic air emissions and associated hazardous ash, posing a serious public health threat.

“When the Australian government announced its waste export ban, no one thought that this would mean our waste would simply be repackaged as a fuel product. We are deeply disappointed that the Australian government will continue to export our waste as a ‘fuel product’. This will pollute other more vulnerable communities in South East Asia while fuelling the many waste to energy incinerators planned for Australia, scandalously as clean and renewable energy projects with public funds,” stated Jane Bremmer, Zero Waste Campaign Coordinator for the National Toxics Network Australia.

"The new bill emerges at the crossroads of the global discourse on the circular economy, global efforts to reduce the greenhouse gases, and the upcoming Basel Amendments on plastic wastes. The bill could become a barrier for Australia to achieve all targets related to the global commitments," said Yuyun Ismawati from Nexus3 Foundation, Indonesia.

"In the last couple of years, a significant percentage of mixed waste from Australia that entered Indonesia, could not be recycled. Instead Australia should redesign the packaging, improve waste separation and collection, and recycling for new products should be improved to meet the circular economy goal. Converting waste into RDF is not compatible with the circular economy principles and still pollutes the neighbouring countries," added Yuyun Ismawati.

“In the past, like Indonesia, Malaysia has had bad experience from the exports of Australian waste to our country in the pretext of recycling and for use as fuel in cement kilns. Some of these wastes that were processed and repackaged as "fuel" such as Processed Engineered Fuels (PEFs) were found to be contaminated with hazardous waste,” stated Mageswari Sangaralingam from the Consumers’ Association Penang (CAP), Malaysia.

“Why should we, the recipient communities in the developing country, suffer the adverse impacts from dumping of residual wastes, and toxics from the combustion of these wastes that are disguised as "fuels"? Australia should stop the exports and dumping. Take responsibility for your own waste. Do not export harm,” Mageswari Sangaralingam added.

Aileen Lucero from EcoWaste Coalition, Philippines stated, "Allowing plastic wastes to be exported for co-incineration in cement kilns in developing countries is garbage disposal by another name. This is a deceptive scheme for Australia to get rid of its plastic residuals, combined with other materials, in the guise of replacing fossil fuels in cement production, as if these wastes are not petroleum-based to begin with. We reject this gaping loophole in Australia's plastic export ban and ask the federal government to reconsider this scheme rebranding their garbage as fuel.”

See the press release for information and interview contacts.