Stories from the Clean Room 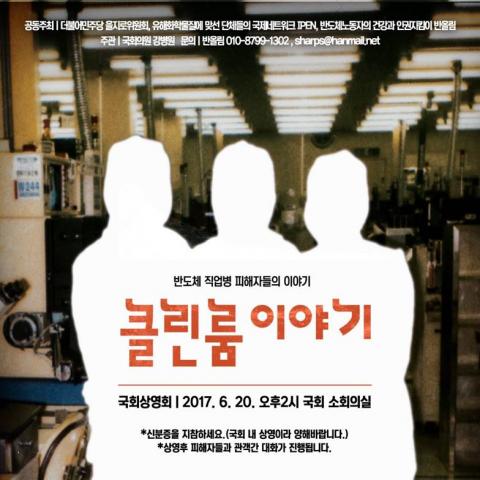 For information about global screenings of Stories from the Clean Room and to watch the trailer, click here.

The National Assembly in Seoul, South Korea has paid meaningful attention to the hazardous conditions in the semi-conductor industry by hosting Supporters of Health and Rights of People in the Semi-Conductor Industry (SHARPs) and IPEN for a premiere of the new documentary film, "Stories from the Clean Room.” In preparation for the film premiere, IPEN Senior Science and Technical Advisor Joseph DiGangi, PhD wrote an article that appeared in the Korean media outlets OhMyNews and MediaToday. The main purpose of the article was to introduce the international concern about toxic exposure and occupational health and safety that has been generated by the deaths and grave illnesses of former Samsung workers.

Many workers have been seriously injured or killed working in electronics production around the world but the victims are largely invisible to the global users of computers, mobile phones, TVs, and other electronic products. That is why IPEN decided to collaborate with SHARPS and put a human face on this public health crisis in “Stories from the Clean Room.” The film provides vivid testimony from 21 former workers, spouses and parental survivors. Han Hye-kyung, who appears in the film, is dedicated to preventing future harm from toxic chemicals used in electronics; “They did not protect me and we should never let them do it again…I really hope not to see victims like myself anymore.”

After the film showing, media outlet Hanyoreh reported: “Lee Hak-young, chairman of the Democratic Party Euljiro, said, "The democratic party and the Euljiro committee will be with you, recognizing that human life is more important than corporate profit.”

See a leaflet for the film premiere here

People who appear in the film (in alphabetical order):