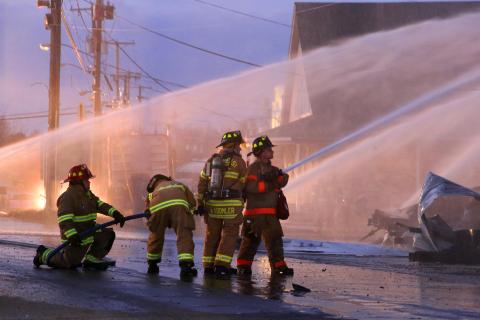 PFHXs, Used as a Substitute for Banned PFOS and PFOA, Recommended for Global Ban
04 October 2019

Rome, Italy An U.N. expert committee decided unanimously to recommend a complete global elimination for another toxic fluorinated “forever chemical.” Fluorinated chemicals are widespread pollutants threatening drinking water sources, public health and the occupational health of firefighters. They do not break down in the environment and accumulate in the bodies of wildlife and people. They are used in a wide variety of products, including firefighting foam, waterproofing of textiles, and food packaging, as well as other industrial and consumer applications.

The Committee recommended the global elimination of PFHxS and 147 related substances. PFHxS is a toxic chemical that was used by the fluorine industry as a replacement for two other fluorinated compounds, perfluorooctane sulfonate (PFOS) and perfluorooctanoic acid (PFOA). Fluorinated substances, also known as PFAS (per- and polyfluoroalkyl substances), are at the center of a current wave of lawsuits since they have been found in high levels in ground- and drinking water near industrial facilities, airports and military bases. The Committee warned against repeating the mistake of using other PFAS, by noting that “a transition to the use of short-chain per- and polyfluoroalkyl substances (PFASs) for dispersive applications, such as fire-fighting foams, is not a suitable option from an environmental and human health point of view”. In 2009, PFOS was listed under the Stockholm Convention for global elimination and earlier in 2019, the Conference of the Parties of the Stockholm Convention listed PFOA for global elimination.

“This recommendation will help protect firefighters all around the world from exposure to toxic chemicals that cause cancer. Firefighters have some of the highest rates of cancers and other diseases associated with occupational exposures to toxic chemicals,” said Commander Mick Tisbury, Vice President of the United Firefighters Union of Australia, and Commander of the Melbourne Metropolitan Fire Brigade (MFB).

In September, the U.N. Human Rights Council passed a resolution “highlighting the global crisis confronting workers exposed to toxic substances” and calling upon governments and industry to meet their obligations under international human rights mechanisms to protect the health and safety of workers.

“PFAS contamination of drinking water is threatening the health of people in many of our communities in Alaska and of millions of people around the world. The fluorine industry has denied and deceived the public for decades. It is time that they are held accountable and stop producing these dangerous chemicals,” stated Pamela Miller, IPEN Co-Chair and Executive Director of Alaska Community Action on Toxics.

The Committee also highlighted that this large class of chemicals can be dealt with using a grouping approach, which has been found to be an important method to reduce the likelihood of substituting one toxic chemical with another.

“There is increasing evidence for concern about the whole class of fluorinated chemicals and the industry should stop replacing one bad chemical with another closely related bad chemical. Knowingly pursuing this approach is just cynical self-interest by the industry that damages human health,” said Dr. Sara Brosché, IPEN Science Advisor. “This entire class of fluorinated chemicals is too dangerous to deal with one at a time and countries should take action to address them as a class and remove all of them.”

The U.N. expert committee determined that Dechlorane plus (DP) fulfills the screening criteria of the Stockholm Convention and should be further evaluated for listing under the Convention. This substance is used primarily as a flame retardant chemical in plastics for computers and televisions, coatings for wires and cables, and polyurethane foam. DP is a slight modification of mirex – one of the original dirty dozen substances listed in the Convention that has been found in human milk, serum, and cord blood. DP has also been found in remote regions including biota of the Arctic and Antarctic. Effects of exposure to DP include neurotoxicity, liver impairment and endocrine disruption. DP has been marketed as a replacement chemical for decabromodiphenyl ether (decaBDE), another flame retardant that was listed for global elimination under the Stockholm Convention in 2017.

The Committee also evaluated the pesticide methoxychlor and found that it too meets the screening criteria because it is highly persistent, bioaccumulative, toxic, and is found in remote regions. Methoxychlor was developed as a replacement for DDT and has been widely used in agriculture, for mosquito control, against bark beetle vectors of Dutch elm disease, and in veterinary applications. It is associated with elevated risk of breast cancer in humans, reproductive harm in animal studies, and is toxic to aquatic life.

The week-long meeting of the Stockholm Convention’s expert committee was held from 1-4 October 2019.

The Committee, known as the Persistent Organic Pollutants Review Committee (POPRC) is an expert committee of scientists that reviews chemicals proposed for listing under the Treaty and makes recommendations to the Conference of the Parties. Members of the POPRC are government-designated experts in chemical assessment or management.

IPEN is public interest NGO network working in more than 120 countries to reduce and eliminate hazardous substances. IPEN has been actively involved in the POPRC process for fifteen years.