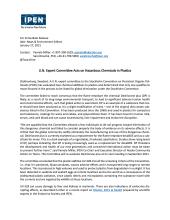 Calls for Identification and monitoring of source sites
Thursday, 14 January 2021

(Prague, Czech Republic) - The large group of perfluorinated chemicals, collectively known as PFAS and often called "Forever Chemicals" because they are not easily broken down, have been found nearly everywhere researchers have looked for them — but particularly in food, water supplies, and soils. Czech Republic NGO Arnika recently studied sources in and around Prague, and found PFAS, its related chemicals, and additionally brominated flame retardants (BFRs) in nearly every sample. The study, Forever Chemicals Round and Round, made clear that identifying and continually monitoring PFAS and BFR sources is vital for community health and environmental sustainability.

Although regulation of these chemicals is increasing, the categories of perfluorinated and brominated chemicals are large. So as one chemical is identified and listed for restriction, another is adopted for use, all without understanding the underlying health effects. Ironically, many of these substances have known, safe alternatives. In response to studies showing PFAS in blood samples of firefighters, airports have been moving to safer fire-fighting foams, replacing fluorinated forms, which constitute roughly one-third of known PFAS contamination and which have been found in water ways near airports, including in Arnika's recent study.

“Perfluorinated substances and brominated flame retardants are not essential for the majority of applications and there are already safer alternatives on the market today. Therefore, their production should stop immediately. We call on both manufacturers and legislators to restrict the use of these toxic substances for all non-essential purposes. The deterioration in the quality of drinking water and the global environmental contamination caused by PFAS are irreversible,” says Jitka Strakova from Arnika.

Less widely reported than the mountains of single-use plastics and unrecycled plastics are the often-harmful chemical additives these plastics contain. Meant to make plastics more pliable or durable, more fire-resistant or antimicrobial, more UV-resistant or simply more colorful, many of these additives have been shown to disturb hormonal systems in humans and animals by leaching into liquids, food, and the environment. In a new report, “Plastics, EDCs & Health: A Guide for Public Interest Organizations and Policymakers on Endocrine Disrupting Chemicals & Plastics,” the Endocrine Society and IPEN detail chemicals, what they are and where they occur, their effects, and exposures to organisms, painting an alarming picture of the harms to which we are all exposed.

(Bali, Indonesia/Bangkok, Thailand/Manila, Philippines) - Experts from various fields and institutions cited the tremendous potentials of citizen science for advancing public participation in research efforts that can generate data, which can increase the negotiation power of communities facing chemical and waste pollution.

At the end last week of the four-part IPEN Southeast and East Asia Virtual Conference, resource persons from Norway, Indonesia and the Philippines and participants from 12 countries discussed perspectives and experiences on citizen science for generating data and for pursuing policies and measures to promote and protect public health and the environment.

Held amid mobility restrictions due to the COVID-19 pandemic, the online conference series was co-organized by the Ecological Alert and Recovery-Thailand, Nexus3 Foundation-Indonesia and EcoWaste Coalition-Philippines with support from the Stockholm Environment Institute (SEI) and IPEN.