IPEN’s Quick Views on the Stockholm Convention’s 6th Conference of the Parties (COP6): This document, available in the six UN languages, contains a summary statement of IPEN views on issues that COP6 will be called upon to address, such as Listing HBCD in Annex A; DDT; Exemptions and their evaluation; and other important topics.

African NGOs and CSOs Statement on the continuous use of DDT for malaria control. This statement was developed in December 2012 at a meeting of NGOs and CSOs in Dar-es-salaam, Tanzania, to bring forth certain issues pertaining to continued use of DDT for malaria control to the attention of the delegates attending the Sixth Meeting of the Conference of the Parties of the Stockholm Convention on POPs and the EXCOP, Geneva, Switzerland, 28 April – 10 May, 2013.

Powerpoint presentations from IPEN’s side event on “Dumping E-waste & Recycling POPs- Are the Conventions Losing Control?” 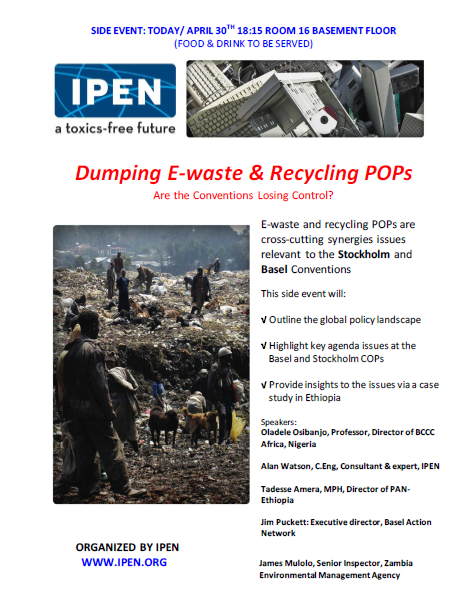 After conducting an e-waste inventory in four cities in Ethiopia, this guide was developed (based on the Ethiopian experience) so that other developing countries facing similar problems can use it and adapt it for their local situation in conducting e-waste inventories, as well as lobby for the formulation of policies to regulate the lifecycle management of e-products in their respective nations. IPEN has updated its guide to toxic flame retardant chemicals to reflect new developments since it was first released in June 2012. The guide is an introduction to the science and industry manipulation of toxic chemicals marketed as flame retardants. These toxic chemicals do not provide fire safety but are widely present in consumer products that release them into dust, polluting people and the environment. They are also present in the millions of tons of electronic waste that is dumped in developing countries each year. The guide can help raise public awareness about this harmful class of substances and stimulate action to reform how chemicals are produced, used, and substituted so that harms from toxic chemical exposure can ultimately be eliminated. English / Spanish