Although IPEN’s main focus in the Ordinary and extraordinary meetings of the conferences of the parties to the Basel, Rotterdam and Stockholm conventions was the work related to the Stockholm Convention, IPEN also participated in the Basel and Rotterdam Convention meetings (11th and 6th Conferences of the Parties, respectively), as did some of IPEN’s partners, such as Pesticide Action Network (PAN), Basel Action Network (BAN) and Rotterdam Convention Alliance (ROCA), amongst others.

Below you can find some documents and other information related to the Basel and Rotterdam Convention meetings.

Developing countries joined forces this week to defeat attempts by electronic equipment manufacturers represented by the Information Technology Industry Council (ITI) and industrialized powers including the European Union, US, Japan and Canada, to create loopholes that would allow repairable electronic waste to be exempt from the international Basel Convention hazardous waste trade control procedures.

“Already, developing countries cannot control the junk electronic computers, faxes, printers and TVs flooding into their countries from North America and Europe, all in the name of ‘helping the poor’ and ‘bridging the digital divide’,” said Jim Puckett, Executive Director of the Basel Action Network. “Industrial countries are treating the rest of the world as a digital dump. It is no wonder developing countries do not appreciate industry proposals to make matters worse.”

4 May, 2013: Center for International Environmental Law (CIEL) intervention on waste produced on board ships, given by David Azoulay

2 May, 2013: Center for International Environmental Law (CIEL) intervention on ship breaking, given by David Azoulay

Basel Action Network, Center for International Environmental Law and the NGO Shipbreaking Platform are hosting a side event in Geneva on 3 May: Ensuring Shipbreaking is in Compliance with the Basel Convention
6:15-7:45 p.m. Room 18 of the CICG Center 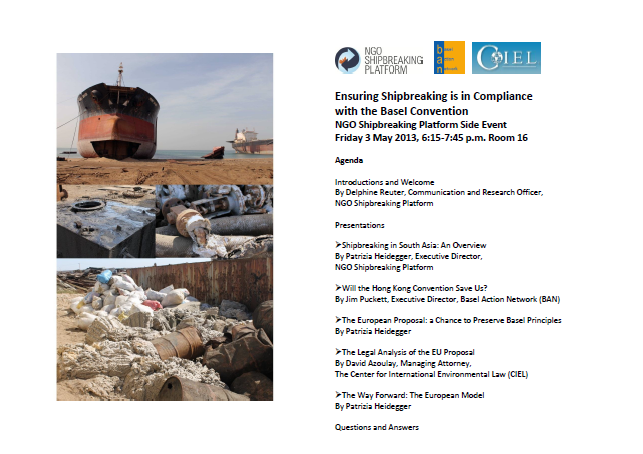 Center for International Environmental Law’s (CIEL’s) detailed legal analysis on waste produced on board ships, prepared for the Basel Convention’s 10th Conference of the Parties.

7 May, 2013: Pesticide Action Network’s statement regarding Paraquat Dichloride 200g/L of paraquat ion for listing in the Convention, given by Chela Vazquez

7 May, 2013: Pesticide Action Network, along with the Berne Declaration, FAO, and SAICM, organized a side event on Highly Hazardous Pesticides. 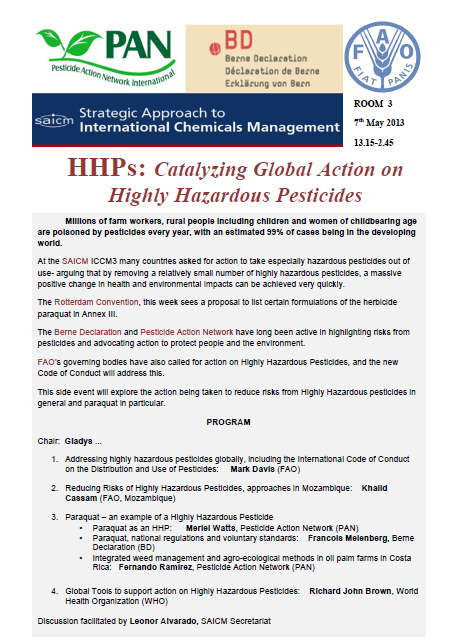 Pesticide Action Network and partners from around the world sent an Open letter to governments requesting to add paraquat dichloride 20% to the Rotterdam Convention. The letter calls on all countries that are Parties to the Rotterdam Convention to agree to the listing of the severely hazardous pesticide formulation paraquat 200 g/L or above to Annex III of the Convention, at the Sixth Meeting of the Conference of the Parties.

Summary of the monograph