"Was the Stockholm Convention established to prevent industry from additional costs or is “the objective of this Convention to protect human health and the environment from persistent organic pollutants”?"

Learn about dioxin, one of the Stockholm Convention's original "dirty dozen," its presence in waste and free-eange eggs, and the effectiveness of its listing in the Convention in this new study from Arnika and IPEN. 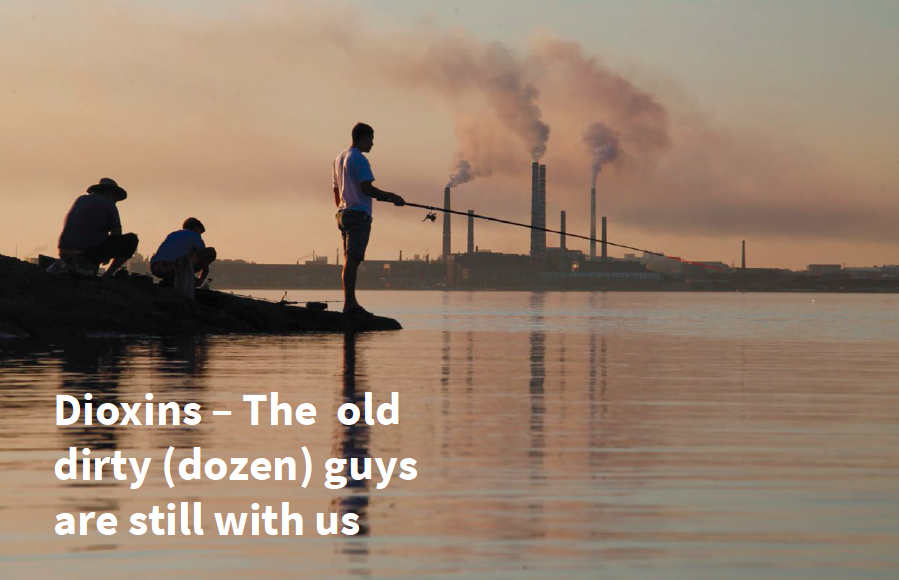 Alarming levels of some of the most toxic chemicals, including brominated dioxins and brominated flame retardants, were found in consumer products made of recycled plastics sold in Argentina, Brazil, Cambodia, Canada, the EU, India, Japan and Nigeria. Dioxins were measured in children’s toys and hair accessories at levels comparable to those found in hazardous wastes, including the ash from waste incinerators.

Brominated dioxins are highly hazardous chemicals that are known to affect brain development, damage the immune system and unborn children, increase the risk of cancer and risk disruption of thyroid function. They are formed unintentionally during production of brominated flame retardants. In addition, when plastics with brominated flame retardants are recycled and heated to re-form new plastic products, additional brominated and chlorinated dioxins are formed.

Dioxin and PBDE levels were found in all of the items sampled, and half of the products exceeded the proposed chlorinated dioxin hazardous waste limit. More than half of the analyzed products made of recycled plastic measured levels of PBDEs that meet current regulatory proposals of 1,000 ppm PBDEs, and these products that are within the weak regulation for PBDE contained 730 - 3,800 pg WHO-TEQ/gof brominated dioxins. Dioxins are extremely toxic in very small amounts. Levels of concern for dioxin substances are identified in the tenths of pictograms. The very high levels of dioxins measures signals that weak regulation of PBDEs can pose potential harms, not only from PBDEs, but also from PBDD/Fs. 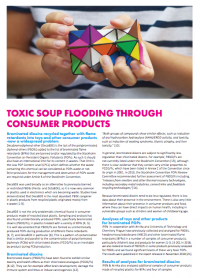 In the run-up to the Rotterdam Convention's 9th Conference of the Parties (COP9), IPEN completed a "Views" document that addresses some issues that will be discussed at the COP9. These include enhancing effectiveness; compliance; amendments to Articles 16 & 22; listing HBCD, carbosulfan and chrysotile asbestos; and more.

PFAS Pollution across the Middle East and Asia

Per- and polyfluoroalkyl substances (PFAS) have received significant public and media attention in the US, EU, and Australia, in part due to their toxicity, extreme persistence, and documented water pollution. However, information about PFAS in other parts of the world is largely lacking and the information which is available is difficult to access.

The results of the surveys indicate the following:

In this update about Low POPs Content Level written for the Stockholm Convention, information about the limits that IPEN supports for dioxins and furans, brominated POPs, and short-chain chlorinated paraffins is provided. Learn more in the brief found here. 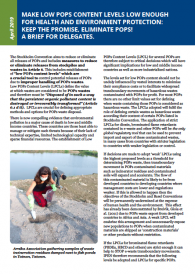 In this new report, which includes new data on PFAS exposures to Australian Firefighters, fire safety experts demonstrate that PFAS alternatives to PFOA and PFOS are similarly toxic and even harder to control, leading to increased pollution, exposure, and presence in the food chain. In contrast, world-class airports and major companies have thrown their weight behind fluorine-free firefighting foams. 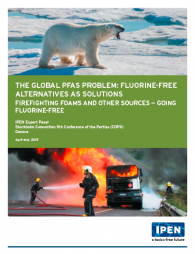 New research from IPEN and Basel Action Network (BAN) reveals dire human exposures and food chain contamination from highly toxic plastics in waste in Ghana that includes toxic e-waste shipped from Europe. Researchers have found the highest levels of brominated and chlorinated dioxins— some of the most hazardous chemicals on Earth— ever measured­­­­ in free-range chicken eggs in Agbogbloshie, Ghana. The contamination results primarily from the breaking apart of discarded electronics (e-waste) and burning plastics to recover metals. Plastics from vehicle upholstery are also burned on the site and contribute to the contamination.

Researchers analyzed the eggs of free-range chickens that forage in the Agbogbloshie slum, home to an estimated 80,000 people who subsist primarily by retrieving and selling copper cable and other metals from e-waste. The process of smashing and burning the plastic casing and cables, to extract the metals, releases dangerous chemicals found within the plastics, such as brominated flame retardants, and creates highly toxic by-product chemicals like brominated and chlorinated dioxins and furans. The sampling of eggs revealed alarmingly high levels of some of the most hazardous and banned chemicals in the world, including dioxins, brominated dioxins, PCBs, PBDE and SCCPs. 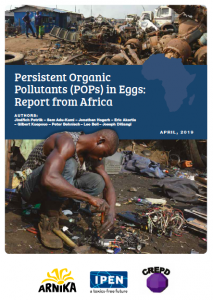 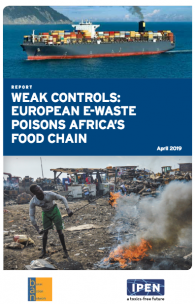 As the 2019 Basel-Rotterdam-Stockholm Conventions Conferences of the Parties (BRS COPs) approaches, IPEN has dedicated the first of its 2019 bi-annual global newsletters to cover persistent organic pollutants (POPs).

In the newsletter, entitled "IPEN Working To Eliminate POPs On The Ground," IPEN Science Advisor Dr. Sara Brosché states, "Strong measures under the Stockholm, Basel and Rotterdam Conventions are crucial to stop the production and release of POPs and should be effectively implemented nationally. Hazardous waste limits should be protective and regrettable substitutions with related toxic chemicals prohibited.However, this is far from enough. Only 28 out of thousands of potential POPs are listed under the Stockholm Convention today and efforts need to be scaled up dramatically.”

This newsletter covers some work of IPEN Participating Organizations around the globe who have researched and/or monitored POPs in their countries. Topics include POPs Country Situation Reports, POPs in Community Food Chains, Toxic Recycling, Non-combustion Technologies for POPs Waste Destruction, Dicofol and PFOA, Sulfluramid, and POPs in Our Oceans.

IPEN has released its "Views of Stockholm Convention COP9." This document is a summary statement of IPEN views on issues that COP9 will be called upon to address, including POPs wastes, tecnical assistance and regional centres, rules of procedure, compliance, listing of dicofol and PFOA, illegal traffic, rules of procedure, evaluation of PFOS, and more.

For consideration at the Stockholm Convention's COP9, the Treaty’s expert committee, the POPs Review Committee (POPRC), has recommended two substances for listing: dicofol and perfluorooctanoic acid (PFOA), its salts, and PFOA-related compounds. The POPRC has also recommended strengthening the listing of PFOS in the treaty. Finally, one Party has proposed changing the process for evaluating candidate substances.

In this new Guide, IPEN provides recommendations about listing dicofol and PFOA, and perspectives on the suggestion for amending the evaluation process and the PFOS evaluation. The Guide also provides information about the serious hazards related to the use of dicofol, PFOA and related substances, and PFOS. Read the Guide here

Please go here for more information about the proposal to amend the Stockholm Convention evaluation process for candidate substances.

Say No to Sulfluramid: Reasons for a Worldwide Ban on this Toxic Agrochemical (español, English, português)

Sulfluramid is a chemically-synthesized pesticide used as a formicide, which, as it breaks down, turns into perfluorooctane sulfonate (PFOS). PFOS is a toxic, extremely persistent and bioaccumulative pollutant, subject to worldwide restrictions pursuant to the Stockholm Convention on POPs. This Convention, intended to protect human health and the environment, took effect in 2004, and has been signed by most governments, includiing in Latin America and the Caribbean, where sulfluramid is widely used. At the upcoming Stockholm Convention COP9, IPEN believes that sulfluramid needs to be explicitly mentioned in Annex B on PFOS, and "acceptable uses" needs to be changed to "specific exemptions" for controlling leaf-cutting ants of the Attaand Acromyrmex genera. Learn more in this factsheet about sulfluramid.

Non-combustion techniques for the destruction of persistent organic pollutants (POPs) waste such as PCBs, dioxins and brominated flame retardants are urgently needed to destroy the world's growing stockpile of materials contaminated with the most dangerous contaminants on earth. Using incineration and cement kilns to attempt to destroy POPs only leads to the generation of more unintentionally produced POPs (UPOPs) in their emissions and solid waste. This new technical briefing paper from IPEN describes non-combustion techniques that have been commercialised and proven for the destruction of POPs. They are also considered to be more readily applicable to developing countries due to their less intensive capital and infrastructure requirements.

Non-combustion techniques for POPs destruction have never been more relevant as new POPs are added to the Stockholm Convention and new stockpiles of waste must be addressed.