IPEN has engaged in the science-to-policy (Science-Policy) discussions under the BRS and Minamata Conventions, SAICM, and the United Nations Environment Assembly (UNEA) for many years. In March 2022, UNEA adopted a resolution calling for the establishment of a new Science-Policy Panel to support action on chemicals, waste, and pollution.

The resumed session (OEWG 1.2) takes place in Bangkok from 30 January to 3 February 2023. Follow IPEN on social media for updates during the week of the event.

IPEN at the Plastics Treaty INC-1

Advancing the Importance of Chemicals and Health
Tuesday, 13 December 2022

The Plastics Treaty’s first Intergovernmental Negotiating Committee (INC-1) met in Punta del Este, Uruguay from November 28 through December 2, 2022. IPEN ensured that voices from all regions in the global south were present in the meeting by supporting in-person participation by nearly 30 public interest participating organizations, and coordinated over 45 IPEN NGO members, working collaboratively to advance our views and promote the adoption of a Treaty that accounts for the threats to human health and the environment from chemicals in plastics.

IPEN created several resources for delegates and others to educate them on the health threats from chemicals in plastics and to address solutions via a Plastics Treaty. Our new report “An Introduction To Plastics & Toxic Chemicals: How Plastics Harm Human Health And The Environment And Poison The Circular Economy” provides background on plastics as materials that pose threats to human health and includes a foreword by scientists who co-authored the recent studies showing that plastics and chemical production may have already exceeded the “planetary boundaries.” Our briefing for delegates on “Enhancing Controls to Protect Human Health from Plastics" describes how health and chemicals are relevant to the Treaty and how the Treaty should address these issues.

IPEN is featured in several news reports on the Plastics Treaty INC-1. Summaries from a few articles are below (click the headlines for the full story).

See all of IPEN's resources from the INC-1 here.

On Friday afternoon more than 2,000 experts will wrap up a week of negotiations on plastic pollution at one of the largest global gatherings ever to address what even industry leaders in plastics say is a crisis.

It was the first meeting of a United Nations committee set up to draft what is intended to be a landmark treaty to bring an end to plastic pollution globally.

“If we look 30 years from now, we’re set to have four times more plastic. We’re in an extremely unfortunate situation. So you must have a global approach to this,” said Björn Beeler, who was at the meeting as the international coordinator for the International Pollutants Elimination Network, or IPEN.

Entire beaches on what used to be pristine islands are now mounded with trash. Examination of a random handful of sand in many places reveals pieces of plastic.

Tadesse Amera, an environmental scientist, said the treaty should address not only waste but the environmental health issues posed by chemicals in plastics as the products are used, recycled, discarded or burned as waste. Amera is the director of Pesticide Action Nexus Association Ethiopia and IPEN co-chair.

“It’s not a waste management issue,” he said. “It’s a chemical issue and a health issue, human health and also biodiversity.”

On Wednesday, November 30, at the Plastics Treaty INC-1 negotiations in Punta del Este, Uruguay, IPEN co-hosted a science and health information briefing on "Health, Chemicals, Plastics and a Non-Toxic Circular Economy." The briefing was co-hosted by the governments of Uruguay and Switzerland, and with the Endocrine Society, and included speakers on the science and health risks from chemicals in plastics followed by a panel discussion.

You can download the presentation slides from the event here. 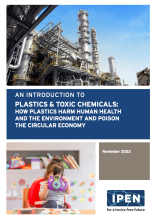 Ahead of the Plastics Treaty negotiations, a new guide informs delegates on the health and environmental risks from chemicals in plastics
Monday, 21 November 2022

See IPEN's Quick Views and other resources for the Plastics Treaty INC-1 here.

In May 2022, the G7 Climate, Energy and Environment Ministers recognized lead pollution as a burden on human health and the environment globally and expressed their strong commitment to reduce lead in the environment and to reduce the disproportionate lead exposure in vulnerable communities.

Now IPEN experts will present our work to document and eliminate lead threats and vision for solutions to lead poisoning at a G7 workshop in Berlin from 9-10 November 2022. IPEN Science Advisor Dr. Sara Brosché will speak on a plenary session on “Approaches to Address Lead,” and IPEN’s Lead Paint Elimination Campaigner from the Philippines Jeiel Guarino will speak on a breakout panel on lead in paint, to examine the existing challenge of lead paint around the world and discuss how G7 (and G20) can contribute to addressing this situation. 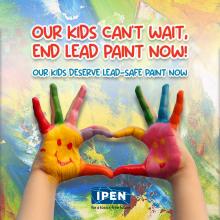 IPEN and 50 of its member groups from 40 countries will join the Global Alliance to Eliminate Lead Paint, a joint program of WHO and UNEP, for International Lead Poisoning Prevention Week (ILPPW) this October 23-29, emphasizing the urgent need to protect children’s health through global action to eliminate the use of lead paint. IPEN is a founding member of the Alliance and a member of its Advisory Board.