Welcome to IPEN’s Minamata page. Through this page you can show your solidarity with the victims of the Minamata disaster by adding your signature to the “Honoring Minamata Solidarity Statement.”

To read a Japanese version of this webpage, click here.

What happened in Minamata?

From 1932 to 1968, the Chisso Corporation released methylmercury in wastewater from its chemical factory into the Minamata Bay, and it bio-accumulated in fish and shellfish. The residents of Minamata, not realizing there was danger in doing so, ate fish and shellfish from the Bay (and the Shiranui Sea), which resulted in widespread mercury poisoning. Tens of thousands of people were affected. Symptoms of mercury poisoning include ataxia, numbness in the hands and feet, muscle weakness, narrowing of the field of vision, and damage to hearing and speech. In extreme cases, paralysis, coma and death can occur. A congenital form of mercury poisoning can also affect fetuses in the womb.

As a result of the immense poisoning in Minamata, mercury poisoning is now sometimes referred to as “Minamata Disease.”

Why stand in solidarity with Minamata victims and victims’ groups?

More than fifty years have passed since Minamata disease was first diagnosed and victims’ groups remain dissatisfied with the responses to this tragedy by the Government of Japan and the Chisso Corporation. Victims’ groups want all victims to be recognized and compensated. They want a comprehensive health study of people in the impacted areas. They want to ensure that the Polluter Pays Principle is fully and properly implemented. They want the contaminated areas around Minamata Bay to be cleaned up. Finally, the Minamata victims’ groups want a health and welfare system established that will enable residents to live secure lives.

When was IPEN’s Solidarity Statement introduced?


To show solidarity with the Minamata victims, IPEN drafted a statement called “Honoring Minamata.” This statement was released at the 2nd International Negotiating Committee (INC2) for a global treaty on mercury. INC2 was held in Chiba, Japan, so, due to the location, even more attention than usual was brought to the Minamata issue and mercury poisoning. 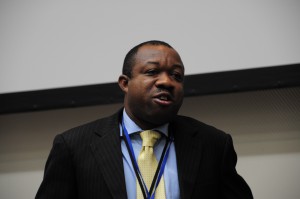 At the INC2, IPEN presented the “Honoring Minamata” statement to Minamata victim Shinobu Sakamoto at a highly emotional signing ceremony. At the ceremony, IPEN representatives from various regions commented on how they relate to the Minamata tragedy based on experience in their own countries and regions. Speakers included Leslie  Adogame from Sustainable Research and Action for Environmental Development (SRADev), Nigeria; Fernando Bejarano from Centro de Análisis y Acción sobre Tóxicos y sus Alternativas (CAATA), Mexico; Olga Speranskaya from Eco-Accord, Russia (and IPEN Co-Chair); and Manny Calonzo from Global Alliance for Incinerator Alternatives, Philippines. 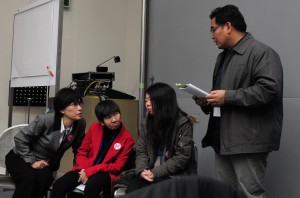 Manny captured the sentiment of the signing ceremony in a stirring statement that you can read here: M. Calonzo Statement of Solidarity with Minamata Victims 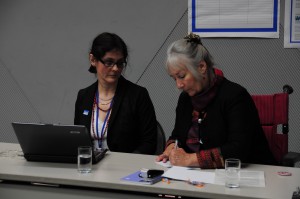 At the ceremony, IPEN Co-Chairs Mariann Lloyd-Smith and Olga Speranskaya officially signed the statement, which rapidly gained the global support of 72 NGOs from 42 countries in less than one week.  See the current list of supporters here.

What does the ribbon mean? 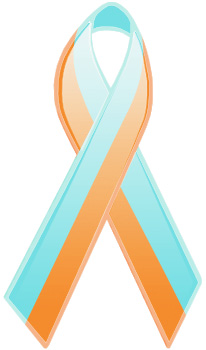 In an effort to elevate awareness and show solidarity with the Minamata community, IPEN produced several hundred orange and blue ribbons for delegates to wear at INC2, with guidance from Minamata colleagues. The blue represents the seaside community of Minamata, which depends on the sea for its livelihood, and the orange represents the warning signs. The orange-colored “no fishing” signs were posted to warn the Minamata community of dangerous mercury levels in the water. 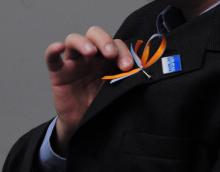