In June 2010, then-Prime Minister of Japan Yukio Hatoyama proposed naming the global mercury treaty, once finalized, the “Minamata Convention.” Unfortunately, the proposal was not discussed with Minamata victims and support groups before the announcement.

At the 2nd International Negotiating Committee (INC2) held in Japan in January, 2011, a statement was therefore made by Minamata victims and support groups in opposition to naming the international treaty for the Minamata disaster before victims’ issues were resolved. Specifically, the groups called for:

Read the Japanese or English version of the Statement by Minamata Victims and Supporter Groups Addressing the Government of Japan’s Proposal to Call the Mercury Treaty the “Minamata Convention.”

At the INC2, Minamata victim Shinobu Sakamoto personally handed the statement to the Vice Minister of Environment of Japan, Shoichi Kondo. 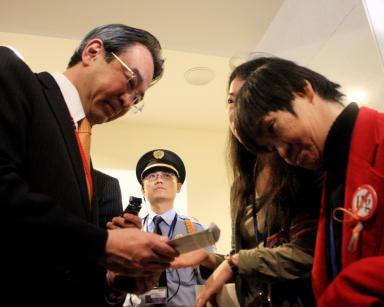 20 December, 2012: A Global Mercury Treaty, not a Minamata Convention

IPEN suggests the pending global mercury treaty not be named the Minamata Convention. This is because it appears to us that the new treaty will not likely be sufficient to:

27 December, 2012: Victims of Minamata Disease and citizens’ groups delivered a statement to Japan’s Prime Minister, as well as Ministers of the Environment, Economy and Foreign Affairs, the Governor of Kumamoto Prefecture, and the Mayor of Minamata City, stating that they are opposed to calling the Mercury Treaty the “Minamata Convention” if the issues of Minamata are not resolved and the Lessons Learned from Minamata are not reflected in the Mercury Treaty. Read the statement