Since 2005, IPEN has been carrying out sampling projects in countries around the world to test for persistent organic pollutants (POPs) and other toxic chemicals. IPEN has collected eggs laid by free range chickens close to waste incinerators, cement kilns, the metallurgical industry, waste dumps and chemical production facilities in order to determine if the U-POPs (unintentional POPs) created during certain combustion and industrial processes can be found in the eggs, and, if so, at what levels. Chicken eggs were chosen for the studies because they are common food items for people and their fat contents make them appropriate for monitoring fat-soluable chemical pollutants such as U-POPs. Additionally, eggs have been found to be sensitive indicators of POPs contamination in soils or dust and are an important exposure pathway from soil pollution to humans. Eggs from contaminated areas can readily lead to exposures with exceeding thresholds for the protection of human health (Van Eijkeren, Zeilmaker et al. 2006, Hoogenboom, ten Dam et al. 2014, Piskorska-Pliszczynska, Mikolajczyk et al. 2014).

Please read below for information about the studies conducted and the related data / outcomes. 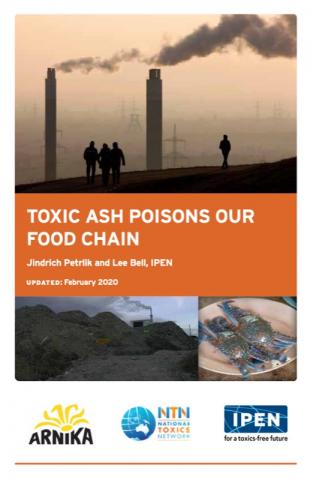 Toxic Ash Poisons Our Food Chain details the toxic threats from waste incinerator ash generated in the millions of tons each year. The report includes analysis of the global scale of toxic ash and other residues from waste incineration contain dioxins, furans (PCDD/Fs), and a range of other highly toxic POPs, which occur at levels threatening to human health and the environment. 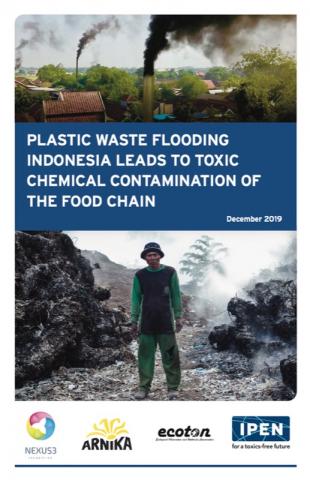 The high levels of dioxin in food chains as a result of plastic incineration in Indonesian villages are detailed in Plastic Waste Poisons Indonesia's Food Chain. The study measured dioxin levels in free-range chicken eggs in the villages of Tropodo and Bangun, where plastic waste scavenged from mountains of imported paper waste is sold to tofu makers and used as a fuel source for the industry's machinery. 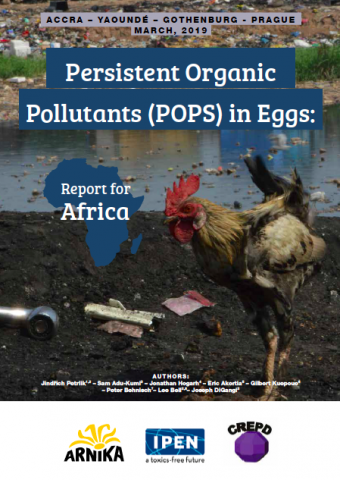 POPS in Eggs: Report for Africa investigated POPs contamination at a total of six sites: the world’s largest e-waste scrap yard in Agbogbloshie (Ghana); medical waste incinerators in Accra (Ghana), Kumasi (Ghana) and Yaoundé (Cameroon); and two open-burning waste dump sites in in Yaoundé (Cameroon). The study measured POPs in eggs because free-range chickens are “active samplers” of materials on the ground. Eggs also represent an important human exposure pathway through consumption. To our knowledge, this is the first study to measure POPs in free-range chicken eggs from hens foraging at the Agbogbloshie e-waste scrap yard, as well as in Yaoundé.

Dioxins: The Dirty Dozen are Still with Us(2020) 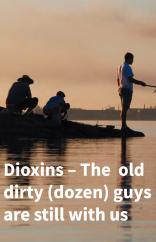 This brief overview of work by Arnika and IPEN calls into question whether the "Dirty Dozen" chemicals listed in the Stockholm Convention are adequately addressed, and whether sufficient safeguards against the toxic impacts of these POPs exist for human health and the environment. 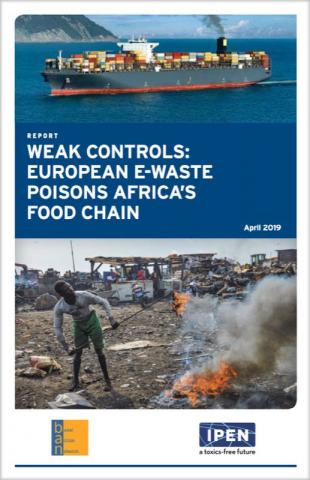 For the Weak Controls: European E-Waste Poisons Africa's Food Chain report, IPEN sampled eggs in Agbogbloshie, Ghana, Africa suspected to have elevated levels of POPs banned under the Stockholm Convention and found alarmingly high levels of some of the most hazardous chemicals on earth, including dioxins, brominated dioxins, PCBs, PBDE, and SCCPs in the eggs of chickens that had foraged in areas where electronic waste was burned to recover metal. The highest-ever measured level of brominated dioxins in egg samples were discovered at Agbogbloshie.

POPs in Chicken Eggs from Hotspots in China (2015)

In 2015, the report POPs in Chicken Eggs from Hotspots in China examined toxic chemicals in eggs in China. The data and analyses of free range chicken eggs discussed in this report were obtained during a 2 1/4 year-long joint project of three NGOs: IPEN (Sweden), Green Beagle (China) and Arnika – Toxics and Waste Programme (Czech Republic). They were obtained from local people and/or sampled by Chinese NGOs Nature University and Green Beagle during field visits in 2013 and 2014 to seven different localities in China. Originally produced in 2015, this report was updated in 2016. 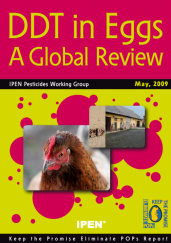 In 2009, a third report was completed: DDT in Eggs, A Global Review. For this study, the DDT levels that were previously determined in the eggs that were collected for The Egg Report were analyzed. Additionally, new eggs from various POPs hotspots in the Czech Republic and Albania were gathered and also tested for DDT, and the information from those samples was also included in the DDT in Eggs report.

The Egg Report: Contamination of Chicken Eggs from 17 Countries by Dioxins, PCBs and Hexachlorobenze (2005) 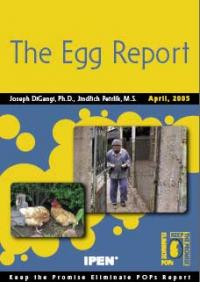 In 2005, IPEN carried out a study, The Egg Report, which looked for polychlorinated dioxins, furans (called "PCDD/Fs" or "dioxins"), PCBs, and HCB contamination in free-range chicken eggs in 17 countries on five continents. The chemicals included in the study are known as unintentional persistent organic pollutants (U-POPs), because they are created as unintentional byproducts of certain combustion and industrial processes. They were chosen for the study to illustrate the need for international guidelines to help countries design facilities that avoid or minimize formation and environmental release of POPs; guidelines on substitute materials as a means of reducing and eliminating POPs; the importance of completely destroying POPs in waste before allowing them to be released to the environment; and the need for more publicly available information on U-POPs in our food, our bodies and the environment. 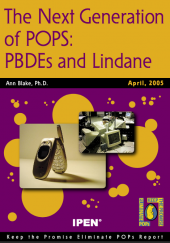 An additional study, The Next Generation of POPs: PBDEs and Lindane, looked for the presence of the pesticides hexachlorocyclohexanes ("HCHs," including lindane) and brominated flame retardants, such as polybrominated diphenyl ethers (PBDEs) and hexabromocyclododecane (HBCD). These are chemicals that have the same characteristics as the original 12 chemicals already slated for elimination or minimization in the Stockholm Convention on POPs. IPEN believed that they should be added to the Convention as targets for global elimination, and most of them have since been added.

Both studies found dangerous levels of toxic chemicals in eggs that were collected near waste incinerators, cement kilns, the metallurgical industry, waste dumps and chemical production facilities. The lowest levels of contamination had more than two times the background level of dioxins. Seventy percent of the samples exceeded the EU limit for dioxins in eggs; sixty percent exceeded proposed EU limits for PCBs in eggs. Three egg samples reported in the study contained some of the highest dioxin levels ever measured in chicken eggs. Lindane, beta-HCH and the PBDE flame retardants were found in all samples. Another flame retardant, HBCD, appeared in 80 percent of the samples. The studies represent the first data about these substances in most of the countries examined. 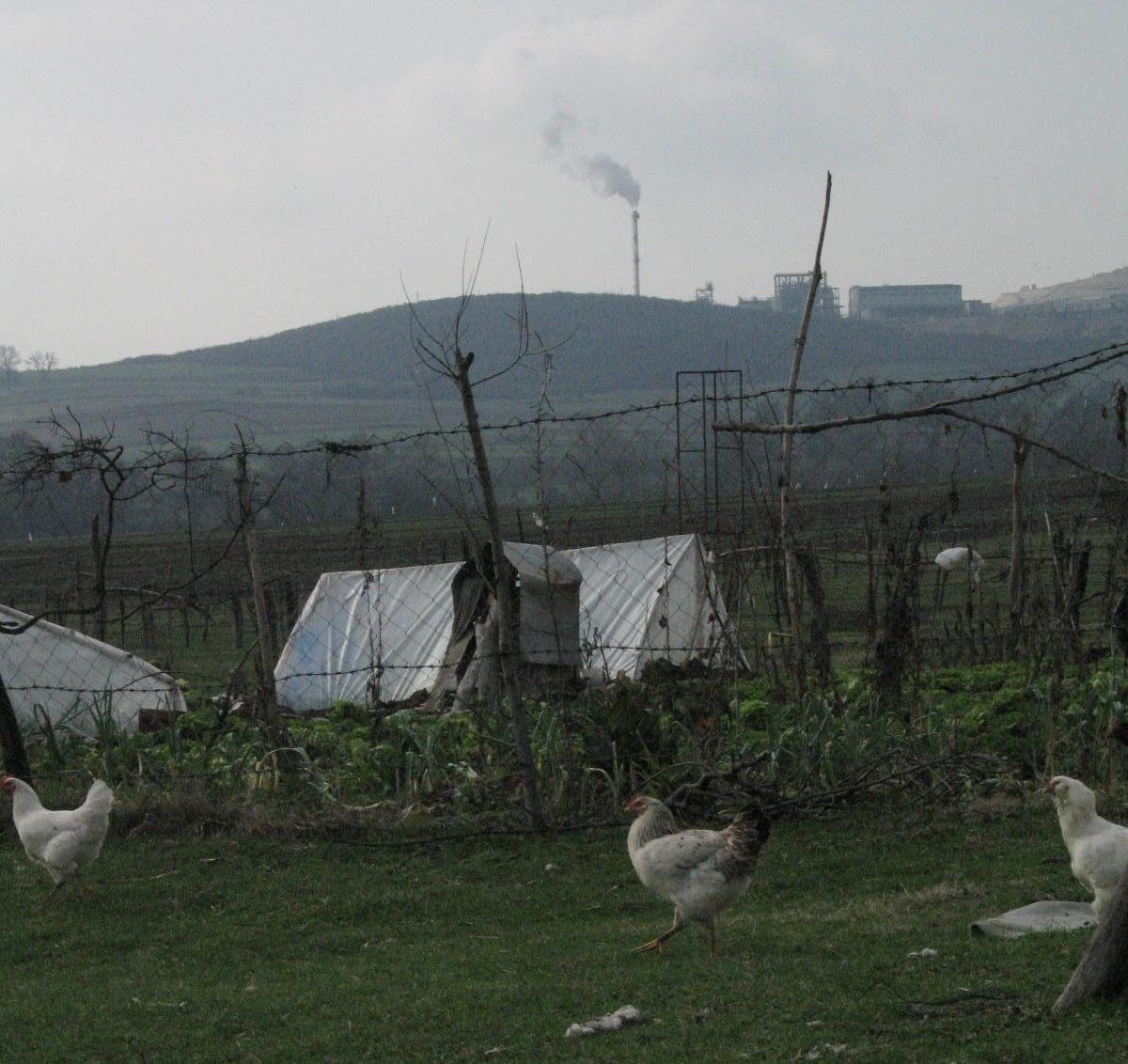