Once in Japan, IPEN representatives carried out two important actions to raise awareness about mercury contamination.

During the INC2, IPEN distributed more than 300 samples of canned tuna to delegates in order to highlight the global problem of mercury contamination in fish. 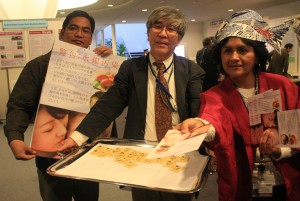 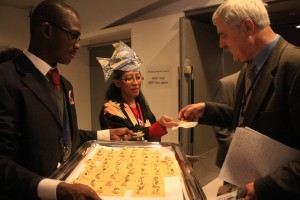 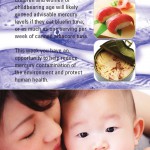 From 1932 to 1968, the Chisso Corporation released mercury from its chemical factory into the Minamata Bay in Japan. Once in the Bay, this was converted into the highly toxic methylmercury, which in turn bioaccumulated in fish and shellfish. The residents of Minamta, not realizing there was danger in doing so, ate fish and shellfish from the Bay (and the Shiranui Sea), which resulted in widespread mercury poisoning. Tens of thousands of people were affected.

More than fifty years have passed since Minamata disease was first diagnosed, and victims’ groups remain dissatisfied with the responses to this tragedy by the Government of Japan and the Chisso Corporation. To underscore their dissatisfaction and in response to a proposal by the Japanese government to call the  mercury treaty the “Minamata Convention,” Minamata victims and support groups drafted a statement in opposition to naming the international treaty for the Minamata disaster before victims’ issues are resolved. At INC2 this statement was delivered by Minamata victim Shinobu Sakamoto to the Vice Minister of Environment of Japan, Shoichi Kondo.

To show solidarity with the Minamata victims, IPEN wrote a statement called “Honoring Minamata” and released it at the INC2 in a highly emotional ceremony. Read the document here: Arabic, English, French, Japanese, Russian, Spanish

To further highlight solidarity, IPEN invited organizations to sign on to the statement, and wear a blue and orange ribbon- the blue representing the seaside community of Minamata, which depends on the sea for its livelihood, and the orange representing the “no fishing” warning signs that were posted to warn the Minamata community of dangerous mercury levels in the water.

Get more information about the “Honoring Minamata” statement and how you can sign on here.