IPEN participated in the Mercury Treaty's 2nd Conference of the Parties (COP2), which took place from 19 to 23 November, 2018 in Geneva, Switzerland. Technical briefings on Effectiveness Evaluation and the Specific International Programme kicked off the week on 18 November.

"We should take advantage of the synergies available between the Minamata Convention and the Paris Agreement and seize the opportunity to make large scale global reductions in mercury and carbon pollution. Parties should be bold and go beyond compliance with the Minamata Convention, rapidly replacing coal-powered energy with renewables instead of waiting for marginal pollution reductions under future BAT-BEP implementation for coal burning."

"IPEN issues a challenge to all Parties who have not done so, to show further commitment to end the mercury trade and announce that their country has banned mercury exports at COP3." 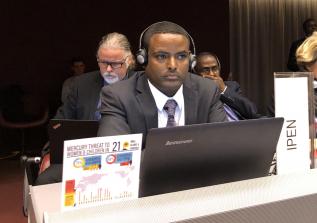 IPEN set up its booth at the conference venue today, with the theme of "Protecting Paradise." Based on the alarming results from the new study Mercury Threat to Women & Children Across 3 Oceans, and what it means for the communities living in the (mostly) Small Island Developing States where sampling was carried out, IPEN decided to highlight the beautiful, "paradise-like" environments of the islands and underscore the importance of ending mercury exports and stopping the use of coal in order to support island nations and "Protect Paradise."

In addition, IPEN developed a "Travel Brochure" and "Tour Packages" in keeping with the theme. 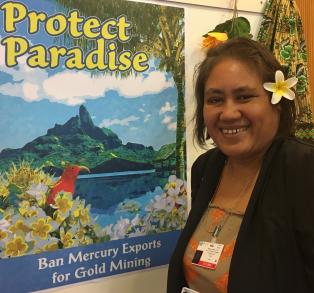 IPEN / BRI press release: (Göteborg, Sweden) A new study has found elevated levels of toxic mercury in women of child-bearing age in countries across the Pacific, Caribbean, and Indian Ocean. More than half of all women who were sampled measured above the US EPA level of concern, and three out of four women measured had mercury levels that have been associated with the onset of mercury-related impacts to fetal development. The study establishes that mercury pollution has accumulated across the worlds’ major oceans, contaminating the marine food chain and posing a threat to a sizable portion of the world’s island populations.

In light of today's technical briefing on Effectiveness Evaluation for the Treaty, IPEN prepared a one-page document outlining its views that new, science-based biomonitoring data is needed for the process. Read it here.

IPEN held its preparatory meeting for the 2nd Conference of the Parties at the meeting venue in Geneva. 23 IPENers from 20 countries attended the meeting, which focused on IPEN's priorities for the week ahead. 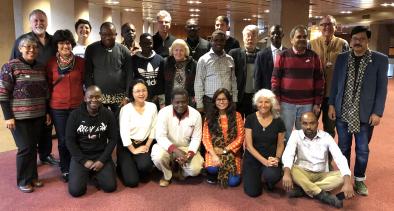 Centre for Environment Justice and Development (CEJAD) conducted a study to establish mercury use, trade and supply within the ASGM subsector in Kenya. The study methodology entailed literature reviews; key informant interviews; as well as survey of some of the miners in select mines in Siaya and Migori Counties. The main objective of the study was to asses mercury trade and supply chains in the target ASGM hotspots in Kenya. Read the study here.

This document presents IPEN's views about some issues that will be addressed at the 2nd Conference of the Parties, including mercury supply sources & trade, effetiveness evaluation, waste thresholds, contaminated sites, and more.