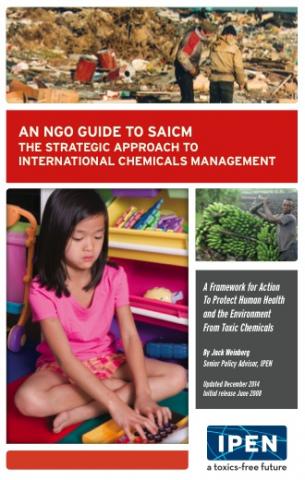 This booklet is an introduction to the Strategic Approach to International Chemicals Management (SAICM), a global policy and strategy that was adopted by governments and stakeholders to protect human health and ecosystems from the harms caused by exposure to toxic chemical substances. It is the first in a series being produced to help raise awareness in all parts of the world about toxic chemical exposure as a serious global, national and local concern, and is part of a global campaign to build support within civil society in all countries of the world for action to reform how chemicals are produced, used and managed in order to minimize and eliminate the harms currently caused by toxic chemical exposure.

This booklet begins with an introductory section, then goes on to provide some background that will help put SAICM into its historical context. It then describes in a more detailed way what SAICM actually is, and presents ways that NGOs and civil society can make use of SAICM. It concludes with a call to action including the text of a Global Civil Society Statement on SAICM-a statement that NGOs and other organizations in all countries are invited to review and to endorse.

In December, 2014, IPEN updated the booklet with a new preface. The new text addresses SAICM developments since the Guide was first released in 2008, touches on the wide scope of SAICM, and includes information about lead and pesticide poisoning and emerging toxics issues.