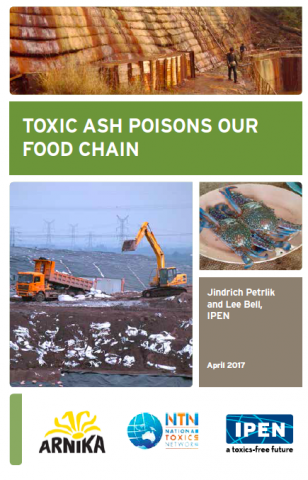 Waste incineration is often proposed by industries as a “solution” to waste management problems and a superior alternative to landfill. However, burning waste creates large amounts of toxic ash and other residues (approximately 30% by weight of the original waste volume) which are either dumped in landfill, on open ground and in some countries deep in underground voids. In some jurisdictions ash is incorrectly thought to be benign resulting in its use in agricultural settings and construction leading to significant POPs exposure potential. Municipal waste incineration destroys valuable resources and converts non-toxic material into toxic ash. Hazardous and medical waste incineration generates significant quantities of toxic ash when there are a range of non-incineration alternatives available to treat these wastes without creating POPs contaminated residues.

However, there are currently hundreds of waste incinerators around the world generating millions of tons of toxic ash every year, releasing POPs to the environment either from waste disposal practices or under the guise of valorized “products” such as construction materials, agricultural soil amendment and road base. This report examines POPs pollution that is occurring as a result of these practices, citing relevant scientific literature, case studies and the inadequacies of the regulatory regime to address the problem. A key focus of this report is the need for global adoption of strict “Low POPs Content Levels” which define POPs wastes and require them to be treated as hazardous waste where its POPs content must be destroyed. This report shows how the current weak Low POPs Content Level for dioxin is resulting in poor management of waste incineration ash, allowing transboundary movement of wastes and contamination of food products such as eggs which exceed EU standards and tolerable daily intakes for humans.

This report provides extensive data on the scale of the toxic ash problem, POPs in waste incinerator ash, modes of release to the environment, inadequate management practices, exposure scenarios for human receptors and their consequences. The Stockholm Convention on POPs requires that parties take measures to reduce and eliminate POPs from the environment yet waste incineration continues to undermine the Convention by creating millions of tons of POPs contaminated residues every year. Article 10 of the Stockholm Convention requires that the public be given full access to information on POPs sources and how they are impacted by them. Until now, information on the growing POPs contamination events caused incinerator residues has not been easily accessible to the public.

This report publicly exposes the reality of incineration ash contamination and raises strong arguments for the phase out of waste incineration in favour of non-combustion techniques for waste treatment and sustainable techniques for waste management. It also makes clear the need for the establishment, at global environmental conventions, of strict Low POPs Content Levels to prevent transboundary movement of toxic wastes to low income countries and environmentally harmful distribution of waste incineration residues in all countries.