A Call to Action: Free Children from BPA's Toxic Legacy 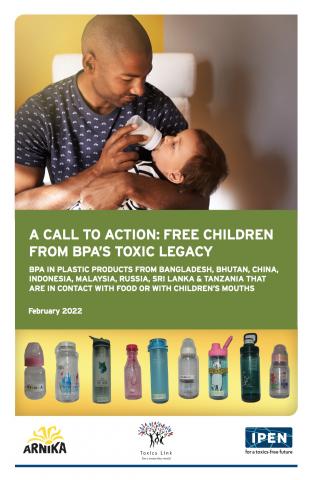 This report studied BPA in products in Bangladesh, Bhutan, China, Indonesia, Malaysia, Russia, Sri Lanka & Tanzania that come into contact with food or with children’s mouths.

Bisphenol A (BPA) is a synthetic chemical used in a wide range of products such as epoxy paints and glue, lining of food cans, and thermal paper receipts. BPA is also used as a building block in polycarbonate plastics which can be used to make food containers and baby bottles, despite BPA being a known endocrine disrupting chemical (EDC). Several million metric tonnes of BPA are produced yearly, even though BPA is associated with several negative effects on the environment and human health.

BPA and its metabolites have been found in urine, blood, saliva, umbilical cord, placenta and amniotic fluid and samples collected from people around the world indicate that more than 90% of the world’s population have BPA in their bodies. New-born and infant exposure to BPA increases the sensitivity of hormone-sensitive organs to later-life exposures to estrogens or chemical carcinogens.

Moreover, BPA levels found in children are typically higher than in adults. This is due to the higher food consumption per body weight in early life and dust ingestion associated with hand-to-mouth contact behaviour in children, as well as a higher use of plastic products. Babies are exposed to BPA when it leaches from bottles and other containers into beverages and food they consume.