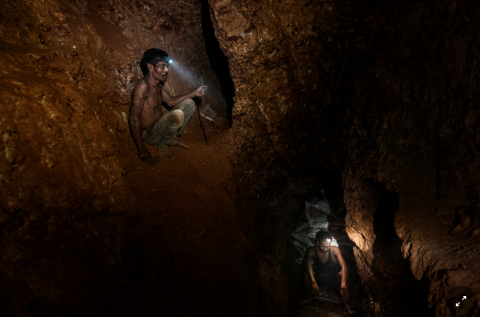 A small mine on Sumbawa. Miners often dig for ore on land without permission or government permits. Credit...Adam Dean for The New York Times

CIDAHU, Indonesia — Thousands of children with crippling birth defects. Half a million people poisoned. A toxic chemical found in the food supply. Accusations of a government cover-up and police officers on the take.

This is the legacy of Indonesia’s mercury trade, a business intertwined with the lucrative and illegal production of gold.
More than a hundred nations have joined a global campaign to reduce the international trade in mercury, an element so toxic there is “no known safe level of exposure,” according to health experts.

But that effort has backfired in Indonesia, where illicit backyard manufacturers have sprung up to supply wildcat miners and replace mercury that was previously imported from abroad. Now, Indonesia produces so much black-market mercury that it has become a major global supplier, surreptitiously shipping thousands of tons to other parts of the world.

Much of the mercury is destined for use in gold mining in Africa and Asia, passing through hubs such as Dubai and Singapore, according to court records — and the trade has deadly consequences.

“It is a public health crisis,” said Yuyun Ismawati, a co-founder of an Indonesian environmental group, Nexus3 Foundation, and a recipient of the 2009 Goldman Environmental Prize. She has called for a worldwide ban on using mercury in gold mining.

Mercury can be highly dangerous as it accumulates up the food chain, causing a wide range of disorders, including birth defects, neurological problems and even death.

Today, despite the risks, small-scale miners using mercury operate in about 80 countries in Asia, Africa and the Americas. They produce up to 25 percent of all gold sold.

As gold makes its way around the world, so too does mercury — poisoning the air and food of people thousands of miles away. Small-scale gold mining is the largest single source of mercury pollution.

A recent study of women on 24 remote islands found that more than half displayed high mercury levels. The women lived far from sources of mercury pollution but ate a diet rich in fish. In the United States, contaminated fish is the No. 1 source of mercury poisoning.

Indonesia, the world’s fourth most populous nation, stands out for its huge number of outlaw gold miners and for concerns that some law enforcement officials assigned to police the trade are instead profiting from it.

As much as anyone, Cece Rifa’i, a former miner, is responsible for Indonesia’s mercury boom and spreading the scourge of contamination across the country.

But he has no regrets.

“I don’t feel guilty about anything,” he said from the veranda of his two-story home on the island of Java.

For years, Mr. Cece was a pioneer in a network of illegal mercury producers, traders and smugglers who supply gold miners across Indonesia with mercury, used to extract gold from crushed ore.

On a single day, operating a furnace he constructed in his backyard, he could produce a ton of black-market mercury worth more than $20,000, he said.

For decades, Indonesia got most of its mercury legally from the United States and Europe. But recognizing the harm it was doing, Western countries began reducing mercury exports six years ago.

Since 2013, 114 countries, including Indonesia, have signed on to the Minamata Convention, a treaty that took effect in 2017 and that requires participating nations to reduce the export and use of mercury in a variety of industries.

Nevertheless, United Nations trade data shows that Indonesia became a significant exporter of mercury from 2015 to 2017, peaking at more than 320 tons in 2016.

Ms. Yuyun, the environmentalist, estimates that illicit manufacturers in Indonesia produce more than 10,000 tons of mercury a year. About a third is used in gold mining in Indonesia, she said, the rest smuggled overseas.

The government banned the use of mercury in gold mining in 2014, but has done little to curb its use, clean up contaminated sites or warn the public of the danger.

In surveys of 24 hot spots, the Nexus3 Foundation and a team of independent doctors found more than 700 cases of suspected mercury poisoning, including children with birth defects and villagers with irreversible neurological disorders. At least 45 have died.

Based on these studies, the environmental group estimates that decades of mining have poisoned 500,000 people.

The mercury trade is lucrative, but the gold business it supports is far more profitable. By some estimates, Indonesia’s illicit small-scale gold miners produce as much as $5 billion a year.

Poverty is widespread in Indonesia, and many people, jobless and desperate, have flocked to the gold fields.

As miners, they often live outside the law, digging for ore on land without permission or government permits, sometimes in national parks and protected areas.

To extract gold, the miners mix liquid mercury with crushed ore. Gold in the ore binds with the mercury to produce an amalgam of the metals. The miners heat the small lump with a blowtorch, sending mercury vapors into the air and leaving the gold behind.

Many miners like the method because it gives them a quick return.

Government officials have known about mercury-related health problems in the gold fields since at least 2012, Ms. Yuyun said, but they have not warned residents about the dangers of consuming potentially contaminated rice and fish.

But the ministry has yet to notify subjects of their test results or issue a public warning for fear of setting off panic over the safety of the food supply.

“It’s a crime to deliberately conceal the damning results,” said Ms. Yuyun, the lead researcher on small-scale mining at the International Pollutants Elimination Network. “People are dying and have little access to any effective treatment. The government has to stop the mercury trade and clean up the mess.”

Environment Ministry officials declined to be interviewed and did not respond to written questions.

Officials in the office of Indonesia’s president, Joko Widodo, acknowledged that mercury contamination is a serious problem and said he had issued a national action plan that calls for cleaning up four hot spots.

The president also has directed police and military commanders to take action against personnel found to be involved in the illegal metals trade. Officials said they were unaware of anyone being disciplined. Spokesmen for the national police and the military declined to be interviewed.

Officials say the public has been warned about mercury’s dangers, but there is little evidence of this in mining areas. Many miners insist it is not hazardous.

The role of corrupt officials in the gold and mercury trade is widely recognized but seldom addressed by the government.

Some members of the police and military are said to finance gold mining operations, extort protection money, oversee their own mines and ensure the safe transit of mercury and gold. Many tons of mercury seized by the police have gone missing.

“When we went to the field and talked to the people there, they admitted that the police gave them the mercury,” said Putu Selly Andayani, head of the West Nusa Tenggara Province Trade Agency. “They said the police helped them to set up the illegal mining.”

Throughout the country, miners work with mercury in plain sight without fear of punishment. The occasional arrests of furnace workers and smugglers have barely dented the supply.

Mercury remains cheap and plentiful in the gold fields, where it is sold in mining supply shops or by dealers who travel from village to village. Dozens of Indonesian websites offer mercury for sale.

One international smuggler arrested last year was Chander Hass Khera, an Indian citizen. Seized documents show that he shipped 9.7 tons of mercury to South Africa, Thailand and India in 2017.

Last year, he bought an additional 3.8 tons from a dozen traders, said Dyah Paramita, a researcher at the Center for Regulation Policy and Governance in West Java, who reviewed court records.

Soon after the smuggler’s arrest, most of his confiscated mercury disappeared from police custody. The police told the court they were investigating.

In 2010, as wildcat mining boomed, he said he started searching for cinnabar, the ore from which liquid mercury is produced.

Inspired by his years vaporizing mercury by blowtorch, he constructed a simple concrete furnace with a narrow trench in the center for a wood fire, steel buckets to heat the reddish ore and fixtures to capture the mercury as it cooled and liquefied.

His home in Sukabumi Regency in western Java is an unlikely spot for this backyard industry. A picturesque area of rice paddies and simple villages, there is no cinnabar ore or nearby highway. There is not even a road to Mr. Cece’s house in Cidahu village.

But on his patio, Mr. Cece built a furnace so large it could produce a ton of mercury in 24 hours.

He hired local men — “robbers, thieves and hit men,” he called them — to work the furnace.

The inspectors found no health problems.
On one occasion, he said, he demonstrated his furnace to a high-ranking police official from Jakarta.

Soon dozens of copycat furnaces began appearing in Sukabumi and on islands closer to the cinnabar mines, helping flood the black market with cheap mercury.

“We all know that he is the pioneer,” said, Alung, 35, who learned the business working for Mr. Cece. Like many Indonesians, he uses one name.

The police cracked down on mercury producers in Sukabumi in 2017, shutting down three dozen furnaces and arresting about 100 people, including Mr. Cece.

He and nearly all the others avoided jail by agreeing to stop making mercury. Mr. Cece dismantled his furnace.

The police seized nearly a ton of mercury from three furnaces in the village. Mr. Cece and Mr. Alung suspect the police sold it because they brought their own containers to haul it away.

Before the crackdown, mercury production meant jobs.
Whatever the health hazard, the work paid better than anything else, and they were disappointed when the furnaces were shut down.

“We know it’s dangerous,” Mr. Alung said. “But we’re sad. We no longer have the income.”