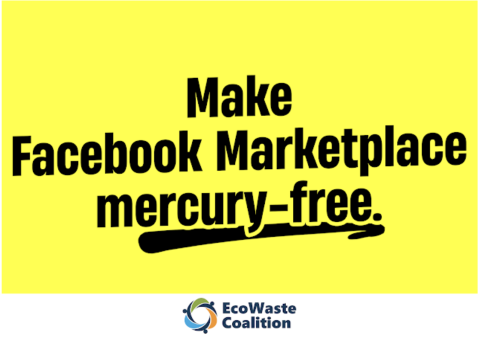 Despite years of toxicity warnings, skin whitening creams remain on store shelves around the world. These cosmetics often contain mercury, a dangerous neurotoxic metal that can damage the kidneys and heart and cause permanent brain damage. Marketing of skin whitening creams has been called a legacy of colonialism, following racism and social discrimination based on skin color, and is perpetuated by racist media and popular culture, which shows light colored skin as the beauty ideal.

In August, IPEN member EcoWaste Coalition marked the fifth year of the Minamata Convention on Mercury’s entry into force by visiting stores in Quezon City, Philippines to expose violations of the local ordinance banning the sale of mercury-containing cosmetics. EcoWaste has also called on Facebook Marketplace to crack down on online sales of mercury-tainted cosmetics, noting that skin whitening creams containing mercury are still widely sold on the platform.

While FDA and other regulators call for a safety standard of no more than 1 part per million (1 ppm) of mercury in cosmetics, EcoWaste alerted Facebook to testing that showed extremely high levels of mercury in products, including

In a letter to FB Marketplace, EcoWaste stated,

“There are dozens of advertisements on FB Marketplace for skincare cosmetics that have been warned by the Food and Drug Administration (FDA) for containing violative levels of mercury and/or for lacking the required market authorization.”

Young women are often targets of skin whitening advertising and are among the largest buyers, yet women of childbearing age are especially at risk since mercury exposure is linked to birth defects and damage to the developing fetus.

While mercury is banned for most cosmetics under the Minamata Convention, the agreement does exempt some eye-area products such as mascaras, which use mercury as a preservative. Lee Bell, IPEN's Mercury and POPs Advisor, noted that “Having an exemption in the Minamata Convention for this use is problematic as it sends a signal that toxic mercury in cosmetics should be tolerated.  It’s past time to end this exemption and strengthen the convention to rid cosmetics with mercury once and for all.”