A major disaster looms over head 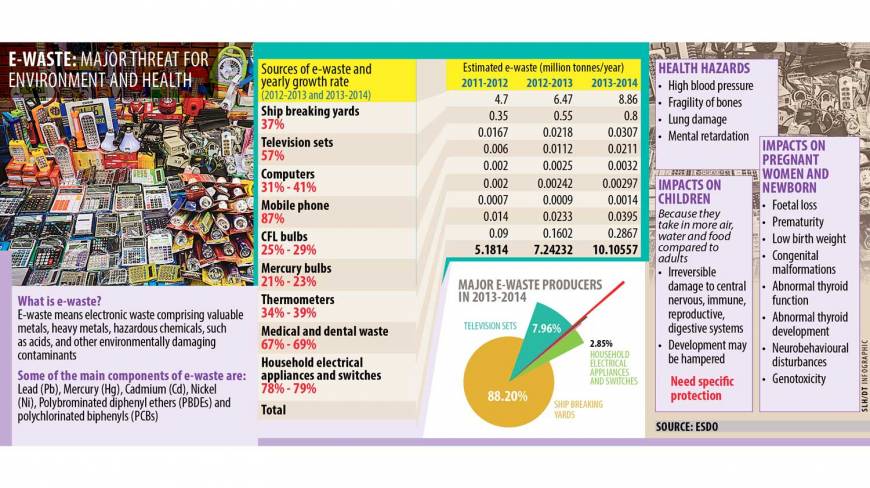 Even five years ago, most households and offices that could afford a personal computer, had giant television-like CRT monitors. But, over the last few years, sleek and convenient LCD and LED monitors have replaced hundreds of thousands of these CRT monitors.

Interestingly, most people, who have switched from cathode ray tube (CRT) to liquid crystal display (LCD) and light emitting diode (LED) technologies, have very little idea about what happened to the monitors they have discarded.

Neither are they aware of the environmental and health hazards that electronic wastes or e-wastes, including these CRT monitors, could cause if they are not properly managed.

Not just home users, even most government and non-government organisations and business entities, do not know much about what might happen if tube lights, CFL bulbs, mobile phones, TV sets and other household electronic goods that they use and throw away carelessly every day, are not properly managed as waste.

What makes the e-waste scenario even more frightening is the fact that there is no binding regulation regarding the management of these toxic throwaways.

In 2012, the government’s Department of Environment (DoE) prepared a draft E-waste Control Policy. After about two years, the policy has still been waiting to get the Law Ministry’s nod.

Seeking anonymity, a deputy director of the DoE told the Dhaka Tribune that the draft policy had been lying in the ministry’s deep freezer because of a serious lack in political will.

A recent study has brought up an alarming figure that around 50,000 children in Bangladesh are involved with the process of informal collection and recycling of e-wastes and exposure to toxic materials have led to death and various illnesses among a significant number of these children. Around 40% of these children work at various ship-breaking yards.

In Bangladesh, more than 15% of child workers die every year as a result of e-waste recycling and more than 83% are exposed to toxic substances and are forced to live with long-term illnesses.

E-waste comprise of stuff that contain valuable and heavy metals, hazardous chemicals such as acids, and other environmentally damaging contaminants.

At the molecular level, e-waste components are lead, mercury, cadmium, nickel, polybrominated diphenyl ethers and polychlorinated biphenyls. Some of them are as hazardous for the environment and human health as their names sound.

The study, conducted by the Environment and Social Development Organisation (Esdo), also shows that the generation of e-waste has increased significantly in recent years. At present Bangladesh generates roughly 10.019 million tonnes of e-waste every year.

According to Mostafa Jabbar, former president of Bangladesh Computer Samity, more than 500,000 personal computers are imported in the country every year.

“Basically there is no policy. I have repeatedly written about the issue but no one has paid any heed,” he said.

“At present, a total of 120 million mobile phone SIM cards are active in the country. Which means there are at least 50 million mobile phone sets. Each of these sets have their own batteries and chargers. Just imagine how hazardous they can be if the unused ones are not dumped properly. These alone are enough to cause a massive environmental disaster, even if we do not consider the wastes generated from personal computers,” he said.

It found that the developed nations dump e-waste in the “developing” Asian countries such as India, Bangladesh, China and Pakistan through illegal trade routes. Some of the electronic waste is reused, broken down for parts or thrown away completely.

Interestingly, the institutions are also in the dark about the threat of e-wastes. A staggering 81% of the surveyed institutions think that there is no problem associated with e-waste. Only 12% institutions know about the environmental pollution caused by e-wastes.

The study shows that much of the recycling are done informally, at homes where women and children are engaged in unsafe practices without having any knowledge about exposure-minimising technologies and protective equipment.

Computer wastes that are dumped in landfills, produce contaminated “lactates” which pollute groundwater. Burning of e-wastes can emit toxic fumes and gases, polluting the air. Because there are many rivers in Bangladesh, pollutants may reach underground via river water and rainwater.

“The more dangerous thing is that these electronic wastes are being dumped alongside the regular household wastes. The level of risk is extremely high. Every country has their own e-waste recycling mechanisms except Bangladesh,” Mostafa Jabbar said.

According to the study, some of the very common diseases caused by e-wastes are: high blood pressure, fragility of bones, lung damage and mental illness.

Children are especially vulnerable to the health risks and therefore need specific protection. Exposure to toxic substances may cause irreversible damage to their developing central nervous system, immunity, reproductive and digestive systems and hamper further development.

“As electronic wastes are not biodegradable, they are very dangerous to health, especially for children and pregnant women. Children can even die from over-exposure. For adults, there are long-term effects. People can have cancer, kidney problems and other deadly diseases from exposure to e-wastes,” Mustak Hossain, chief scientific officer of the Institute of Epidemiology, Diseases Control and Research (IEDCR), told the Dhaka Tribune.

The Esdo study report said most of the generated and imported e-wastes are collected and disintegrated in the backyards of the non-formal recyclers that do not follow any safety measure.

Some 23% people throw away damaged electrical equipment and 77% dispose their wastes in the municipal bin, where e-wastes are not managed properly.

Around 42% of the surveyed institutions do not take any step to minimise e-waste, 28% have no idea about the minimisation process, 20% sell it to vendors and 10% sell their e-wastes to repair shops.

“E-waste is not categorised as a waste. Although the issues is very alarming, it is yet to be addressed. That is why we do not have any e-waste management mechanism,” Bipon Kumar Saha, chief waste management officer of Dhaka North City Corporation, told the Dhaka Tribune.

“It has become a major concern as more or less every house has television and mobile sets, refrigerators, microwave ovens and other home appliances. These are dumped along with other household wastes,” Bipon said.