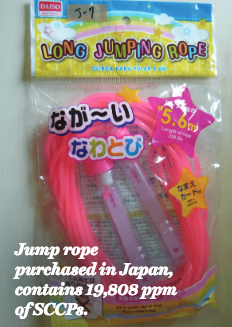 (Göteborg, Sweden) The EU is advocating for hazardous waste limits under two UN treaties that could allow significant releases of a globally-banned chemical contaminate new products made of recycled plastic, and result in waste dumping in developing countries. Basel OEWG11 will tackle the issue 3 – 7 September in Geneva. The chemical is SCCPs (short chain chlorinated paraffins) – banned globally under the Stockholm Convention in 2017, joining the list of the world’s worst chemicals. SCCPs are toxic to aquatic organisms, disrupt endocrine function, and are suspected to cause cancer in humans. They are used as a lubricant in metal cutting and as a flame retardant in plastics.

The Basel and Stockholm Conventions work together to develop a hazardous waste limit known as the “low POPs content” which defines the level at which wastes must be treated according to stringent Stockholm Convention obligations to destroy their POP content. Waste contaminated with SCCPs at levels lower than the threshold are effectively considered ‘clean’ and could be recycled or shipped to other countries. Most POPs currently in the Stockholm Convention have a waste limit of 50 ppm – but the EU is proposing 10,000 ppm for SCCPs – the weakest hazardous waste limit in the history of the Stockholm and Basel Conventions. Under the EU proposal, wastes with high levels of SCCPs but less than 10,000 ppm could be dumped in developing countries. At home, plastics on the EU market with less than 10,000 ppm SCCPs could be recycled into new consumer products, continuing the cycle of exposure.

An IPEN survey in 2017 revealed the presence of SCCPs in children’s products in the EU and other regions of the world. Consumer products on the EU market with SCCPs included wall paper (56.6 ppm), a gym ball for children (9715 ppm), and a ball for children with figures from the movie, “Frozen” (102 ppm). Under the EU’s weak proposal, all of these products could be recycled into new products containing SCCPs.

“The EU proposal undermines the integrity of the Basel and Stockholm Conventions and it is ironic that it actually comes from the EU’s own domestic legislation,” said Lee Bell, IPEN Advisor. “Instead of placing its own residents at risk with a weak policy and then trying to globalize it, the EU should use the international process to provide greater protection at home – and for the rest of the world.”

“The EU’s proposal would poison the circular economy with children’s products containing a toxic industrial chemical,” said Pamela Miller, IPEN Co-Chair. “This concerns me because I grew up near a major SCCPs manufacturer that turned the surrounding community into a cancer cluster. Nothing should persuade governments to quietly allow poisons to be slipped into children’s toys.”

“Africa does not need more of the EU’s toxic waste,” said Dr. Tadesse Amera, IPEN Co-Chair. “We need protective limits that stop harm instead of shipping it somewhere else.”