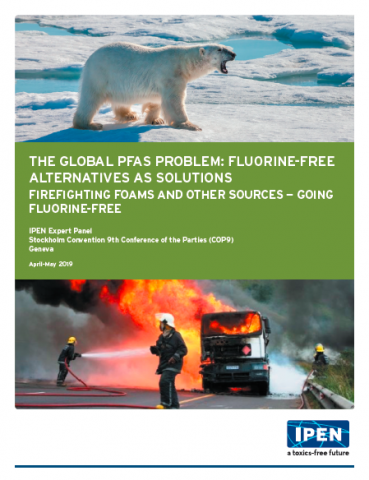 (Göteborg, Sweden): Industry fire-safety experts from the oil and gas and aviation sectors are joining with firefighter trade unions to urge governments to protect human health and the environment with a global ban on the toxic chemical, PFOA, and to reject loopholes for its use in firefighting foams. The use of PFOA and other fluorinated organic compounds (PFAS) is widespread across many industrial and domestic applications including textiles, food packaging, stain and oil resistant treatments, and industrial processes. Fluorinated firefighting foam is a leading cause of water contamination with toxic chemicals that are associated with cancer, endocrine disruption, and harm to fetal development.

The upcoming 9th Conference of the Parties to the Stockholm Convention on Persistent Organic Pollutants is scheduled to address a global ban on PFOA as the UN meeting commences next week (April 29-May 10). A key issue will be whether an exemption should be granted for continued PFOA use in firefighting foams. Industry fire-safety experts assert that no exemption is needed because cost-effective fluorine-free alternatives work as well or better than PFOA- and other PFAS-containing foams. Unlike PFAS-containing foams, fluorine-free alternatives do not cause long-term harm to human health and the environment or incur the extremely high cleanup costs of PFAS-containing foams.

The Stockholm Convention's scientific expert body recommended global elimination of PFOA due to its toxicity, persistence, bioaccumulation in the food chain, and ability to travel long distances. They also recommended strengthening the listing of PFOS in the treaty by closing a large number of loopholes. Since PFOA and PFOS have been used in firefighting foams, the expert body addressed alternatives to them, warning  against using the entire class of PFAS substances in firefighting foams, "due to their persistence and mobility, as well as their potential negative environmental, human health and socioeconomic impacts." (POPRC-14/2)

In their new report, the fire safety experts demonstrate that PFAS alternatives to PFOA and PFOS are similarly toxic and even harder to control, leading to increased pollution, exposure, and presence in the food chain. In contrast, world-class airports and major companies have thrown their weight behind fluorine-free firefighting foams.

All of the 27 major Australian airports have transitioned to fluorine-free firefighting foams, as have the following major hub airports: Dubai, Dortmund, Stuttgart, London Heathrow, Gatwick, Edinburgh, Manchester, London City, Leeds-Bradford, Copenhagen, and Auckland, and elsewhere in Europe such as Billund, Guernsey, Bristol, Blackpool, and Köln-Bonn.

Kim T. Olsen, Head of Copenhagen Airport Rescue and Firefighting Academy, noted that Copenhagen Airport is still working on the clean-up and remediation of PFAS contamination from fluorinated (AFFF) firefighting foams and stated that, “Fluorine-free foam is the future. I see no reason to keep on polluting the environment with AFFF types of foam when the fluorine-free foam is just as efficient.”

Lars Ystanes, Environmental Specialist at Equinor (formerly Statoil) noted that, "We can remove a polluting chemical from use without compromising safety and at reasonable cost… [At Equinor] We have investigated and verified all aspects of the fluorine-free foam used, RF1-AG, with respect to operational firefighting efficiency, health, and safety, freeze protection, aging, etc. We regard the new fluorine-free foam as a fully acceptable and even better replacement for AFFF."

Nigel Holmes, a government regulator with the Department of Science and the Environment in Queensland Australia called out the fluorine chemical industry stating, "A significant failure by the fluorochemicals industry and those using their chemicals in products has been to neglect to meet their international obligations under the Precautionary Principle – one of the tenets at the heart of the Stockholm Convention and a major test of the need for concern and action on persistent organic pollutants. "

A recent PFAS study of a large cohort of Australian firefighters found significant elevations of PFAS blood levels, far in excess of the general population in Australia. The study underscores the urgent need for action to protect human health. Commander Mick Tisbury, President of the United Firefighters Union of Australia, and Commander of the Melbourne Metropolitan Fire Brigade (MFB) commented, "Melbourne Metropolitan Fire Brigade transitioned to non-persistent, fluorine-free firefighting foam in 2014, after extensive testing on live fire scenarios. Since then, every B Class fire that MFB has responded to have been extinguished with fluorine-free foam. Recently there has been misleading information circulated by various people with vested interests, regarding the effectiveness of fluorine-free foam (F3) on flammable liquid fires. Based on MFB's experience, Solberg RF3x6 foam concentrate has performed just as well as our previous fluorinated AFFF concentrate."

“Governments should listen carefully to industry fire safety professionals and firefighters who actually put out fires, not the polluting fluorine chemical industry who is lobbying for loopholes to continue selling their toxic products,” said Pamela Miller, a convener of the expert group and Co-Chair of IPEN. “Water is a precious resource and clean water a fundamental human right, now is the time to fulfill the Stockholm Convention’s protective objective and stop polluting it.”

Reporters and Editors, please contact LauraVyda@ipen.org for additional information and to arrange interviews with industry experts and authors of the report.