A Global Response to the Global Plastic Crisis

We are overwhelmed by plastic pollution. This is the last call to save the planet.

Marine plastic pollution is now under the magnifying glass of a group of experts tasked with recommending a global response to the plastics crisis. Here’s what to expect at their meeting next week.

Indeed, between 5 and 13 million tons of virgin plastic are contaminating our oceans each year. (In total, an estimated 8,300 million tons of virgin plastics have been produced to date.) But despite growing attention to the issue, plastic production is expected to grow by 33% by 2025, with dramatic consequences for human health and the environment.

So far, many fragmented initiatives have been promoted to address marine plastic pollution, but a lack of coordination and legally binding commitments have undermined their effectiveness. To truly address the problem of plastic pollution, we have to start at its source — fossil fuels — and address plastic throughout its entire lifecycle. Clearly, there are no easy solutions for addressing the plastic pollution crisis. That’s why we must act now to reduce, reuse, and redesign plastics at the global level.

How is the global community addressing the plastic pollution crisis?

The UN Environment Assembly (UNEA) — the highest political forum on environmental matters, involving all 193 member states of the United Nations — has set into motion discussions on how the world will tackle plastic pollution. In December 2017, UNEA established a group of experts to present options for combating marine plastic litter and microplastics. Among other things, this group is tasked with identifying ways to address the plastic problem and determining how feasible and effective those different options will be.

What will the Expert Group work on next week?

Building on the outcomes of its first meeting in May, the Expert Group will meet in Geneva, Switzerland, on December 3-7 to provide concrete recommendations for addressing legal, financial, and technological barriers to combating marine plastic litter and microplastics from all sources. The group of experts, with representatives from member States, international and regional conventions, NGOs, and other relevant stakeholders, is tasked with identifying a wide array of options for tackling plastic pollution as a global community.

Why a new global convention on plastic pollution is needed

None of the 18 international environmental agreements or 36 regional environmental agreements are primarily tailored to address marine plastic pollution, according to a UNEP assessment. Because of the urgency and complexity of the plastics crisis a new, a comprehensive treaty is needed to adequately and effectively address plastic pollution in addition to implementing other conventions and develop shorter term national and regional initiatives.

For this reason, the Expert Group is expected to adopt a shared vision on this issue and may include a request to UNEA for further commitment to pursuing a treaty. CIEL will be at the meeting, coordinating a global civil society task force composed of experts, academics, and other NGOs to push the process towards a new convention on plastic pollution.

Four pillars for a convention on plastic pollution

CIEL and our partners have developed a thought starter on what such a convention should cover and what it could look like. In that respect, it is critical to consider the full impact of plastics, beyond just marine waste. Plastics and microplastics have been found not just in our oceans, but also in our freshwater, soil, and air. In fact, they disperse and accumulate much faster in soil and freshwater environments than in the ocean, having deep impacts on human health.

CIEL and our partners propose an international convention based on four pillars: 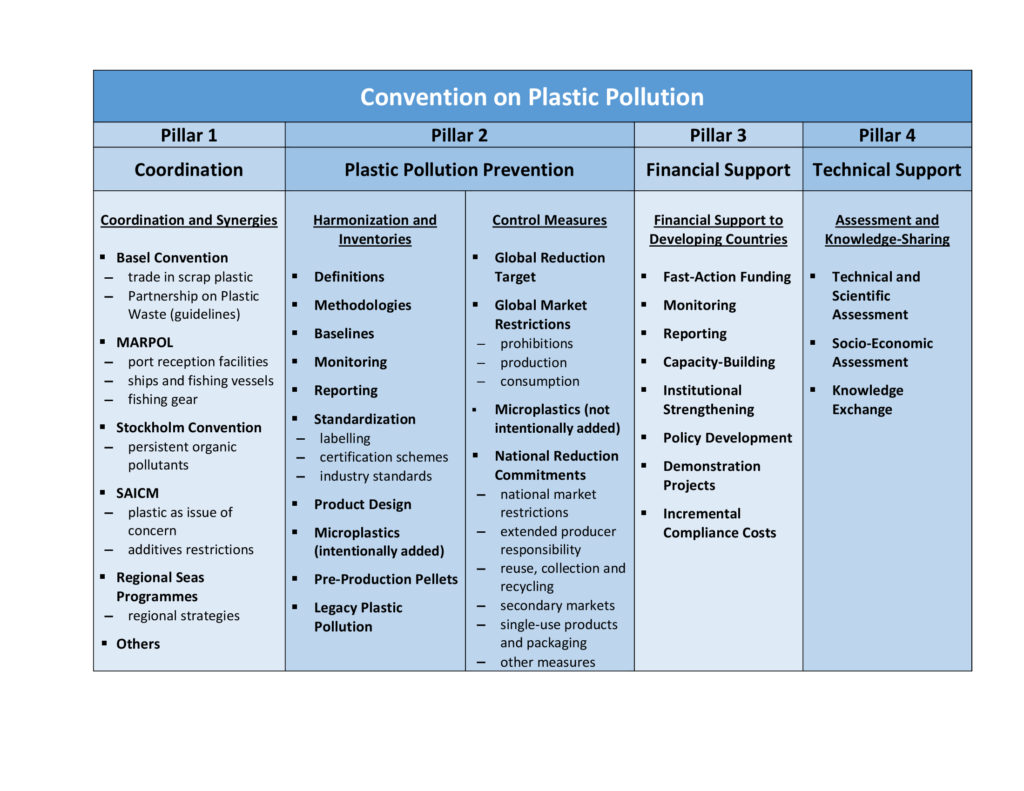 More than 90 organizations have already joined us in asking UNEA4 to advance the process for a future free from plastic pollution. We want to give a strong signal to delegates that there is massive support to address the roots of plastic pollution. If you are an organization interested in signing on, click here to join us!