IPEN at the Plastics Treaty INC-1 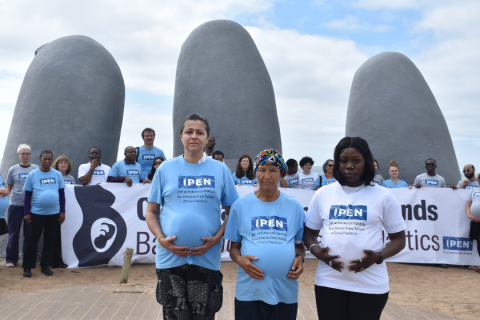 Advancing the Importance of Chemicals and Health
13 December 2022

The Plastics Treaty’s first Intergovernmental Negotiating Committee (INC-1) met in Punta del Este, Uruguay from November 28 through December 2, 2022. IPEN ensured that voices from all regions in the global south were present in the meeting by supporting in-person participation by nearly 30 public interest participating organizations, and coordinated over 45 IPEN NGO members, working collaboratively to advance our views and promote the adoption of a Treaty that accounts for the threats to human health and the environment from chemicals in plastics.

IPEN created several resources for delegates and others to educate them on the health threats from chemicals in plastics and to address solutions via a Plastics Treaty. Our new report “An Introduction To Plastics & Toxic Chemicals: How Plastics Harm Human Health And The Environment And Poison The Circular Economy” provides background on plastics as materials that pose threats to human health and includes a foreword by scientists who co-authored the recent studies showing that plastics and chemical production may have already exceeded the “planetary boundaries.” Our briefing for delegates on “Enhancing Controls to Protect Human Health from Plastics" describes how health and chemicals are relevant to the Treaty and how the Treaty should address these issues.

One of  IPEN’s main objectives for INC-1 was to educate delegates on the importance of developing a treaty that addresses these health threats. In March, at the UN meeting that adopted the mandate for a Plastics Treaty, very few governments mentioned chemicals or health. But seven months later, at the INC-1, over 60 countries formally raised the chemicals and health issues. Moreover, the government-ledHigh Ambition Coalition, currently with over 45 countries signed on, also now clearly states the need to address toxic chemicals in plastics.

Media reports also highlighted the shifting narrative: in the Associated Press, IPEN Global Co-chair Tadesse Amera said [Plastic is] not a waste management issue. It’s a chemical issue and a health issue, human health and also biodiversity,” and in Reuters, IPEN policy advisor Vito Buonsante said, "Plastics are not anymore being seen as just a marine litter issue. People are discussing plastic as a material made of chemicals. There has been a narrative shift.”

At the oputset of the INC-1,  IPEN established a high-profile, welcoming delegates with a banner urging, “Our Health is in Your Hands - Ban Toxic Chemicals in Plastics.” In addition, the government of Uruguay invited and requested IPEN to develop a well-attendedinformation briefing for delegates on "Health, Chemicals, Plastics and a Non-Toxic Circular Economy." This event was formally co-hosted by the governments of Uruguay and Switzerland, and with the Endocrine Society.

Most critically, we worked to ensure that civil society, and especially our member groups from low- and middle-income countries would be heard during the week-long negotiations. We collaborated with the UN secretariat and with the office of the chair on the procedures for participation, leading to several IPEN plenary statements that highlighted the need for global controls on plastics, transparency and a strong scientific base for the implementation of the future treaty. We also took part in two panels organized in the context of a Multi-Stakeholders Forum, with IPEN members from the Philippines and Indonesia highlighting how the promise of recycling plastics leads to disproportionate toxic impacts on communities in their countries.

The next session of the Plastics Treaty negotiations will take place in May 2023 in Paris, France where governments will start in depth discussions on how the Treaty will in practice address the health and environmental crises caused by plastic sourcing, production, use, and disposal. Crucial discussions will also start addressing the financial and technical resources needed to implement the treaty.

Since IPEN’s inception 25 years ago, we have been active participants in dozens of negotiations for other UN agreements, including the Stockholm and Minamata Conventions and the SAICM process. Building on our deep experience, in the Plastics Treaty negotiations IPEN is continuing to support our member groups as the leading voices for civil society from the global south, to provide credible scientific information to delegates, and to advance to the negotiations the scientific and advocacy work that IPEN participating organizations generate in their countries.

There is much work ahead for IPEN on plastics, chemicals and health. Some Treaty participants still view recycling as an important solution and fail to address how recycling passes on toxic chemicals and  their health consequences, particularly on vulnerable people. Recycling also raises a false dilemma between the livelihood of people employed in the recycling sector, and the transition to materials that are durable, safer, and free of chemicals linked to a wide range of health problems. Transitioning to an economy where all resources are used more efficiently will not only benefit the environment and human health but also increase the economic opportunities for workers that are sorting, classifying, and recycling all materials, including plastics. IPEN will work to establish the goal of a non-toxic circular economy as an objective of the Treaty (at least three countries and one region have included this phrase in their plenary statements). IPEN will also continue to generate data from our global network, support the work of our members in the global south, and expand our collaborations with waste pickers, who sort most of the plastic waste around the globe and are most vulnerable to plastics’ chemical impacts.