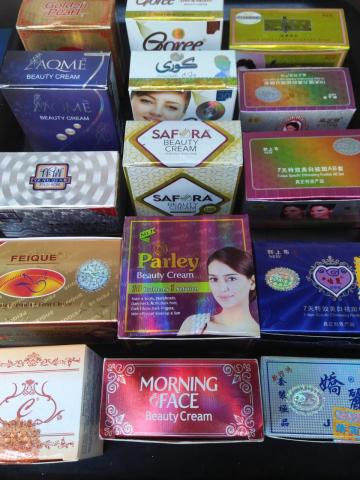 Quezon City, Philippines Mercury in cosmetics remains a serious threat to human health and the environment 14 years after the ASEAN regional bloc decided to ban it in cosmetic product formulations.

The toxics watchdog group EcoWaste Coalition made this observation after analyzing 15 imported skin lightening products that are sold in the country without authorization from the Food and Drug Administration (FDA).

“We did our latest test purchase to draw attention to the urgency of effectively enforcing the mercury ban in cosmetics in the ASEAN region and across the world,” said Thony Dizon, Chemical Safety Campaigner, EcoWaste Coalition, who noted the 2020 phase-out deadline under the Minamata Convention on Mercury for cosmetics such as skin lightening creams and soaps with mercury content above 1 ppm.

“Despite the global ban on their manufacture, import or export, unscrupulous traders continue to bring in mercury-containing whitening and anti-aging creams from abroad, especially from China and Pakistan, which are also sold in online shopping platforms,” he lamented.

After procuring the 15 cosmetic products for P100 to P250 each last December 8 from retailers in Manila, Parañaque and Pasay Cities, the EcoWaste Coalition screened the items for mercury using an advanced Olympus Vanta M Series X-Ray Fluorescence (XRF) analyzer, a handheld device that can provide accurate, non-destructive and rapid element analysis.

Based on the XRF screening performed on December 9, all 15 cosmetic products were found to contain excessive levels of mercury beyond the 1 ppm limit set by the ASEAN Cosmetic Directive and the Minamata Convention on Mercury.

As part of its non-stop advocacy, the EcoWaste Coalition shared via its Facebook and Twitter accounts infographics informing consumers about the hazards of mercury in cosmetics to public health and the environment, as highlighted in the infographics, mercury in skin lightening cosmetics damages the kidneys, causes skin rashes, skin discoloration and scarring, and reduces skin’s resistance to bacterial and fungal infections. Mercury in cosmetics is eventually discharged into wastewater, contributing to mercury pollution in the aquatic systems. Mercury is likewise released into the environment when containers of mercury-containing cosmetics are disposed of, mixed with ordinary trash, landfilled or incinerated.

As it urges concerned health, customs, local government and police authorities to put the ban on mercury in cosmetics in force, the EcoWaste Coalition, as stated in the infographics, has this three-point message to consumers:

From 2010-2021, the FDA has banned over 140 brands of skin whitening cosmetics for containing mercury and/or for lacking the required market authorization, including over 85 items discovered by the EcoWaste Coalition through its periodic market surveillance and chemical screening activities since 2011.