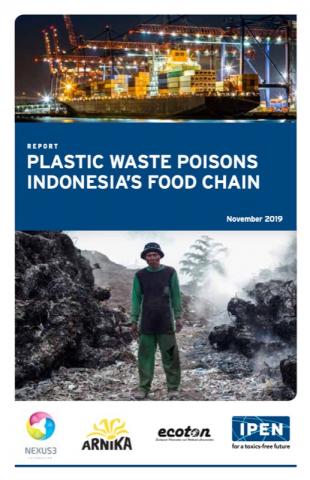 Gothenburg, Sweden Highly toxic chemicals, posing dire risks to human health, have been found in dangerous concentrations in free-range chicken eggs in Indonesian communities where plastic waste accumulates. Among the alarming findings were high levels of dioxins in eggs collected near an Indonesian factory that burns plastics for fuel. The high dioxin concentrations are similar to levels in eggs collected near the Agent Orange hotspot in Bien Hoa, Vietnam, considered one of the most dioxin-contaminated locations on earth. The study is the first to demonstrate food chain contamination in Southeast Asia with high levels of hazardous chemicals as a consequence of waste mismanagement and plastic waste imports.

In “Plastic Waste Poisons Indonesia’s Food Chain,” researchers from the global environmental health and policy network IPEN, along with Arnika Association and Indonesian NGOs Nexus 3 and Ecoton, describe the collection and analysis of free-range chicken eggs in the communities of Bangun and Tropodo in East Java. Imported plastic waste has inundated these communities since China closed its doors to the world’s plastic waste in 2018. Indonesia's plastic waste import volume doubled between 2017 and 2018, according to UN Comtrade data. In Bangun, residents burn the piles of plastic waste to reduce the sheer volume of trash clogging streets and piling up around houses. In Tropodo, the plastic waste is used to fuel local tofu factories.

Numerous studies have linked the chemicals found in the eggs with a host of health impacts. Dioxin exposure is linked to a variety of serious illnesses in humans, including cardiovascular disease, cancer, diabetes, and endometriosis. Flame retardant chemicals, SCCPs and PBDEs disrupt endocrine function and negatively affect reproductive health. PFOS causes reproductive and immune system damage, and internal company documents indicate that manufacturers knew about its toxicity for decades, but continued manufacturing it.

Plastic scrap is entering Indonesia through recycling imports, including paper scrap shipments. One and a half million tons of imported paper scrap are used by paper recyclers as feedstock for new paper in Indonesia each year. In the last three years, the amount of plastic scrap inside paper recycling bundles imported into Indonesia skyrocketed from 2-10% to 60-70%, indicating that paper scrap is being used to conceal plastic waste dumping. The shipments are imported primarily from Australia, Canada, Ireland, Italy, New Zealand, UK, and the US. Bangun and Tropodo are among the impacted villages that are located near the paper companies. They receive more than 50 tons of low-grade plastic every day.

“Plastic waste is a serious toxic chemical pollution problem,” said Yuyun Ismawati, co-founder and Senior Advisor of Nexus3 (Indonesia), and Goldman Environmental Prize awardee for pollution and waste. “Our results should ring alarm bells in every community trying to deal with a tsunami of plastic waste. The Global North needs to stop treating the Global South as its waste bin.”

The chemical and policy experts involved in the study concur that the emerging environmental health catastrophe revealed in the report calls for a complete ban on plastic waste combustion, rigorous control of imports and stronger regulation nationally and through the global chemicals and waste policies of the Stockholm and Basel Conventions.

“These stark findings illustrate the dangers of plastics for human health and should move policy makers to ban plastic waste combustion, address environmental contamination, and rigorously control imports,” said report co-author Lee Bell, IPEN Advisor and member of the Stockholm BAT BEP and Dioxin expert group. “It’s clear from the study that plastic pollution imperils human and environmental health not only from the visible deluge of plastic trash, but from the invisible chemical contaminants in plastics and those created when burning plastics.”

“This study pulls back the curtain on how plastic waste carries toxic chemicals into the food chain,” said report author Jindrich Petrlik, Arnika Association. “Reducing plastics production and the toxicity of plastic materials is really the only option for a toxics-free future.”

“Our communities that are being choked by plastic are being poisoned by it, too,” said Prigi Arisandi, Director of Ecoton, Indonesia, and winner of the Goldman Environmental Prize. “Plastic waste dumping needs to end everywhere. Otherwise we will see the same polluting nations find ways to dump their plastic waste on poor communities in other countries.”

Editors and journalists, please contact media@ipen.org to arrange interviews with the report authors and for additional information.