Press Release: No Loopholes in Global Ban on PFOA 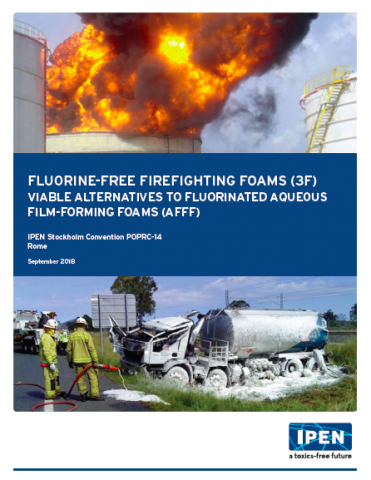 (Göteborg, Sweden): PFOA, the “Teflon chemical,” the cause of vast contamination of ground and drinking water around the world, is a persistent pollutant and suspected carcinogen. PFOA was nominated in 2015 for a global ban under the UN Stockholm Convention on Persistent Organic Pollutants. An upcoming UN expert group meeting will make recommendations to governments about adding PFOA to the treaty, including possible loopholes that would continue production and use. Experts across diverse fields, including business, fire safety regulation, airport authorities, environmental science and medical device suppliers, strongly condemn proposed exemptions, arguing there is no justification for continued use when viable alternatives exist.

PFOA is one of the most ubiquitous and well-studied substances in the large class of fluorinated chemicals known as PFAS. PFOA has been used to make non-stick pans, and is found in textiles, fire-fighting foams, and medical devices, and is used in many other products and processes. In 2017, the Stockholm Convention expert group noted the link between PFOA and serious illnesses in humans, including diagnosed high cholesterol, ulcerative colitis, thyroid disease, testicular cancer, kidney cancer and pregnancy-induced hypertension. Recently obtained documents indicate that manufacturers knew about the harmful characteristics of PFAS substances decades ago.

PFOA has contaminated the global environment, including wildlife and people of remote regions such as the Arctic and Antarctic. The U.S. CDC’s Director for the National Centre for Environmental Health, Patrick Breysse, estimates that 10 million people in the U.S. are drinking PFAS-contaminated water and called PFAS pollution “one of the most seminal public health challenge for the next decades.” Recent studies indicate that exposure limits of the allowable amounts of PFOA in drinking water are insufficient to “protect children and other vulnerable groups against adverse effects on the human immune system.” In June 2018, the U.S. Agency for Toxic Substances and Disease Registry (ATSDR) proposed sharply lowering PFAS exposure limits after other government agencies tried to suppress the proposal.

PFAS manufacturing and use of firefighting foams containing PFOA, PFOS and other fluorinated chemicals (called AFFF) used at military bases and airports are responsible for water pollution and contaminated communities in many countries, including Australia, Canada, China, Germany, Italy, Japan, Netherlands, New Zealand, South Korea, Sweden, and the U.S., including a large number of military bases that contribute to 172 PFAS contamination sites in 40 states. U.S. government agencies note that “most people in the United States have been exposed to PFAS and have PFAS in their blood…” The slippery chemicals rapidly enter soil and ground water, creating difficult and extremely expensive clean up. That safer alternatives are used successfully around the world, say experts, is the strongest evidence to deny exemptions to the global ban.

Safe and effective fluorine-free firefighting foams are used in some of the world’s largest airports, including London Heathrow, London Gatwick, Copenhagen, Stuttgart and Dubai, amongst others. All 27 of Australia’s airports have been using fluorine-free foams for many years. Fire safety and regulatory experts say there are no justifications for continued use of toxic foams given this successful, widespread use of the environmentally safe alternative.

IPEN has produced a comprehensive report featuring eminent, independent experts across the fire engineering industry (with experience covering large airports), the aviation rescue and firefighting sector, the oil, gas and petrochemical industries (including emergency disaster control), and foam developers and formulation chemists who all speak to the need to prevent exemptions. Trade associations involved in independent product testing and holistic assessment of risk, specialists in environmental chemistry, and national environmental regulatory bodies are also included in the report and agree that it is vital to prevent exemptions.

“Fluorine-free firefighting (F3) foams are viable alternatives to fluorinated AFFF and comparable by all measures. But unlike fluorinated foams, F3 foams don’t pollute the environment permanently, or put human or animal health at risk; there is no expensive clean up; remediation costs are negligible or zero; and there are no significant legal and financial liabilities. Public health values such as clean drinking water are not compromised, and, finally, there is no erosion of public confidence in political institutions and government agencies,” points out the report from the IPEN panel of experts. The report, edited and coordinated by Dr. Roger Klein, research physical chemist and medical scientist with many years of experience in advising fire departments internationally, and currently affiliated research faculty at the Christian Regenhard Center for Emergency Response Studies (John Jay College of Criminal Justice, CUNY, New York), clearly states, “There is no good reason to grant an exemption” for the use of fluorinated firefighting foams given the availability of highly effective non-fluorinated alternatives.

Heathrow Airport Fire Service Compliance Manager Graeme Day said, “We’ve seen that neither firefighter nor passenger safety has been compromised with use of fluorine-free foams and that we have a product that not only meets our operational and environmental responsibilities but can also be used for training. Runways become operational more quickly and there are zero clean-up costs.” Avoidance of clean-up costs is a considerable economic concern when fluorinated foam pollution clean-up is estimated to cost approximately $3.5 – 5.5 million euros per site.

“The continued use of PFAS foams is not only unnecessary, but would continue to add to the legacy and on-going contamination that is responsible for the substantial, widespread health and environmental harm and sky-rocketing costs. There is no justification to perpetuate such harm and protective action is a moral imperative,” says Pamela Miller, an editor of the report and Co-Chair of the IPEN global network. “The industry’s new regrettable fluorinated substitutes appear to do as much or more harm and their use must also be halted.”

No Exemptions for Medical Devices

Exemptions are also being sought for numerous other uses by a variety of industry associations, including a loophole that would- ironically -permit continued use of PFOA in health care. However, a robust market exists for health care products that do not use or contain PFOA. For example, Greenhealth Exchange is one such medical supplier that conducts $4 billion USD a year in business, supplying products to more than 100 hospitals in the U.S.  In their letter to the Stockholm Convention expert committee, Greenhealth Exchange notes the special responsibility of the health care industry to set a positive example and requests that PFOA be recommended for global elimination without exemptions.

“Usually the only voices that get heard when a toxic substance is about to be banned are its producers and users, who aggressively move to protect sales,” said Joe DiGangi, IPEN Sr. Science and Technical Advisor. “Policymakers and expert group members need to pay attention to public health concerns and business interests that stand to benefit from a ban. PFOA is one of the world’s worst chemicals and it needs to join the Stockholm Convention list for global elimination without exemptions punching holes in its protective provisions.”

For additional information, to receive background FAQs on industry exemptions to the PFOA ban being sought and a guide to IPEN positions for the meeting, and for contacts for interviews, please contact  LauraVyda@IPEN.org 1 510 387-1739.