Thailand Passes Strict Ban on the Importation of Electronic Waste 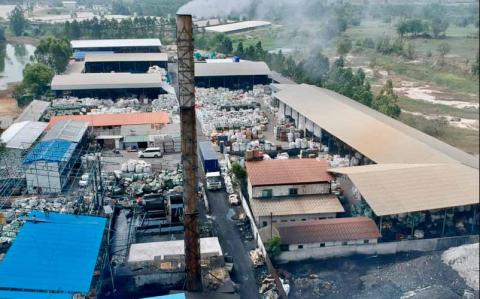 Drone view of Thai "dioxin factory" where circuit boards and wires are burned in a giant smelter. Toxic smoke belches from the stack, while ash piles are visible in foreground, and imported electronic equipment seen in the background. Photo Basel Action Network (BAN).

Bangkok, Thailand and Seattle, WA, USA October 6, 2020. Following repeated revelations of the dumping of electronic wastes, from countries such as the US, Japan, and Australia, the Thai government has finally passed a full prohibition on the import of such hazardous wastes into Thailand. Environmental groups that had been calling for such a ban for several years applauded the move but now call for vigorous enforcement of the law, the addition of plastic wastes and the ratification by Thailand of the Basel Convention's Ban Amendment. Further they urge all other countries in the region to do likewise.

We are very happy to see this law finally in force in Thailand but we remind the world that Thailand is still seen as the dumping ground for plastic and other wastes by brokers in Hong Kong and the US," said Mr. Akarapon Teebthaisong of Ecological Alert and Recovery Thailand (EARTH). "Further, we must remain vigilant against actors that will ignore this new law, both inside and outside of the country."

Following China's National Sword policy to forbid imports of electronic and plastic wastes into the country, many traders simply moved highly polluting waste operations to Hong Kong, or South and Southeast Asian and South Asian countries such as Thailand, Indonesia, Pakistan, India and Malaysia. The Basel Action Network (BAN) an NGO fighting global waste dumping, which for years tracked the waste exports to China, used GPS trackers to monitor the most recent flows of waste across the globe. In February of 2018 they found numerous exports ending up in Thailand including one from Germany and one from Australia and reported the findings to the Thai government and to the EARTH organization.

In May of 2018, the Thai government conducted the first of several high-profile raids on these companies but it was not until last month that the prohibition announced at that time became official with 428 different types of electronic scrap listed as forbidden to import into the country, in a Notification of Ministry of Commerce of the new law effective 15 September 2020.

Earlier last year, on December 5th 2019, a global ban on the export of hazardous waste from developed to developing countries entered into force. To date 99 countries have ratified that agreement but Thailand, Australia, Japan, and the US have not ratified the agreement. Further, on January 1, 2021, new Basel amendments will require that the trade in mixed and dirty plastic wastes be strictly regulated or prohibited.

"To avoid their territories being exploited by global waste dumpers, it is vital that countries in Asia, Latin America and Africa prohibit all manner of plastic and hazardous wastes as China has done," said Basel Action Network (BAN) Director Jim Puckett. "Once your country and countryside becomes a target of the global waste traders it is too late to prevent the destruction they can cause, of ground water, to air quality, and the local food supply."