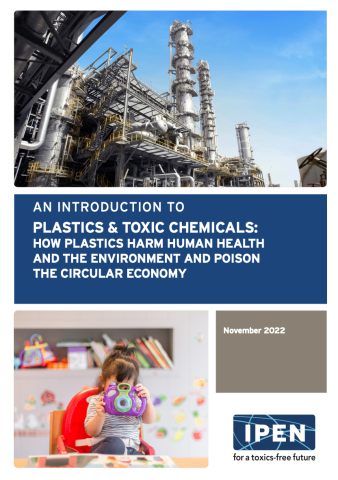 Ahead of the Plastics Treaty negotiations, a new guide informs delegates on the health and environmental risks from chemicals in plastics
21 November 2022

See IPEN's Quick Views and other resources for the Plastics Treaty INC-1 here.

As delegates plan to travel to Punta del Este, Uruguay for the first Intergovernmental Negotiating Committee (INC-1) meetings of the Plastics Treaty beginning later this month, a new report from IPEN outlines the importance of establishing a treaty to protect human health and the environment from toxic chemicals throughout the plastics lifecycle. As the report “An Introduction to Plastics and Toxic Chemicals” notes, “The health and environmental impacts of plastics are a global crisis… Plastics transport chemicals into every nook and cranny of the world – they bring toxic chemicals into our homes and ultimately into our bodies.”

Founded in 1998 to contribute to the negotiations of the Stockholm Convention, IPEN has contributed over nearly 25 years to all of the major international instruments on chemicals and waste. “The Plastics Treaty will be a critical agreement toward ending the plastics production crisis and promoting innovations for safer materials and a truly sustainable, circular economy,” said Tadesse Amera of Ethiopia, IPEN’s Co-chair and a public interest participant at the Treaty negotiations. “We urge delegates to consider that, for Africa and other regions where plastic wastes from wealthy countries are often discarded, plastics pollute our air, food, and water, posing daily health threats. That’s why it is urgent to adopt rules for reducing plastics production and ending waste dumping.”

IPEN leaders from more than 40 participating organizations in mostly low- and middle-income countries are expected to join the Plastics Treaty meetings in Uruguay. IPEN’s views and recommendations on several key issues for the negotiations are available here. Original data from IPEN studies and research, briefs and factsheets on threats from plastics, and other background information are also available on the IPEN website.

“It is very appropriate that the Plastics Treaty negotiations will be held in Uruguay, as we face serious health issues from uncontrolled plastic wastes,” said María Isabel Cárcamo, coordinator of the local nonprofit RAP-AL Uruguay, an IPEN Participating Organization. “It is critical for delegates to understand that toxic chemicals pose threats to our health and the environment throughout the plastics lifecycle. Especially in Latin America, Africa, and Asia, the Treaty must protect communities from plastic dumping that threatens the human right to healthy environments.”

The report includes a preface by Bethanie Carney Almroth, Patricia Villarubia-Gómez, and Zhanyun Wang, who are co-authors of the recent publication calling plastics and chemical production a planetary boundaries crisis. In the preface they state, “The response [to the plastics crisis] should be global and cohesive, with careful consideration of equity, justice and human rights. We are confident that this report by IPEN plays a key role in raising the much-needed awareness around these issues.”

“Plastics are a complex groups of materials made with thousands of chemicals. Right now we have no real, safe and scalable means of managing waste and preventing plastics from entering into the environment, and even into our own bodies. Despite promises, recycling schemes have largely failed; the circular economy does not yet exist. Until we can ensure safe reuse or recycling of plastics, we need to reduce production and use of these materials and phase out use of toxic chemicals in order to protect human health and the environment,” said Dr. Bethanie Carney Almroth from the Department of Biological and Environmental Sciences at the University of Gothenburg in Göteborg, Sweden.

The IPEN report outlines the toxic threats from plastics throughout their  lifecycle and includes: