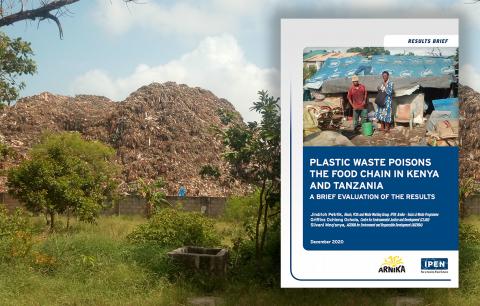 The study warned that long-term continuous exposure to even small amounts of the harmful dioxins — a group of chemicals — could result in cancers, diabetes, damage to immune and reproductive systems.

“Eating one egg with these levels is not necessarily harmful, the problem exists for people living and growing their food or rearing their animals in such toxic environments consistently,” explained co-chair of Dioxin, PCBs and Waste Working Group of IPEN, Jindrich Petrlik — who is also head of the programme, Toxics-free future Programme at Arnika.

The most commonly encountered POPs are polychlorinated biphenyls (PCBs), organochlorine pesticides, such as DDT, industrial chemicals, as well as unintentional by-products of many industrial processes, especially polychlorinated dibenzo-p-dioxins (PCDD) and dibenzofurans (PCDF), commonly known as dioxins.

At the plastic burner site in Kenya the results showed significant levels of what the Stockholm Convention on Persistent Organic Pollutants lists as very hazardous chemicals that included dioxins and hexabromocyclododecane (HBCD).

Eggs are an ideal matrix to generally monitor levels of POPs in the environment. Eggs also represent an important human exposure pathway through consumption, making them a relevant matrix for assessment of toxic burdens for POPs in our food chains.

Data from the studies shows that the dioxin levels in the eggs laid by hens foraging near the landfill in Dar es Salaam, were 26 picogram (pg) TEQ g-1 fat, while those sampled in Nairobi’s Mirema site were 12 pg TEQ g-1 fat.

A similar study done in Dandora landfill in 2004, found 27 pg TEQ g-1 fat in eggs in the total level of dioxins and PCBs. Toxic equivalency quantity (TEQ) is the weighted quantity measure based on the toxicity of each member of the dioxin category relative to the most toxic member of the category. The EU limit for dioxins in eggs is 2.5pg WHO-TEQ g-1 fat and for dioxins and dioxin-like PCBs it is 5.0pg WHO-TEQ g-1 fat.

The study used eggs to measure POPs in the environment because free-range chickens are “active samplers” of materials on the ground.

According to Centre for Environmental Justice and Development executive director, Griffins Ochieng Ochola, “More than 90 per cent of human exposure to POPs is through food."