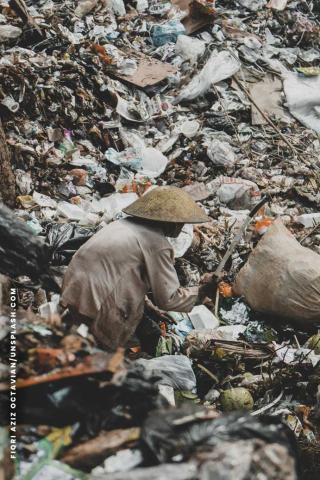 Materials such as plastic and e-waste contain a cocktail of chemicals that studies show can disturb the body’s natural hormones. As ever-higher volumes of trash continue to end up in landfills, primarily waste exported from Western countries to low- and middle-income countries, waste pickers will be on the front lines of what scientists are calling an emerging health issue of global concern. And women are especially at risk.

In this story from Vice World News in collaboration with the Fuller Project, IPEN science adviser Sara Brosche and IPENer Griffins Ochieng from CREPD comment on the impacts on women waste pickers from toxic chemicals.

Plastics and e-waste are known to contain and leach hazardous chemicals into the environment, including endocrine-disrupting chemicals (EDCs), which have been linked to reduced fertility, pregnancy loss and irregular menstrual cycles, among many other conditions. Burning them releases or generates a number of highly toxic chemicals and heavy metals, with reported similar effects. The toxins are not only in the air but also in the soil and water, and for the many waste pickers who eat from the landfills, in their food, too.

As Griffins Ochieng notes, “This is a global problem. Any dumpsite – anywhere there is plastic pollution – women will be impacted.” Since women waste pickers spend their entire day at dumpsites, he says, “They’re in the thick of things… but the environment is a threat to their health.”

Waste pickers, usually women, are often described as the backbone of waste and recycling industries. They’ve stepped in, an informal, often invisible workforce relied upon by governments in parts of Latin America and Asia and across Africa. Spending long days bent over, picking up and sorting waste discarded in streets and dumpsites, they recover more recyclable materials than formal waste management systems yet represent some of society’s most marginalized populations.

Unfortunately, the health issues related to waste pickers’ chemical exposures have not been well studied. Sara Brosché says, “The evidence is strong, but the connection between toxic chemicals and impacts on women hasn’t really been talked about that much. It’s such an important but overlooked issue.”

Read the full story from Vice World News at ‘The Smoke Enters Your Body’: A Toxic Trash Site in Kenya Is Making Women Sick (vice.com)