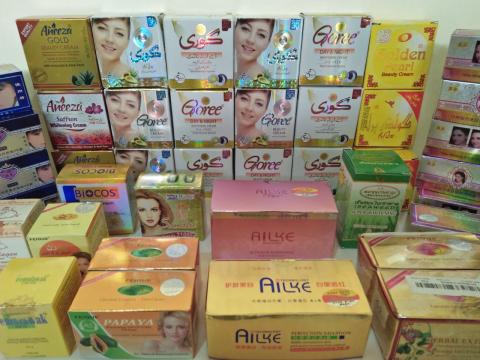 The advocacy group for a zero waste and toxics-free society launched the report “Toxic Exposé: Online Trade of Mercury-Containing Skin Whitening Cosmetics in the Philippines” ahead of the 3.3 (which is equivalent to March 3) online shopping bonanza by e-commerce giants Lazada and Shopee.

The group conducted the investigation to generate data that will help stem both the supply and demand for mercury-containing cosmetics and pro mote the implementation of the Minamata Convention on Mercury, which phased-out in 2020 cosmetics such as skin lightening creams and soaps with mercury above one part per million (ppm).

Of the 65 samples procured from online dealers and subsequently screened for mercury using an X-Ray Fluorescence (XRF) device, 40 were found to contain mercury above 1 ppm. Of these 40 samples, 38 had mercury in excess of 1,000 ppm, 25 with over 5,000 ppm, 19 with more than 15,000 ppm, and 5 were loaded with mercury above 25,000 ppm. None of the 65 samples are duly notified or registered with the Food and Drug Administration (FDA).

“The results of our investigation should push online shopping and social media sites to strictly disallow and monitor the use of their far-reaching platforms to advertise and sell adulterated, counterfeit and unauthorized cosmetics such as those with mercury content,” said Thony Dizon, Chemical Safety Campaigner, EcoWaste Coalition.

“To avoid being harmed by mercury in cosmetics, we appeal to all Filipinos to accept our natural skin color, refuse chemical whiteners, and resist color-based bias, prejudice and discrimination,” he emphasized.

“The recommendations arising from the study, we hope, will contribute to the active implementation of the National Action Plan for the Phase-Out of Mercury-Added Products and the Management of Associated Mercury-Containing Wastes,” Dizon added, “despite the understandable focus of the government and the society on addressing the threats of the COVID-19 pandemic to people’s health and the economy.” The said plan was adopted in 2019 with inputs from concerned stakeholders, including the EcoWaste Coalition.

Dr. Geminn Louis C. Apostol, Assistant Professor at the Ateneo School of Medicine and Public Health, warned consumers that “mercury-added skin whitening products are poison cosmetics that can damage the kidneys, reduce skin’s ability to resist bacterial and fungal infections, and cause a variety of dermal problems such as discoloration, rashes and scarring,” adding that “the disposal of mercury in such products through the wastewater also pollutes our rivers and the oceans and consequently contaminates the food chain.”

"Ecowaste Coalition has exposed a gaping hole in the regulation of adulterated cosmetics containing the dangerous neurotoxin mercury. Their chemical analysis of skin-lightening creams sold through online platforms, leaves no doubt that consumers are being exposed to mercury at levels that can impair their health and that of their unborn children," stated Lee Bell, Mercury Adviser of the International Pollutants Elimination Network (IPEN), which includes the EcoWaste Coalition among its participating organizations.

"Philippines regulators should launch an immediate crackdown on the sale of these toxic cosmetic products through online platforms and dedicate resources to monitor and identify the suppliers and distributors. There should also be cooperation and information sharing with governments of countries where the mercury laden cosmetics are produced and exported to stop this trade at its source," he suggested.

To safeguard women‘s health and put a stop to the unlawful trade and consumption of poison cosmetics with mercury, the EcoWaste Coalition has put forward the following recommendations:

Prior to its public release, the EcoWaste Coalition provided a copy of “Toxic Exposé" to the FDA for its reference and action.

The said report is part of the group’s “Project Toxic-Free for Human Rights and Sustainable Development in the Philippines” supported by the Swedish Society for Nature Conservation (SSNC).