The project undertaken by Alter Vida was implemented in Asunción, the capital city of Paraguay, with the objective to raise awareness about mercury releases from energy saving compact fluorescent lamps (CFL) and fluorescent tubes, and to promote the ratification of the Minamata Convention. An agreement was signed between Alter Vida and the authorities of the Ministry of Health (General Director of Environmental Health, DIGESA) for the production and distribution of educational materials on this source of mercury-containing products, and promote the ratification of the Minamata Convention. A working group was also established with an action plan on electrical equipment with low mercury content, with the participation of Alter Vida, the municipal authorities of Asunción, DIGESA, Commerce and Environmental National Authorities (SEAM), industry involved in mercury recycling and research institutes.

A basic document on the hazards of mercury releases in CFL and fluorescent tubes was produced that was used as a basis to publish a brochure and a poster, containing information related to the environmental and health risks of mercury exposure. These materials also described the situation of mercury releases in Paraguay, the Minamata Convention, the releases of mercury from broken equipment and how to manage a spill, and the use of LED technology as an alternative to CFLs. These materials were distributed to the private sector, to members of the Rural Network of Private Development Organizations and to the NGO Association of Paraguay (Pojoaju). In addition, the information was disseminated in digital format through social networks, mainly on the Facebook page of Alter Vida.

The Municipal Working Group work plan of activities now includes, in the near future, the elaboration of a municipal regulation with a mercury content limit for lighting equipment, as well as to lobby the Congress for the ratification of the Minamata Convention and adoption of best practices for mercury waste disposal. 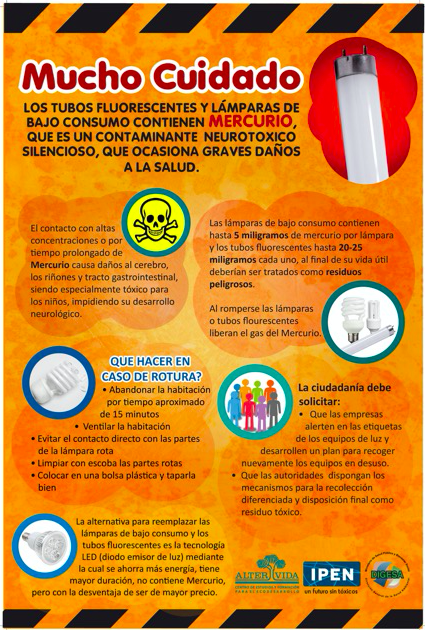