Dangerous amounts of lead found in paint samples in Indonesia 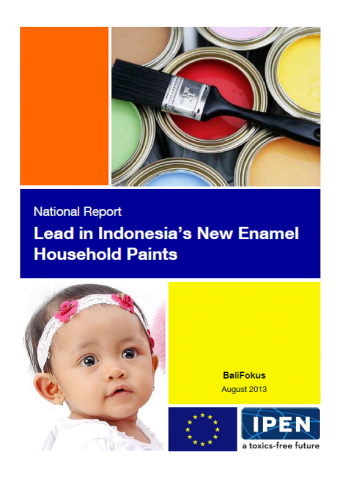 Jakarta — Most paint companies in Indonesia, including some major brands, sell paint for household use containing unsafe levels of lead, according to a study of lead in decorative paint in Indonesia released today.

The paint analysis was done in coordination with the IPEN Asian Lead Paint Elimination Project, which is being implemented in seven different countries (Bangladesh, India, Indonesia, Nepal, Philippines, Sri Lanka, and Thailand) with a total European Union funding of EUR 1.4 million (IDR 17.8 billion) over a period of 2012-2015. BaliFokus is implementing the project in Indonesia.

“Exposure to even small amounts of lead can reduce a child's intelligence and school performance; and can also cause behavior problems, so high levels of lead in paint are a cause for serious concern not only for families, but the country as a whole. This damage is lifelong and irreversible,” said Yuyun Ismawati, advisor of BaliFokus, in Jakarta.

In 2011, there were over 32 million Indonesian children at the golden age of development (0-6 years old). The participation rate in early childhood education program in the next 5 years has been projected to increase to 72.6%. As most of the early childhood education facilities are painted in bright colors, which are more at risk of containing lead, about 32 million Indonesian children are at risk of potential lead exposure, especially in older facilities.

Leaded paint has been banned in most of the developed or industrialized world for more than 40 years. Painted surfaces deteriorate with time or when disturbed, and lead from the paint then contaminates household dust and soils surrounding the home. Children ingest lead from contaminated dusts and soils during normal hand to mouth behavior. Damage to children’s intelligence and mental development occurs, even when there are no obvious or clinical signs of lead poisoning. The World Health Organization (WHO) has said that, “There appears to be no threshold level below which lead causes no injury to the developing human brain.” The European Safety Authority Panel on Contaminants in the Food Chain has concluded “there is no evidence for a threshold for critical lead-induced effects.”

The study released today examined 78 samples of enamel paint from 28 paint companies manufactured or sold in stores in Indonesia. The enamel paints sampled are primarily for home use. Approximately 77% of samples analyzed contained lead at levels higher than 90 parts per million (ppm), including some market leaders’ brands. The highest lead concentration found in the Indonesia paints analyzed was 116,000 ppm. The average level of lead in the paints in the study was 18,500 ppm or more than 200 times higher than 90 ppm, the recommended limit for lead content.
Indonesia, in June 5, 2013, has become the first country that launched a National 10-Year Program on Sustainable Consumption and Production (10Y SCP Indonesia) as follow up of the Rio+20 declaration. In the first phase, the program will focus on Green Building, Green Procurement, Green Industry and Green Tourism, which will be incorporated into the mid-term development plans for 2015-2019.

Within the context of the 10Y SCP Indonesia, therefore, BaliFokus and IPEN recommend the government of Indonesia to regulate the total lead content in paints to 90 parts per million; the private sector to switch to safer alternatives for paint materials, and encourage consumers to choose unleaded paints. “Ninety ppm meets the world’s strictest standards and would allow it to be sold anywhere in the world,” Ismawati said. “This switch will be a good example of sustainable production and consumption cross-cutting all sectors targeted in the 10Y SCP Indonesia.”

The newly released results are similar to those from a previous study of 10 household paint samples from 4 Indonesian brands published by Dr. Scott Clark of University of Cincinnati in 2009. The European Union restricts or bans the use of lead compounds in paints. The United States prohibits the sale and use of house paints that contain more than 90 ppm lead.

BaliFokus purchased 78 cans of enamel household paints from stores in Jakarta, Bandung, Denpasar and South Tangerang between August 2012 and March 2013, then sent samples of the paints to Certottica laboratory in Italy for measurement of lead content. Certottica is accredited by ACCREDIA, the Italian National Accreditation Body appointed by the state. The paint sampling and analysis activities were supervised by Dr. Sara Brosché, Asian Lead Paint Elimination Project coordinator, and Dr. Scott Clark, Professor Emeritus in Environmental Health, in University of Cincinnati, United States.