Quezon City. “Once is enough. Twice is too much. But we fear there could be more!”

Aileen Lucero, Coordinator of the waste and pollution watchdog EcoWaste Coalition exclaimed in indignation as citizens hit the streets anew to stage a protest amid a new controversy involving the discovery of 48 more container vans of garbage from Canada.

“The newly revealed garbage consignments from Canada, untaken for over a year now, elicits suspicion from the public that something fishy must have been going on, possibly for a long time already,” she said.

“Now 98 container vans of garbage in total, who knows what could be inside those other vans that have yet to be inspected?  More residual household wastes? More electronic junks? More soiled diapers?  A thorough and credible investigation is imperative in line with the ‘tuwid na daan’ (straight path) to clear suspicions, to compel Canada to re-import their rubbish and to ensure that our country is not unjustly treated as a cheap dumpsite,” she said.

In their protest today in front of the Bureau of Customs (BOC), the EcoWaste Coalition and other environmental justice groups unfolded a huge yellow banner bearing “Pilipinas, Hindi Tambakan at Sunugan ng Basura” in the midst of placards declaring “Philippines: Not Canada’s Dumpsite.”

To reiterate their opposition against moves to locally dispose of the intercepted garbage consignments, the groups brought with them a mock trash-filled container marked “Return to Canada” with the iconic maple leaf.

“What is worst with these additional 48 container vans is not these are new importations, but these have been lurking for some time now,” stated Ang NARS Party List Rep. Leah Paquiz, who has been pressing the government to stop the dumping incidents “to regain the dignity of the Philippines.”

“These environmental predicaments are too much to take thus, questions can no longer be left unanswered: How many more are there not declared and not accounted for?  Is this dumping incident a regular phenomenon? Will this administration just let, if not blatantly allow, Philippines to be the dumping site and waste disposal arena of other countries?,’ she asked.

The new 48 container vans of garbage, consigned to Live Green Enterprise, entered the port in four batches from December 2013 to January 2014, few months after the other 50 vans of misdeclared recyclable “plastic scraps,” consigned to Chronic Plastics, Inc., arrived in six batches from June to August 2013 and subsequently intercepted by the BOC.

Auction and Cargo Disposal Division Chief of the Manila International Container Port had already recommended the “issuance of decree of abandonment” for the unclaimed 48 vans of “plastic scraps.”

Since the BOC revealed the botched garbage consignments in 2014, concerned environmental, labor, church and grassroots leaders and legislators, as well as over 25,000 citizens from both Canada and the Philippines, have spoken against the prolonged dumping controversy.

Most recently, on May 14, Senator Miriam Defensor Santiago through Resolution 1341 emphasized Canada’s responsibility to take back their garbage as party to the “Basel Convention on the Control of Transboundary Movements of Hazardous Wastes and Their Disposal.”

In Manila, Councilors DJ Bagatsing and Numero Lim and 29 others filed a resolution unanimously adopted by the City Council, also on May 14, urging the Canadian government to remove the reeking garbage that “pose dangerous health and ecological risks” to the city’s residents. 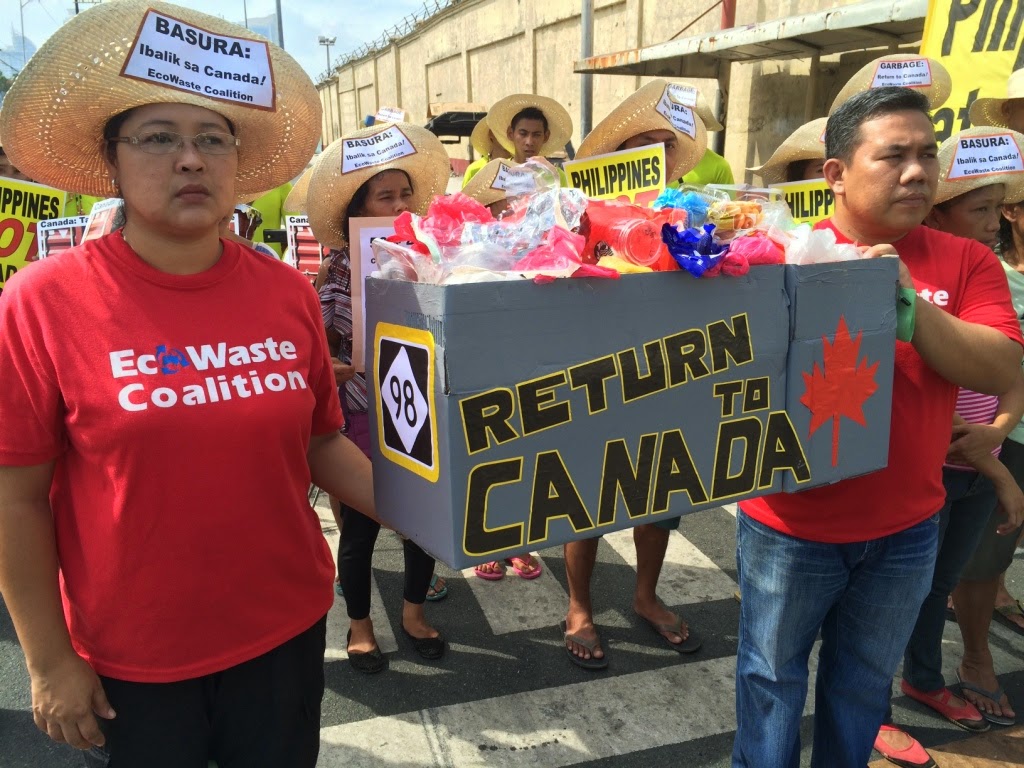