Government quietly made 'back door' agreement with U.S. that could undermine treaty on plastic waste 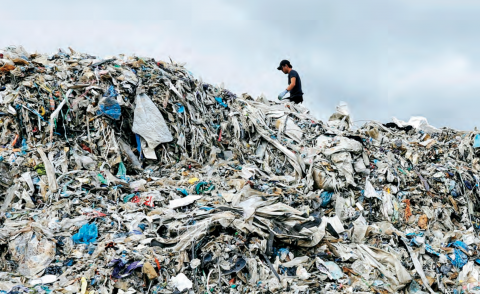 Environmental groups are accusing the Trudeau government of acting in bad faith after it quietly signed a bilateral agreement with the U.S. that could allow it to evade some of its obligations to stop shipping plastic waste to poor countries around the world.

The agreement — which was never publicly announced or gazetted — was signed on Oct. 26, 2020, the U.S. State Department told CBC News.

Environment Canada declined CBC's requests to see the text. But experts on plastic waste say it runs counter to the spirit of the Basel Convention on plastic waste and appears to be designed to allow Canada to evade its obligations.

"This is, in effect, a backdoor for Canada to offload its waste problems to the U.S., who will offload to the very countries potentially that the Basel Convention amendment is meant to stop," said Myra Hird of Queens University, a fellow of the Royal Society of Canada who represented Canada at the G7's microplastics summit last year.

"It was not the spirit of the amendment and what we were proclaiming to sign on to."

The plastic waste amendments to the Basel Convention, which take effect on January 1, 2021, effectively limit nations to shipping plastic recyclables only to other signatory countries that are bound by the same rules.

They also require prior informed consent from the receiving country.

Canada accepted those amendments after a flood of negative publicity about Canadian plastic waste — much of it mislabelled as recyclable — being dumped in developing countries such as the Philippines and Cambodia.

A dispute with the Philippines over the issue led to Manila recalling its ambassador to Ottawa, and only ended in May when the Canadian government paid to ship 69 containers of garbage back to Vancouver.

Canada informed the UN on March 9 of this year that it "supports and fully intends to comply" with the ban.

But the Trudeau government also sought to ensure it could use a loophole that allows countries to ship plastic waste to non-signatory nations if they do so under an existing bilateral agreement.

The United States is one of only two countries never to ratify the Basel Convention; Haiti is the other. As such, the U.S. is not bound by the new rules on plastic waste. By signing the deal with the U.S. prior to ratifying the Basel plastic amendments, Canada keeps open the option of sending its waste to brokers south of the border.

Once Canadian plastic waste enters the States, it can change hands several times. There is no reliable mechanism to track it and no way to ensure it is not re-exported to developing countries, where it often ends up in landfills or in the ocean.

But most environmental groups that have consulted with the government on plastics say they were blindsided when they learned of the agreement at a U.S. State Department briefing three weeks after it was signed.

"This was signed about five weeks ago now and it still is secret and no one has seen it, apart from those who signed it," said Kathleen Ruff, former head of the B.C. Human Rights Commission. She now heads Right On Canada, a group that campaigns against plastic pollution.

Moira Kelly of Environment Canada confirmed the existence of the agreement to CBC News.

"In accordance with its obligations under the Basel Convention, Canada concluded an arrangement with the United States affirming that the waste subject to the arrangement and circulating between Canada and the U.S. is managed in an environmentally sound manner," she said.

"This arrangement balances the need to manage the traded plastic waste in an environmentally sound manner in both Canada and the U.S. while reducing barriers to recycling, developing secondary markets and meeting domestic goals, such as recycled content. Maintaining circulation of these materials between Canada and the U.S. can also disincentivize exports overseas."

The Basel treaty amendments require any such bilateral agreement to meet standards as high as, or higher than, those in the treaty, which is legally binding.

Kelly said the U.S.-Canada deal "affirms" that "waste moving between Canada and the U.S. is managed in an environmentally sound manner." When pressed on the meaning of the word "affirms," however, Environment Canada conceded that the agreement with the U.S. is not legally binding.

Hird said that makes all the difference.

"If this bilateral agreement allows us to get around that in any way, then we're taking a step backwards, we're not taking a step forward," she said.

Leading from the rear

Although the Trudeau government has portrayed itself as a global leader in the struggle to control plastic waste, Canada is one of just three countries among the 188 Basel signatory nations that have yet to ratify the plastic ban amendments. The other two are China and Turkey.

The government tabled the amendments in Parliament on Oct. 28. Kelly said "the Government of Canada is working to complete the ratification process as soon as possible and we continue to aim for ratification on or before January 1."

People who work in the field question why Canada is the only developed country in the Basel Treaty not to ratify the plastic accords.

Ruff said the situation is an example of the yawning gap between government words and actions when it comes to protecting the environment.

"I think one of the huge issues in the world is that environmental laws have not been taken seriously," she told CBC News. "Everyone pays lip service to them, but when the rubber hits the road, too often we see governments not complying.

"And this is exactly what seems to be happening right here, right now, with this arrangement with the United States."