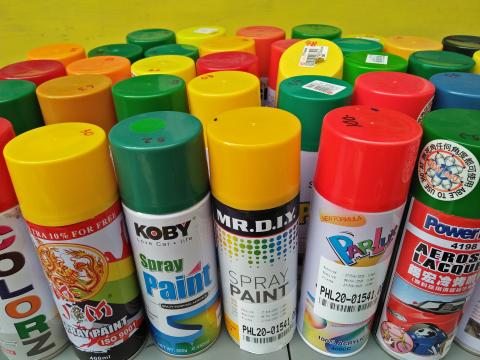 Quezon City, Philippines/Gothenburg, Sweden In the first public study of its kind, environmental health groups EcoWaste Coalition and IPEN uncovered spray paints with dangerous lead concentrations — some samples containing levels hundreds of times higher than global standards — on sale in the Philippines in violation of the country’s law banning lead in paints.

The report shows that nearly half of the spray paints tested exceeded the total lead content limit above 90 parts per million (ppm), and nearly a third contained levels higher than 10,000 ppm. Samples were obtained from various retail outlets, including hardware stores, home improvement centers, general merchandise marts, school and office supplies shops, in 20 cities and one municipality in Metro Manila and various parts of Luzon.

Several of the spray paints containing lead were imported from countries with existing, legally-binding lead paint regulations, such as China and Thailand. The Philippine Association of Paint Manufacturers (PAPM) confirmed that none of the analyzed samples in this study was produced by one of its affiliates.

While the hazards of spray paint fumes due to their volatile organic compound (VOC) ingredients like acetone, toluene and xylene, which can be directly inhaled, are quite known, studies had barely paid attention to lead lurking in such paints, the groups noted.

“The unlawful sale of spray paints containing lead points to the need for strict monitoring of business compliance to the Chemical Control Order prohibiting lead content above 90 ppm in all types of paint products. Paints in aerosol cans are definitely not exempted,” said Thony Dizon, Chemical Safety Campaigner, EcoWaste Coalition.

The report Lead in Spray Paints for Consumer Use in the Philippines provides the first publicly available data on the lead content of paints in aerosol cans sold in the country, which are typically used as a touch-up paint for appliances, cars, accessories and decors, as well as a material for school projects.

The groups called on authorities to ensure that only lead-safe paints are sold in the market. In the Philippines, lead-containing decorative paints were phased out in December 2016 and lead containing industrial paints in December 2019.

"Further efforts are needed to rid the market of non-compliant paint products such as those coming from overseas,” said Derrick Tan, President, PAPM.

“Lead paint is a major source of childhood lead exposure affecting large numbers of children in the world. To protect children’s health, governments and other stakeholders across the globe, including the Philippines, are taking measures to ban lead in all paints,” said Dr. Sara Brosché, Global Lead Paint Elimination Campaign Manager, IPEN. “Together with the EcoWaste Coalition and PAPM, we support the effective implementation of laws and regulations that will keep children and other vulnerable groups safe from irreparable harms caused by exposure to lead in contaminated paint, dust and soil.”