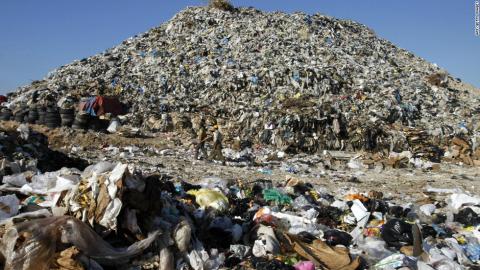 Beirut, Lebanon | Seattle, USA Sierra Leone just announced that they want no part of a reported deal that would send Lebanese household waste to the West African nation. Last month, the Government of Lebanon approved a plan to export many tons of household trash from Beirut and Mount Lebanon to an African or Middle-Eastern country. The global dumping plan has been denounced by local and international waste experts as not only likely illegal but also environmentally irresponsible.

Despite the opposition, Agriculture Minister Akram Chehayeb, chair of the ministerial committee in charge of the waste management plan, announced that the government has agreed to contract two international companies in accordance with local and international laws to export Lebanon's trash -- Howa BV from the Netherlands and Chinook Urban Mining International of the United Kingdom.

“Government wants to make it abundantly clear that it has not agreed to accept waste from Lebanon and has not authorised any official of state to convey approval to that effect. Government is fully aware of the danger posed by hazardous and nonhazardous waste and gives the full assurance that it will never expose the public to such long-term risks to health and the environment.”

According to Basel Action Network (BAN), an international waste trade watchdog organization, the scheme to export household garbage to Sierra Leone is illegal under the Basel Convention, a United Nations treaty that Lebanon ratified in 1994. The Basel Convention was created to prevent and control the trade in hazardous and household wastes.

“It appears that the officials in Beirut are being misled by fast-talking waste brokers,” said BAN Executive Director Jim Puckett. “The export of household waste is strictly controlled by the Basel Convention whether it is hazardous or not. Lebanon might wish to read the treaties they have signed.”

Sierra Leone is not a Party to the Basel Convention; thus, it is off-limits to waste exportation under the terms of the convention. Further, the African Union’s Bamako Convention forbids the import of household waste into the entire continent from outside the continent.

“Africa is not going to look kindly on schemes of this kind, they are a throwback to an earlier and ugly chapter in history,” said Gilbert Kuepouo from the IPEN West African Regional Hub in Cameroon. “We applaud Sierra Leone for rejecting the money and saying no to Lebanon.”

Apart from legal matters, waste experts around the world consider it irresponsible in today’s world to dump one’s garbage on other nations. Toxic pollution networks around the world, like BAN and IPEN, hope to convince Lebanon to rethink the decision, yet they remain on full alert to prevent Lebanon from dumping its waste elsewhere. These global networks strongly support all states and communities fighting global waste dumping attempts of this kind. Because of the Bamako Convention, it is feared that Lebanon might turn to a nearby middle-eastern country, such as Yemen, United Arab Emirates or Jordan.

Ironically, it was in large part due to Italian waste traders dumping of 16,000 barrels of Italian hazardous industrial waste in Lebanon in 1988 that led to the creation of the Basel Convention. Today, Lebanon is engulfed in a household waste collection and management crisis of their own making.

“It’s extremely embarrassing that our government is looking to dump its problem on others,” said Naji Kodeih of Lebanese environmental organization IndyACT. “We in Lebanon are fully capable of managing our own waste through minimization programs and safe domestic recycling. It’s not rocket science. Any responsible government will work with communities to create jobs through zero waste programs at home, rather than seeking global hiding places for their trash.”

IndyACT : 'the League of Independent Activists' is a Lebanon-based environmental organization www.indyact.org

IPEN : is a global network of over 700 public interest organizations in 100 countries working to eliminate toxic substances. www.ipen.org twitter: @ToxicsFree