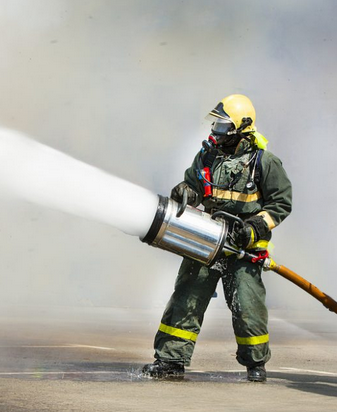 (Rome, Italy) Faced with rampant drinking water pollution around the world from toxic fluorinated chemicals, a UN expert committee recommended a global ban on PFOA / PFOS. The committee recommended strict restrictions for their use in firefighting foams – a major source of water pollution around the world. At issue are two toxic fluorinated chemicals that have been used in firefighting foams; perfluorooctane sulfonate (PFOS) and perfluorooctanoic acid (PFOA). The fluorine industry has substituted other fluorinated chemicals to replace PFOA and PFOS but the Committee sharply warned against using them, “due to their persistency and mobility as well as potential negative environmental, health and socioeconomic impacts.” Before the meeting, IPEN released a comprehensive report featuring eminent fire safety experts, that describes fluorine-free firefighting foam alternatives that can replace all uses of toxic firefighting foams.

The UN expert committee also recommended bans on export, import, and use of PFOS- and PFOA-containing foams in training and testing. A five-year exemption for PFOA use in equipment that already contains the foams was proposed, but only if accompanied by rigorous measures to prevent environmental release. In 2017, the Committee concluded that PFOA was linked to, “high cholesterol, ulcerative colitis, thyroid disease, testicular cancer, kidney cancer and pregnancy-induced hypertension” and “presumed to be an immune hazard to humans.”

“PFOA and other fluorinated chemicals have caused a public health crisis affecting millions around the world,” said Pamela Miller, IPEN Co-Chair. “Governments should immediately act to ban fluorine-containing firefighting foams and switch to safer fluorine-free alternatives. The fluorine industry should pay for cleanup and compensate people harmed by its products.”

Chemical in Consumer Products is a Global Pollutant

The UN expert committee determined that perfluorohexane sulfonate (PFHxS) warrants global action – signaling that this substance is one of the world’s worst chemicals. The chemical industry promoted PFHxS as a substitute for PFOS, another chemical already listed in the Stockholm Convention. PFHxS has a variety of uses including in firefighting foams and as water- and stain-protective coatings for carpets, paper, leather and textiles. It is extremely persistent and is found in human blood, breast milk and umbilical cord blood. PFHxS negatively affects liver function, the thyroid, and the developing immune system, resulting in reduced effects of vaccines in children. A significant association between PFHxS exposure and breast cancer has been found in Greenlandic Inuit women.

“The fluorine industry replaced one bad chemical, PFOS, with another bad chemical, PFHxS. That’s cynical self-interest that damages human health,” said Dr. Sara Brosché, IPEN Science Advisor. “This entire class of fluorinated chemicals is too dangerous to deal with one at a time and countries should take action to address them as a class and remove all of them.”

Unfortunately, when governments added PFOS to the Stockholm Convention in 2009, many uses were exempted and allowed to continue. The UN expert committee recommended closing the loopholes for PFOS use in photo imaging, semiconductor manufacturing, aviation hydraulic fluids, certain medical devices, LCD manufacturing, decorative metal plating, electrical parts in printers and copy machines, insecticide for ants and termites, and chemically-driven oil production. The Committee started the clock running on banning PFOS use in hard metal plating. The Committee also recommended that a currently-used insecticide, sulfluramid, that degrades to PFOS, should be named explicitly in the treaty and its use should be narrowed to agriculture to prevent rampant consumer use and exposure.

“This year the UN expert committee sent a clear signal to the fluorine chemicals industry that it’s time for a phase-out,” said Dr. Joe DiGangi, IPEN Senior Science and Technical Advisor. “We need to learn from decades of denial and poisoning and stop this cycle of harm.”

The week-long meeting of the Stockholm Convention’s expert committee was held from 17-21 September 2018 and attended by many industry associations and companies involved in the production and use of fluorinated chemicals. The committee, known as the Persistent Organic Pollutants Review Committee (POPRC), is an expert committee that reviews chemicals proposed for listing under the Treaty and makes recommendations to the Conference of the Parties. Members of the POPRC are government-designated experts in chemical assessment or management.

IPEN is public interest NGO network working in more than 100 countries to reduce and eliminate hazardous substances. IPEN has been actively involved in the POPRC process for fourteen years.

Read this release in Spanish.

For additional information, a guide to IPEN positions for the meeting and for contacts for interviews please contact LauraVyda@IPEN.org +1-510-387-1739.